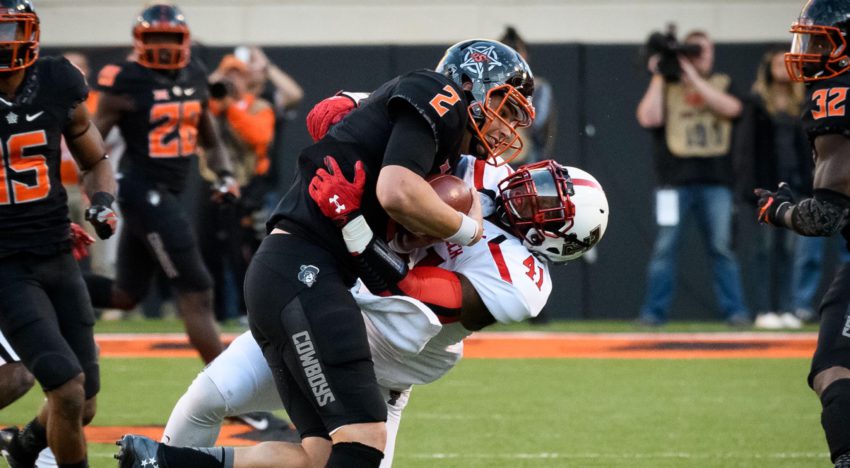 Quarterback Mason Rudolph put up one of the more impressive seasons in Oklahoma State history in 2016. He led the Cowboys to a 10-3 record and a second place finish in the Big 12, throwing for 4,091 yards, 28 touchdowns, only 4 picks, and posting a QB rating of 158.9, good for 18th in the nation.

Even more impressive? It sounds like he accomplished much of this with a cracked rib.

Jenni Carlson of The Oklahoman reported that Rudolph broke his rib on October 1st against Texas, just the second conference game of the season. He got sandwiched between two Longhorn defenders on this 10-yard touchdown run.

Rudolph said they made the decision to keep the injury quiet.

“No one really knows that at all,” Rudolph told The Oklahoman. “We kept that in house. It was like, ‘Something’s not right, I could barely move.”

Yikes. However, after the Texas game, Rudolph finished the year on a tear, throwing for a combined 2,089 yards, 19 touchdowns, 2 interceptions. The Cowboys closed out 2016-2017 in style with a 7-1 record, including a blowout in the Alamo Bowl over Colorado.

Just imagine what No. 2 can do at full strength for his senior season, with another year of Biletnikoff semi-finalist James Washington, Marcell Ateman returning, and Tyron Johnson joining the existing loaded receiving corps.

Get your popcorn ready.