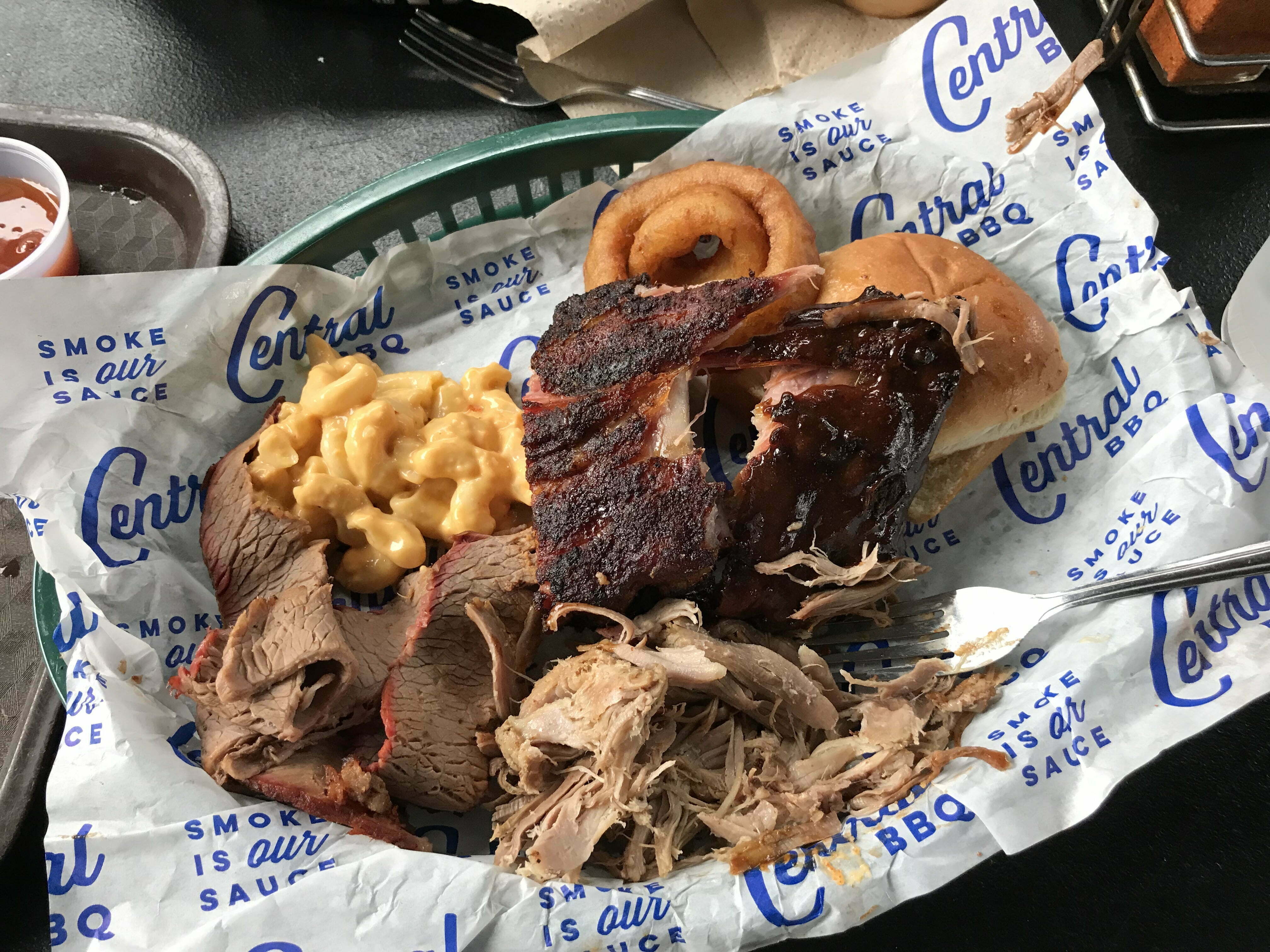 MEMPHIS, Tenn. — When we decided to cover the 2018 bowl game, I envisioned a dream 12-1 season and Sugar Bowl appearance in New Orleans. Or maybe a cost-efficient trip (for me) to the Alamo Bowl. At one point after the Kansas State game when OSU was projected for the Lockheed Martin Armed Forces Bowl against Cincinnati, I think I was rooting for no bowl at all.

Regardless, I don’t think “Memphis, Tennessee on New Year’s Eve” was ever on the list. But then OSU lost to TCU, the Houston Bowl took Baylor and we found ourselves Googling fun facts about Mike Conley and where the best BBQ in Tennessee is served.

On Sunday evening, our photographer Jackson Lavarnway headed to Memphis for the Liberty Bowl ahead of me as I drove home from some family activities in Oklahoma. I followed him early on Monday morning to cover the game between Missouri and Oklahoma State.

I didn’t really know what to feel. Was I excited? Was I tired? Was I ready for a lot of work in a 24-hour span? One thing I did feel was pride. That you guys have helped us build all of this into something stable enough to send two people to cover a bowl game. That’s remarkable to me, and I’ll always be glad for it.

I think I woke Jackson up when I got to our AirBNB at 10 a.m. on Monday morning — college kids! — and we worked there for a while before heading to the stadium early to get some lunch. We picked the wrong will call gate because we always pick the wrong will call gate and momentarily considered printing some “Gundy’s ark” shirts when we saw the conditions. 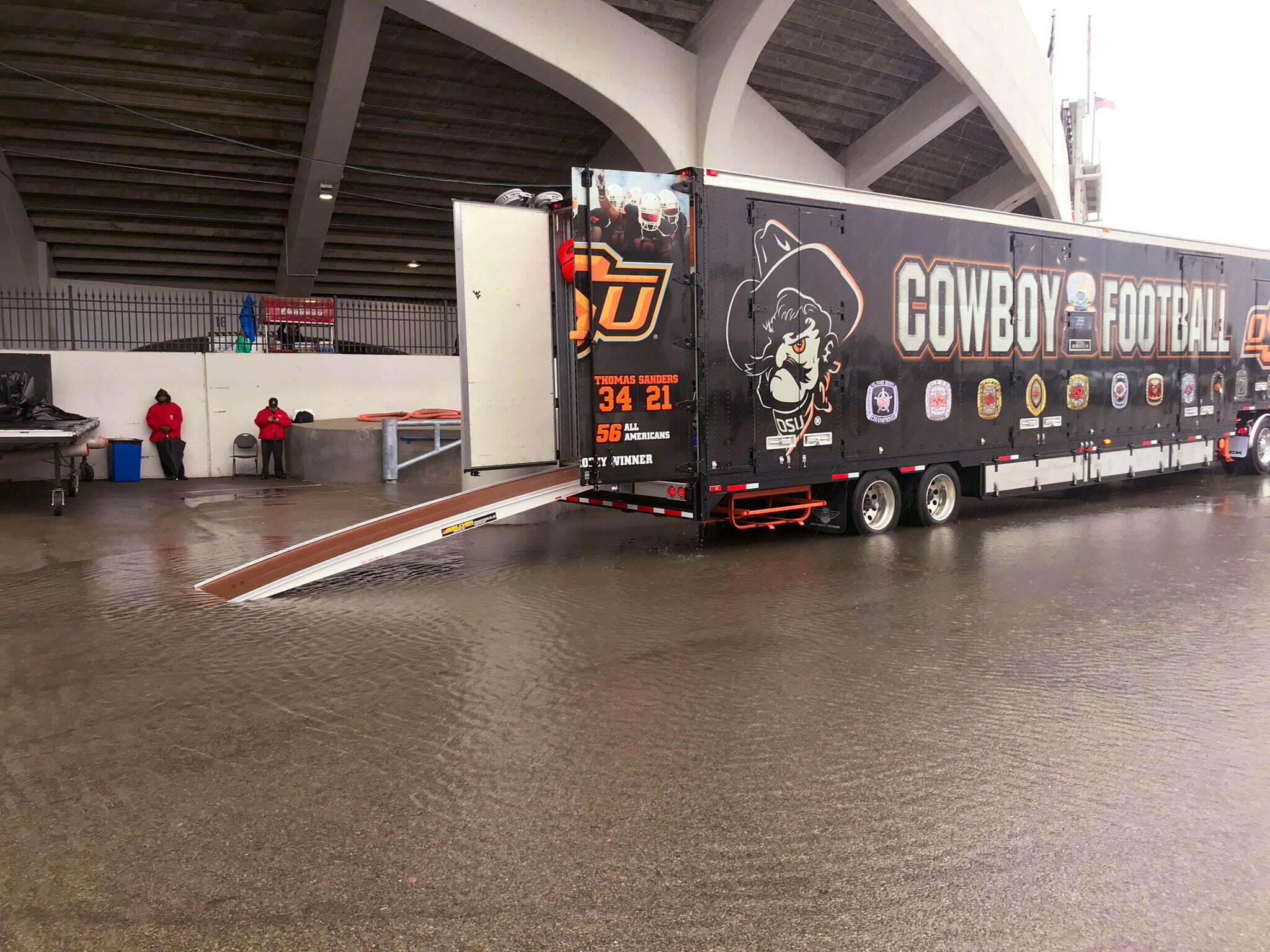 Where are the animals?

We were some of the first humans inside the stadium, and I wrote for a while as Jackson waited for the storms to clear. We had something called Rendezvous BBQ in the press box for lunch. It was good not great. I ate too much of it because it’s impossible to not eat too much of anything in a press box. They could serve haggis and cow tongue, and I’d be like, “Welp, nothing is going on, guess I’ll go back for my third cow tongue.” 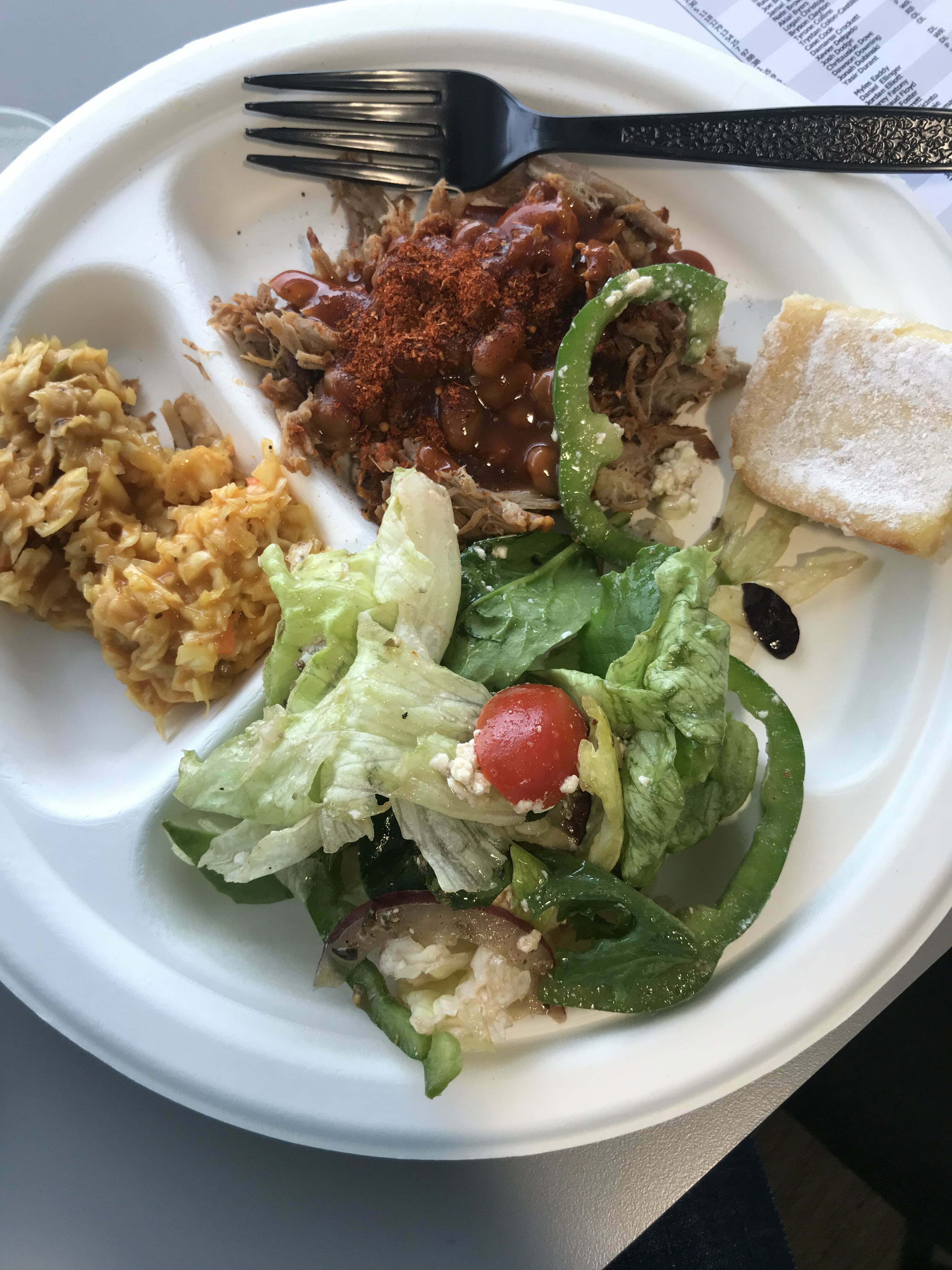 The weather eventually cleared the way for a really nice evening inside the stadium. I don’t know how to say this without sounding like a clown, but the entire event had a “best high school game you’ve ever been to” kind of vibe. That’s not a knock on the fans of either school as much as it is the setup of the stadium. The Chiefs and Rams could play their Super Bowl rematch in that stadium and it would feel like the 6A state title.

The atmosphere itself was tremendous though. Drew Lock said it was one of the better ones he’s ever played in, and fans of both teams brought it all night. The whole thing was a surprisingly delightful experience.

As I finished up writing in the press box after whatever it was that took place on the field and we all opined about who OSU’s next OC would be, I heard what I thought were gunshots coming from beyond one end of the stadium. It could have been fireworks, I suppose, given that it was New Year’s Eve, but in my extremely limited experience in the world of guns, it certainly did not sound like it. 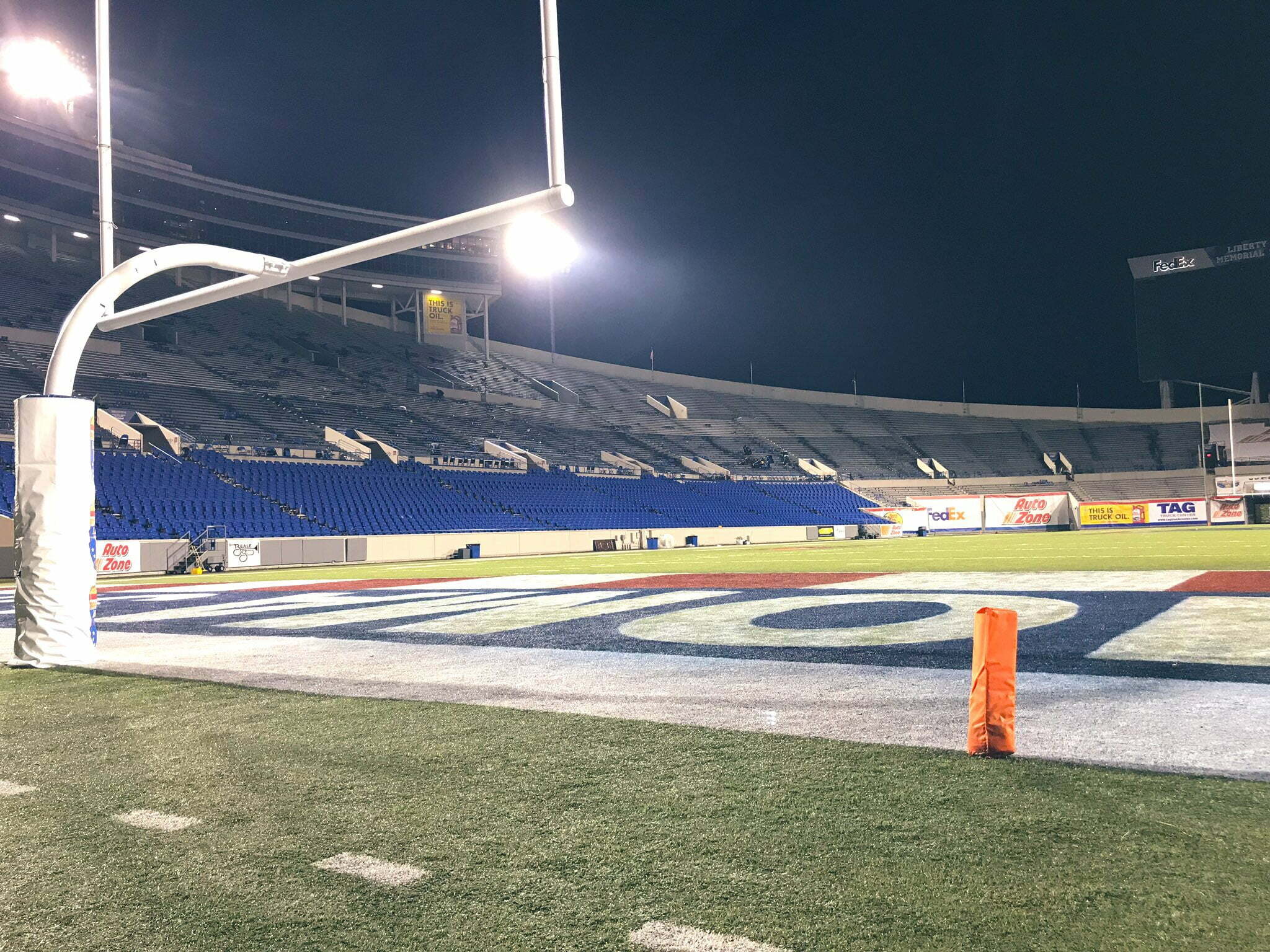 Me behind the camera, scared to leave.

I looked around a little while later and realized I was one of two people left in the box. Cool, getting an Uber in Memphis at 11 p.m. on NYE after hearing gunshots. Sounds fun! After all of that, I did a postgame Q&A on the field before exiting. I’m exaggerating (kind of) about being scared, but it certainly wasn’t the biggest thrill of my 2018. 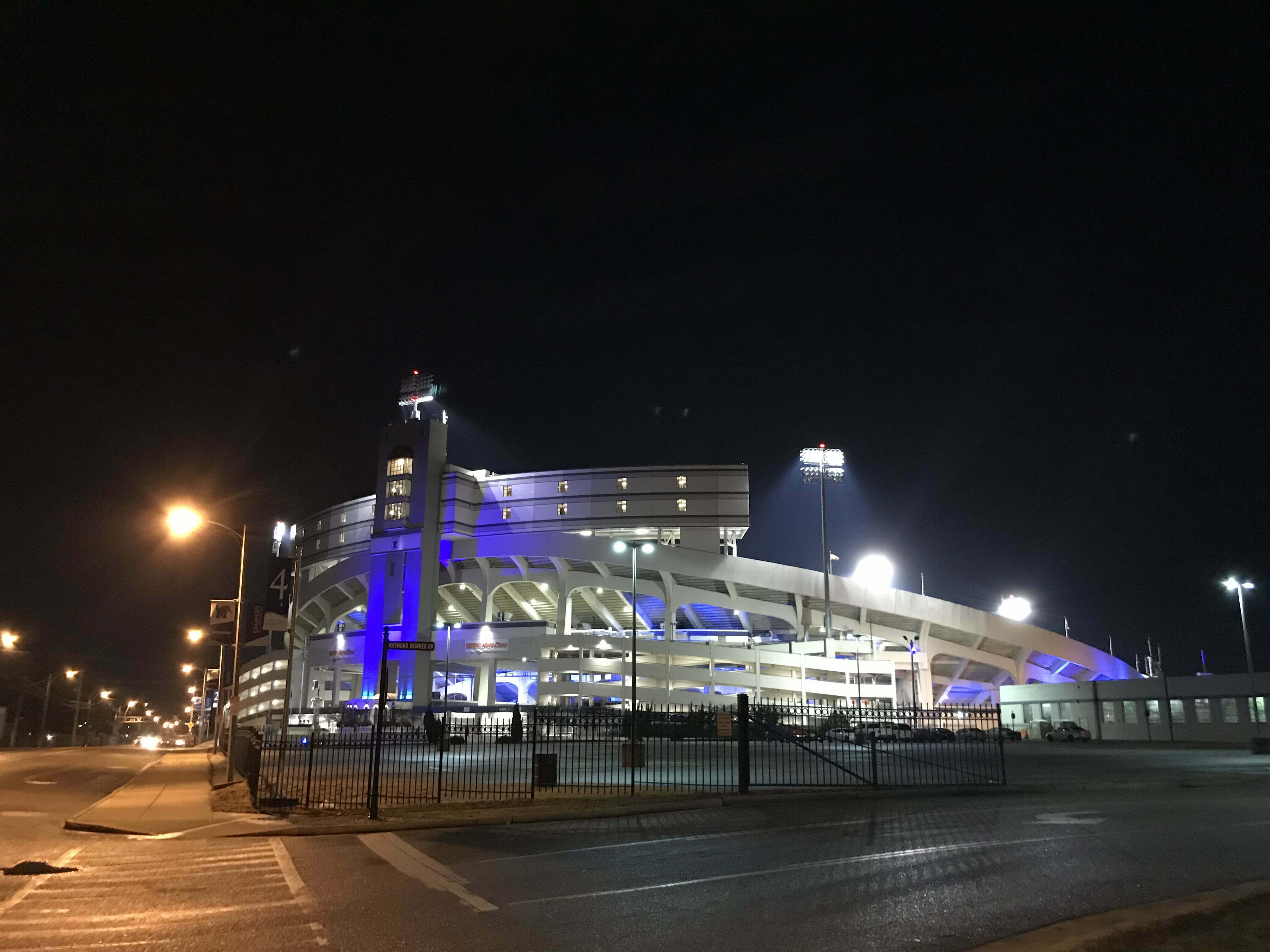 Jackson and I ended up at a place called Boscos Restaurant for NYE after briefly debating ordering Domino’s. Boscos is a pizza place and brewery that should have been better than it actually was, but after 12 hours in Liberty Bowl Memorial Stadium, I would have eaten haggis. Plus, the beer was great and they gave us complimentary champagne at midnight.

We walked back to our AirBNB and talked about the season, the year, our dream jobs, Josh Jacobs (for an inordinate amount of time) and how glad we were that we came to Memphis on NYE. 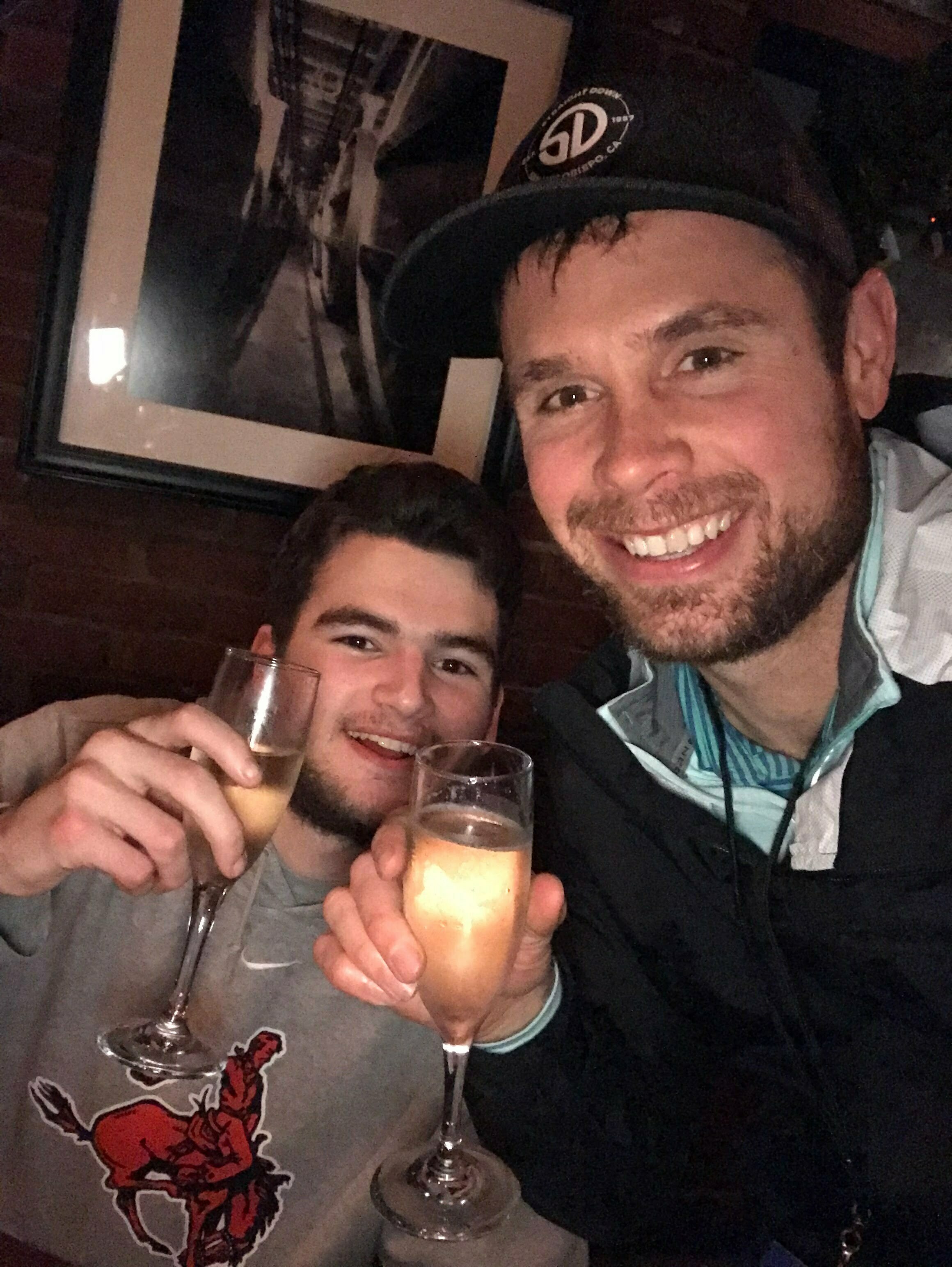 I woke up early on Tuesday to blog my brains out — nothing more humbling than banging out a couple thousand words at a Starbucks on freshmen and sophomores in college with some homeless dudes hollering in your ear on the first morning of a new year. I didn’t ask for this glamorous life, but I’ll take it.

Post-content creation, Jackson and I hit up a place every single Uber driver and Memphis native we ran into said we had to try — Central BBQ. I thought, much like talk of Chuba’s speed, there was no way it could live up to the hype. I think it may have lived up to the hype. 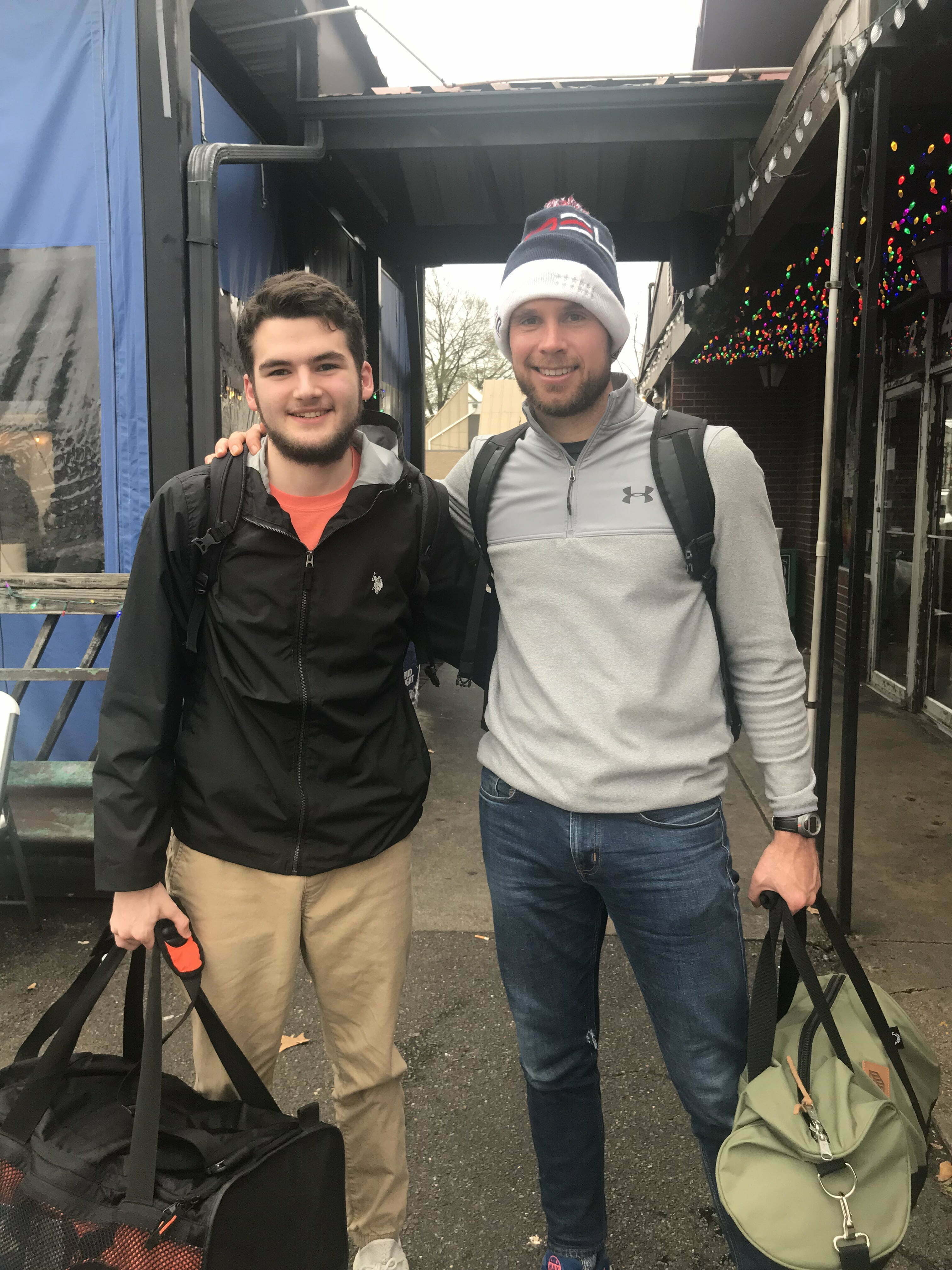 We got ribs, pulled pork, brisket, mac, and onion rings. It wasn’t the best BBQ I’ve ever had — shoutout Pecan Lodge in Dallas — but it was tremendous.

I’m not really a foodie, but the entire thing felt authentic, too. You know how sometimes legit hole-in-the-wall places like that sell out, clean things up and head for the c-suite (not that there’s anything wrong with this at all)? Central definitely hasn’t done that. The dirtier the building, the better the BBQ (in my head anyway), and the tiny area where you stand in line to order at Central reeked of elbow grease and plastic food baskets. Those bricks have seen some stuff. It was awesome. 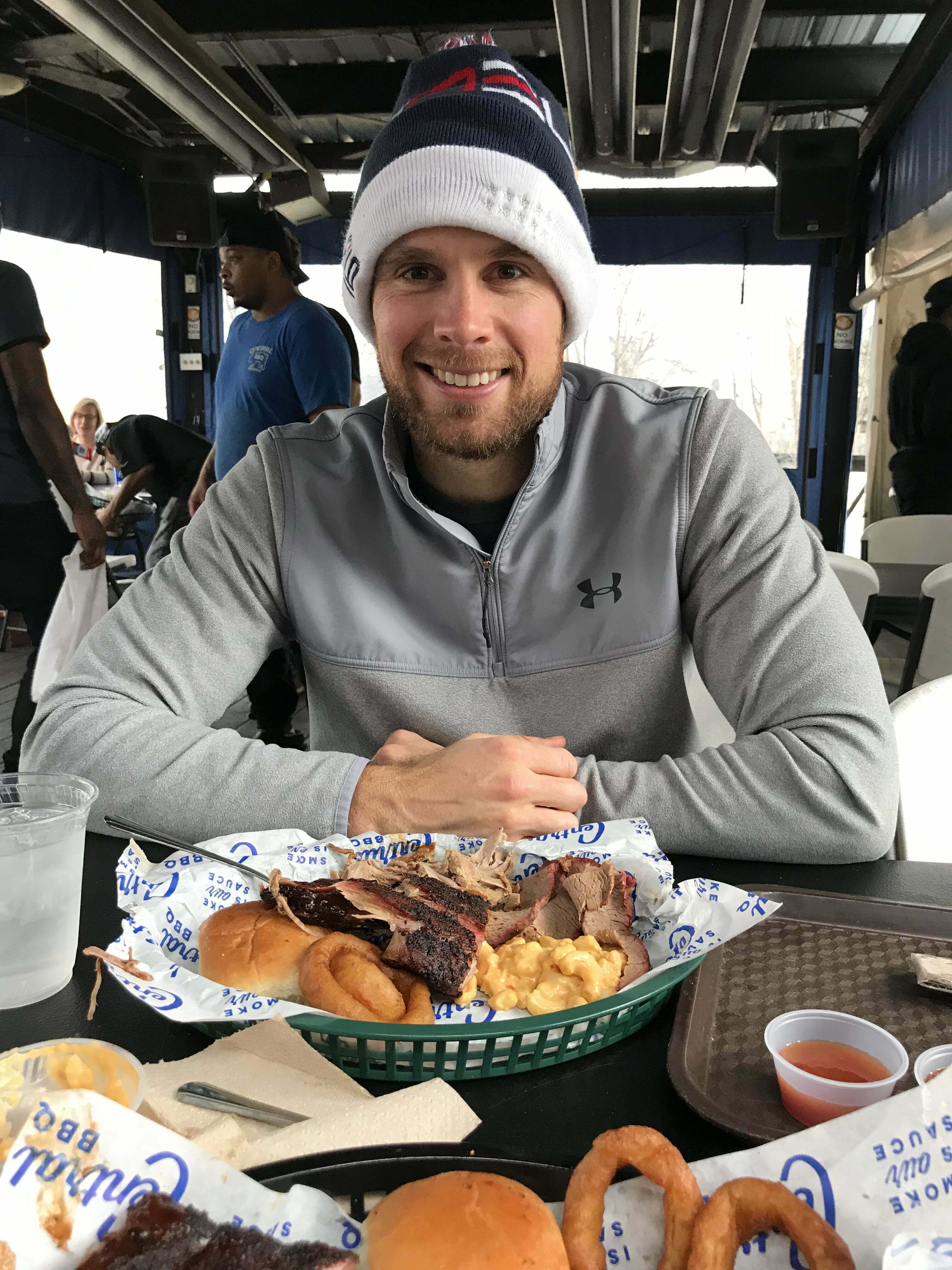 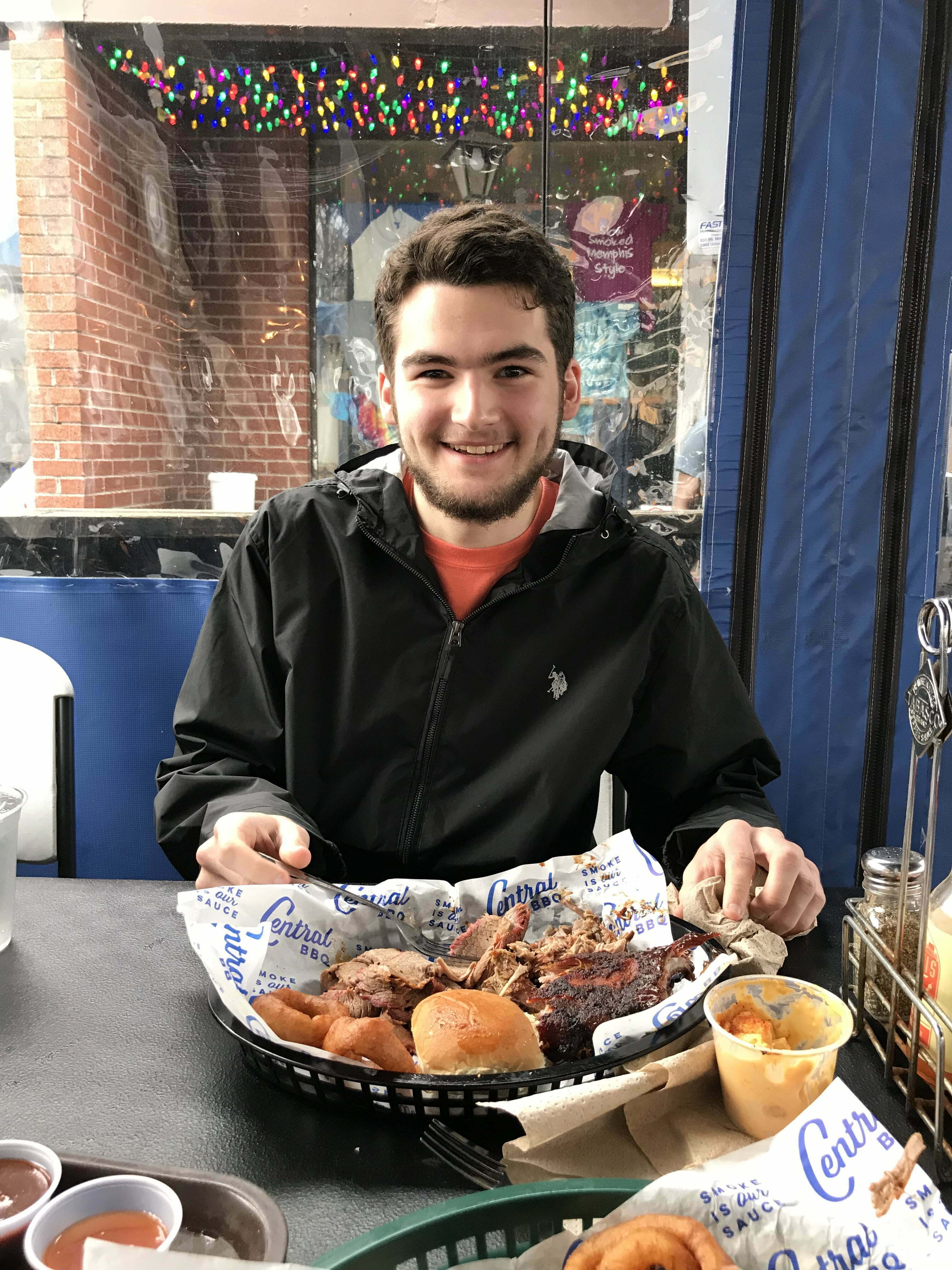 We capped our day with ice cream at a cool place called Railgarten, which appears to be a sort of food truck park for families. We watched part of the LSU-UCF game before riding back to the Memphis airport and flying back to Dallas. 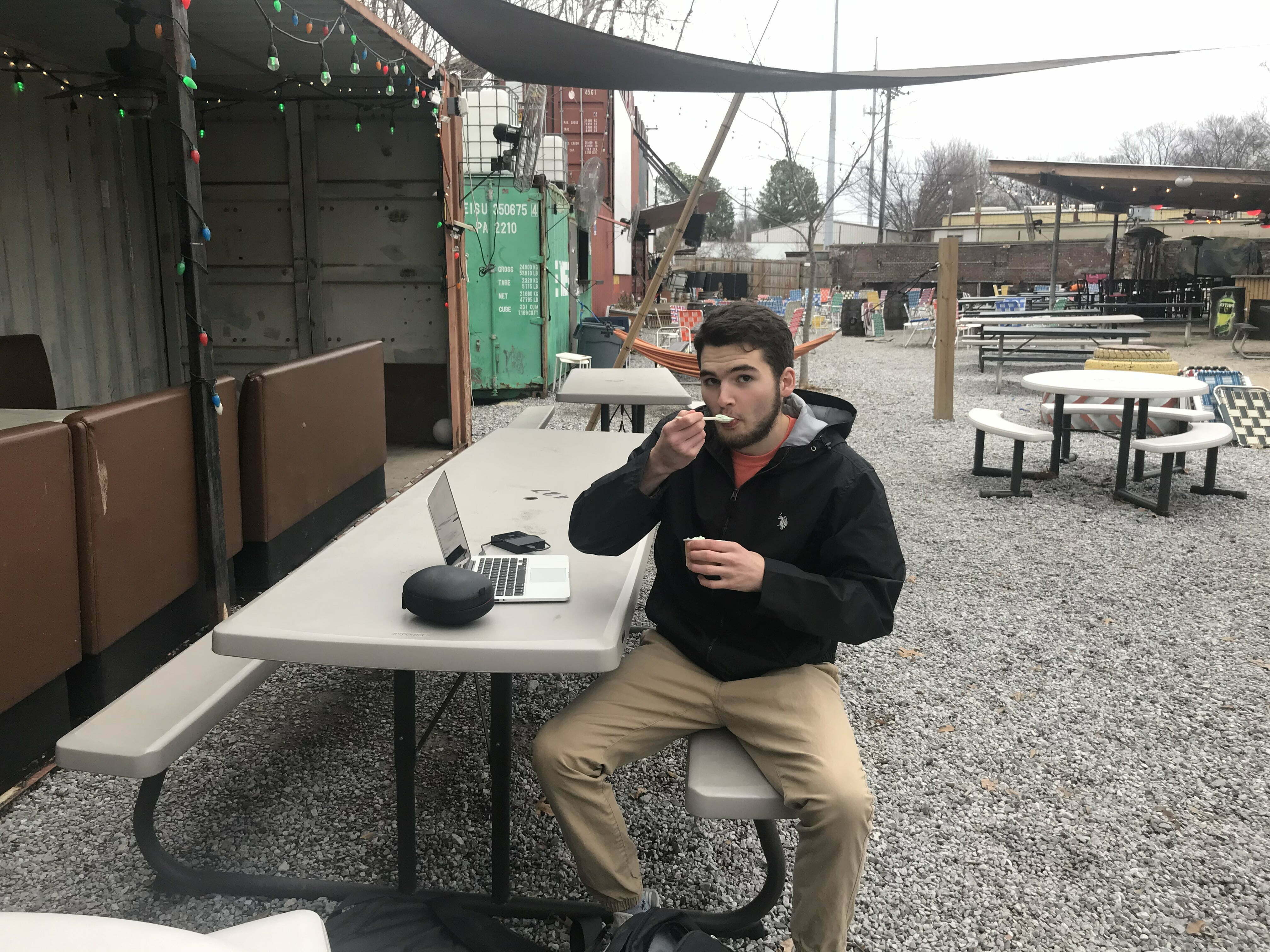 I told my wife this when we FaceTimed on Tuesday, but the entire two-day experience was far better than I expected. There were long work days, sure, but I don’t really think of my work as work. Is it difficult at times? Sure, but drinking coffee and jostling the keys of my MacBook Pro is what I used to do to recharge in my time away from an actual job. Now I just get paid for it.

Crooked American Airlines wouldn’t let me on an earlier flight with Jackson so I had some time to hammer out some golf work I needed to get done and write this travel post in the Memphis airport.

I am Draymond talking about PFB in 2019. Kyle Boone and Kyle Cox are KD.

Thank you to those of you who contribute to our site (and if you don’t, you can right here), and thank you to those who read, listen and consume. We could do it without you, but it would all be pretty pointless.