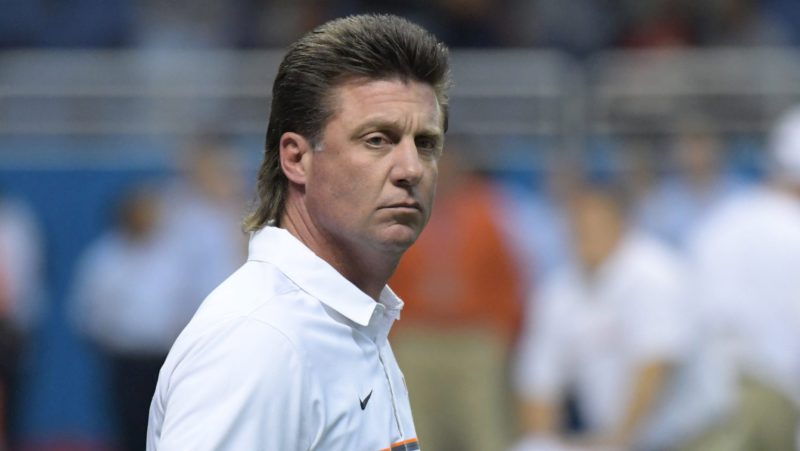 Mike Gundy has his own way of doing things. That’s been the case throughout his tenure at Oklahoma State. But that doesn’t mean that any one of those things is set in stone. Far from it, actually.

Gundy may not be an innovator but he seeks out what works. He’s not necessarily a trendsetter but he’s ahead of the curve. He may not be radical, but he’s not afraid to change. He does all of these things smartly, with an end goal in mind.

So when the 12-year head coach decided to take a practice already in use with his players and apply it to his coaching staff for the first time, he was not above a little self-admonishment wondering why he hadn’t thought of it sooner.

Coaching Search published a terrific article recently about Gundy’s recent speech at the AFCA convention last month in which he explained to coaches in attendance about how his coaches now give mandatory biographical speeches to the team. He started doing this with his players a few years ago, too (which didn’t get a ton of publicity).

He explained why he makes his coaches do this.

“This is the first year [in 2016], in preseason camp Thursdays, I had our staff get up and give a 7- or 8-minute talk about themselves. Who they were, how they got here, what they believe in,” Gundy said. “Here’s what’s really sad: 10 out of 12 guys that spoke, I didn’t know any of the stuff they were talking about. I didn’t really know myself. I didn’t know how they got to that point. I gained valuable information on our staff that I didn’t even know as the head coach.

“I’m sitting there thinking, ‘That’s not very smart. You’re supposed be in charge, you’re supposed to know these things, and you don’t even know the background of these guys.’ That was huge for us as a team. You can tell when people are paying attention, when your team is focused. You’ve got some guys looking at the wall or whatever. But they were tuned in to hearing their coaches talk about how they got to that point. That created some continuity with us.”

He went on to talk about how many of his decisions are made in light of trying to get everyone on the same page for an entire season. It’s not as easy as it seems. Especially with all the distractions in today’s society.

There was a time not long ago when turnover among Gundy’s staff was an ordinary occurrence. In a five-year stretch (from 2009 to 2013), the Cowboys had four offensive coordinators. Even current OC Mike Yurcich’s name was connected to the vacancy at Auburn last month.

Gundy, who spent time on staff at Maryland, Baylor and two separate stints at Oklahoma State, encouraged any young assistant coaches listening to make an effort to be loyal to their head coaches.

Despite (or maybe in addition to) the mullet, Gundy holds a lot of respect nationally — especially among coaching circles. Look no further than his accomplishments over the past 13 years. He explained how he encourages his assistants to get ahead.

“If you want to make it to the top, if you’re loyal to your head coach and he can trust you and you always do more than you’re asked, you’ll go right to the top,” said Gundy at the event.

“Most people are too lazy to do that. My own boys at home, I tell them, if you’re supposed to do eight reps on the bench, then you need to do nine. That means you do more than everybody else. You’re asked to do eight, do nine, because you did two more — because most kids are going to do seven. They’re not even going to do eight.”

This all may sound a bit self-serving. There’s little doubt those on his staff heard the speech. But this was more than just a plea for less turnover among the ranks in Stillwater. Gundy is smart in ways you don’t really expect.

Forcing his players and coaches to be vulnerable in front of one another and then asking for their loyalty in return is another in a long line of them.