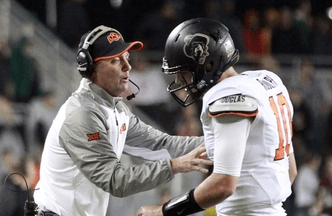 Mike Gundy was asked again on Monday during the Big 12 press conference whether Mason Rudolph would be the starting QB on Saturday and he continued to give the same absurd answer:

Gundy says Daxx Garman has been cleared, but the decision on a starter will be made at game time

He also said that Rudolph and Garman are splitting reps in practice which seems asinine:

.@CoachGundy says Daxx Garman has been released and is practicing. QBs are splitting reps. #okstate

What is the point of this silliness? Even Daxx’s parents know who’s going to be starting Saturday. Let it go, Mike, let it go!

Also, if Daxx was just now released, what was this all about?