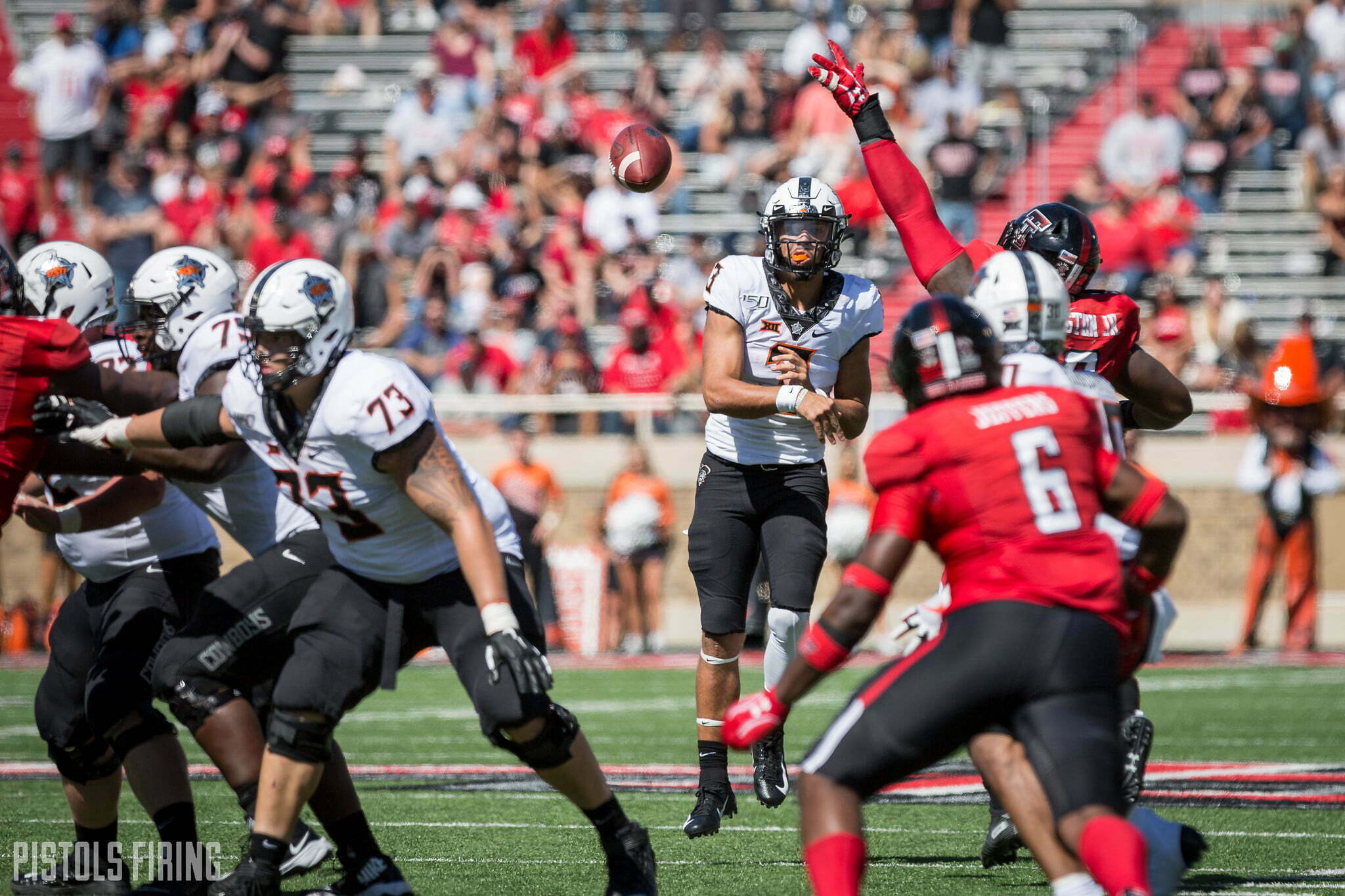 The replies to that headline, I’m sure, will be snark city, but Gundy really did address QB1 this week and where he wants to see improvement over the last six games.

“He needs to take care of the football in the pocket, that will solve half of his problems,” said Gundy. “We’re going to coach that and drill that. We have a plan in place to correct that mistake. Essentially, you don’t give yourself a chance at all when you turn the ball over in the pocket.”

It’s unclear here whether he’s talking about throwing the ball or running with it like a loaf of ciabatta bread (shout out to the tortillas of Texas Tech), but either one applies. The running and fumbling part is probably more infuriating though.

Then it becomes clear later on that Gundy is talking about throws, especially ones from a clean pocket. Ones like this that didn’t get intercepted but could have.

“Those mechanics need to be improved and we have a plan in place for that as well,” added Gundy. “Can we do that in two weeks? I don’t know. But I feel like a month from now, it will be a lot better. That’ll be a big help in that area.

“If you look at what happened, one ball got tipped and then intercepted. The other one got hit when he threw it. Now, I’m not trying to justify anything he did or we did offensively, but my job is to look at everything from a reasonable bipartisan point of view and make good decisions on it. Whether it’s true or not, I don’t know, it is what I do. So, he needs to learn to take care of the ball in the pocket and the rest of it will get better through the experience.”

Not sure Gundy knows what bipartisan means, but go on.

“You just tell him the truth,” he said when asked about how to handle this. “This is where it is, this is what happened and this is where you fix the issue. This is the plan we have in place and we’re going to start it right now. Hopefully we will improve considerably and faster than normal. It takes time to clean things up. We always just tell him the truth and where it is at.”

Where it is at is that Sanders is currently ranked fifth in QBR in the Big 12, which feels about right (although Alan Bowman is last and seems like he’s probably better than Sanders at this point). Whether he goes down or up from there and ends the season as a top three QB with Hurts and Ehlinger or a bottom three QB with Carter Stanley and Austin Kendall (😬) will go a long way in determining how OSU finishes the season.

“I always use the term ‘things don’t fix themselves.’ So we have a plan for improvement in all those areas and he’ll buy in,” said Gundy. “Sanders is a very prideful, emotional young man. He wants to do good every single play and what he has to learn is that quarterback is not that way. He needs to watch [other quarterbacks] and see how it happens and say ‘You know what? I’m going to get better. But I can’t make a play every single game, it’s just not the way the game is played.’ He’ll learn that, it just takes experience.”