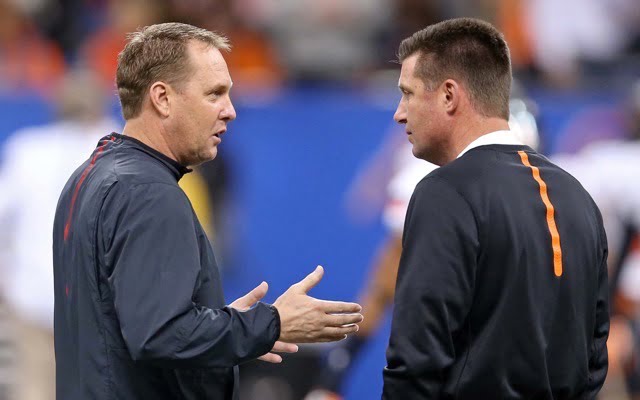 It seems as if the one person who’s not concerned with recruiting rankings and what’s going on with OSU’s 2016 (and beyond) class is the only person who can actually affect it.

Mike Gundy told the Tulsa World recently that he doesn’t care at all about crootin’ numbers and stars.

Referring to recruiting rankings and the stars attached to prospects, the OSU coach said, “We just don’t pay attention to it. I certainly don’t care. We’ve had a million two-stars who played in the NFL. Not a million, but a bunch of them — two- and three-star (prospects).”

A million? Here’s a list of every OSU player currently on an NFL roster. Of the 12 Gundy actually recruited (i.e. not Brandon Weeden and Tyler Patmon), three were 4-stars, one is a kicker, one played before stars existed and seven were 2-stars or 3-stars. So a million = seven.

Consider this chart from Matt Hinton’s excellent piece on how much recruiting matters which I have now linked to three times. This is the record of 5-star programs (Alabama, Florida, LSU etc.) against other 4-star and 3-star programs from 2010 to 2013 (OSU is considered a 3-star program for the sake of this exercise).

The exceptions prove the rule: Overwhelmingly, setting aside every other conceivable factor that determines success and failure – injuries, academics, even coaching – individual players and teams tend to perform within the very narrow range their initial recruiting rankings suggest.

While it’s true that Gundy has massively overshot expectations based strictly on recruiting, that doesn’t last forever. Not when Baylor and TCU are netting top 10 classes and OU is looming. You can’t keep moving forward with the kind of classes OSU is getting.[1. The alternative is that maybe this is our ceiling … ?] The call for Gundy to push this thing forward will get louder over the next half decade. He said it himself last year. “We have created this monster. Now we have to feed it.” The monster is currently starving as Oklahoma State hovers around 50th in recruiting rankings with powerhouses like UAB and Vanderbilt. Sure, Justice Hill or Tyrell Alexander might end up being home runs and making it to the NFL. But like Hinton said, the odds are stacked not in our favor. Are we worried about this? Because Mike Gundy doesn’t sound like he is.