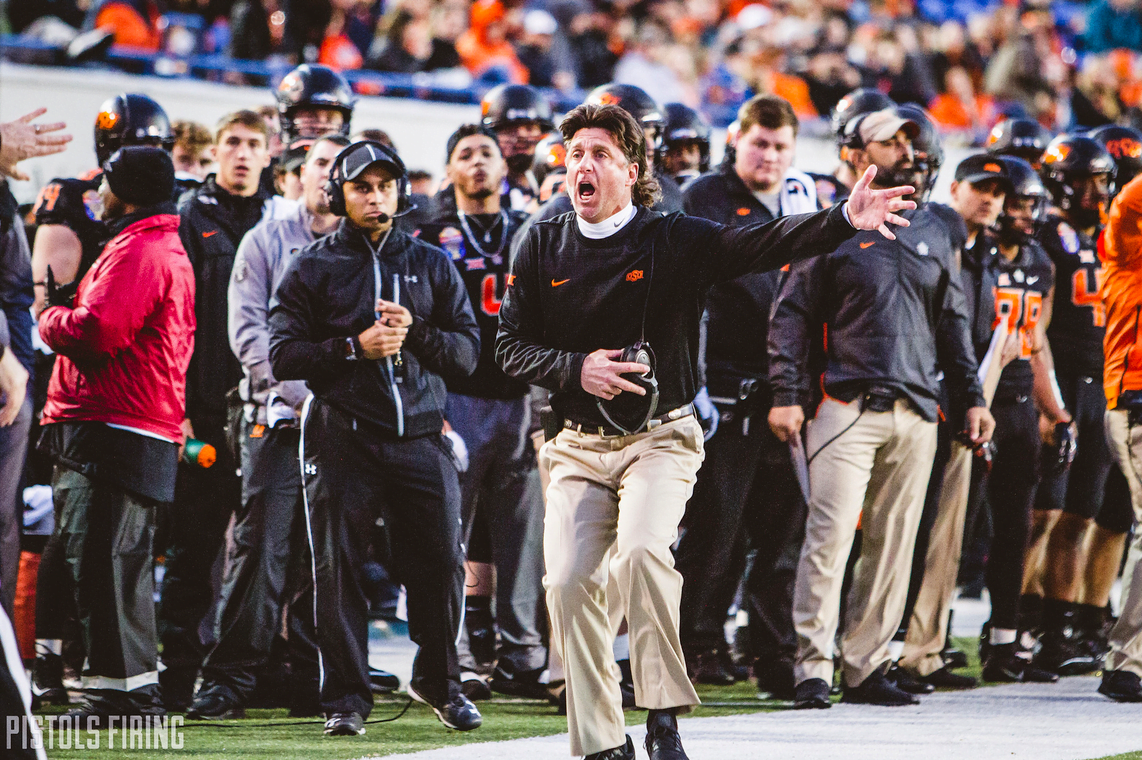 Mike Gundy received a one-year contract extension, it was proudly announced Wednesday by Oklahoma State. This validates what many around OSU know but few remember from his new and uniquely structured contract he inked in 2017: He’ll be the head coach at OSU until he decides he doesn’t want to be.

The granular details of his contract I will spare you, but in layman’s terms, Gundy signed a five-year deal in the summer of 2017 that began at a $4.2 million annual pay rate and provides for annual automatic rollovers, $125,000 annual escalators and a salary increase that reaches its peak in 2021 at $4.7 million.

That deal was bumped to $5 million after the Tennessee saga last December, and the same escalators were kept in place. The deal auto-renews to the length of five years annually unless the university provides written notice before the automatic rollover date stating it does not intend to renew him.

Even more straightforward is the message OSU is sending by announcing his extension, following a tumultuous 7-6 season in which Oklahoma State vastly underachieved: They’re riding with Gundy no matter the in-season results until he hops off the saddle.

For a program that has won bigger than ever under the leadership of Gundy, it’s a decision that, big picture, is a no-brainer. Before a 6-win 2018 regular season, OSU had three-peated 10-win seasons and notched that mark four times in a span of five years. The level in which the Cowboys have consistently been good, considering OSU’s unremarkable history overall, is actually quite remarkable.

But there’s also a precedent that’s being set here, one that says no matter if OSU goes 7-6 or 10-3 or 15-0, OSU is going to keep him around and keep forking over top-10 money, regardless of whether he wins at a top-10 level.

Now if Gundy goes 3-9 or 4-8, the story may be different, but the odds of that seem high enough that it’s not really worth considering. We are operating as if OSU’s floor is a five- or six-win season. OSU has punched its ticket to 13 consecutive bowl appearances under Gundy in one of the most successful runs — heck, the most successful run — in program history. It would take a Sam Hinkie-like tank job for Gundy to get ousted. He’d almost have to try to get fired. Or maybe he’ll just quit. Here’s what he told Bill Haisten of the Tulsa World recently.

“Eventually, I’ll check it in,” Gundy said. “I still have kids in the (Stillwater) school system here. Plus, I’m pretty high-energy. I’d be bored to death. (But) these are different times, you know.

“There are parts of what (head coaches) do that aren’t fun. If it ever gets to the point where one outweighs the other … (and) if I ever start to feel that way, I’ll just walk over to (athletic director Mike Holder) and say, ‘I don’t want this anymore. Let me sign out of my contract. I’m done.’ I’ll probably tell him before I tell anybody.”

Gundy’s contract as it is currently written is a win for OSU. It can keep him at arms length from flirting with Tennessee, Baylor or other openings without leveraging his way to another raise. It also cuts both ways — the contract, ironically, can also pay for mediocrity, too. This is the first example of that, and given Gundy’s projected longevity, it may not be the last.

OSU is handcuffed to Gundy until he pulls out his $5 million key and decides he wants to tend to his cattle and hunt snakes full-time.

That is not a bad thing, by any stretch. A knee-jerk reaction — which I’m sure you can find somewhere online — is that Gundy doesn’t deserve a raise. I’m not here to preach that to you. I’m around the program 1 percent as much as Mike Holder and decision-makers who put their name to this agreement. I’m merely here to lay out the cold, hard, undeniable truth.