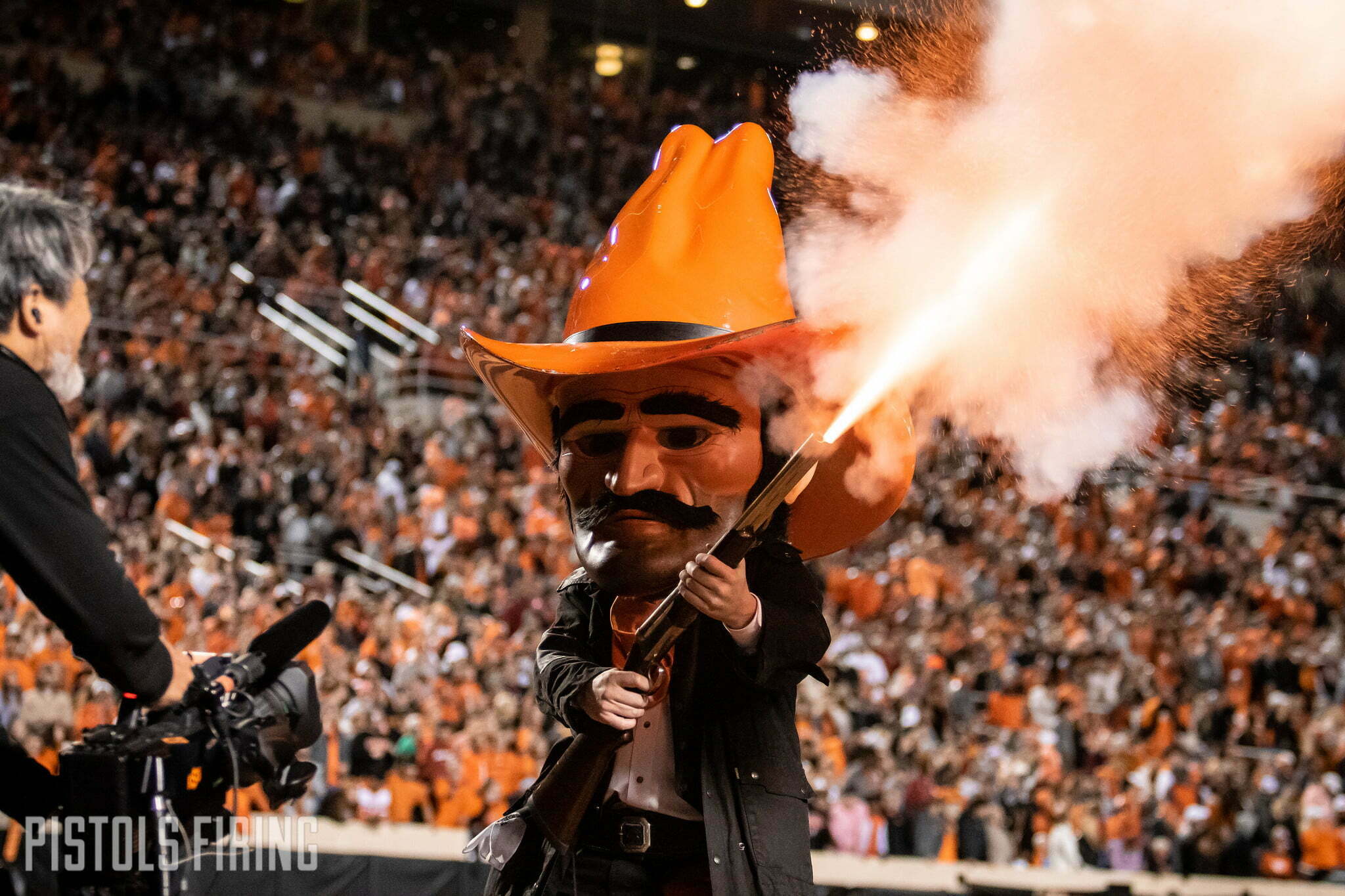 STILLWATER — The Cowboys are officially adding a solid 2022 class Wednesday.

It’s National Signing Day where prospects from all around the country will sign their letters of intent. Entering the day, OSU’s class ranks in the Top 25 nationally with a few surprises sure to come.

As the future Pokes’ letters roll in, this post will be updated with information and film on each prospect. Mike Gundy meets with reporters at 9:30 Wednesday morning to discuss the class. PFB will be on-hand, so look out for more content from that to come throughout the day.

The rankings next to each prospects star rating is their national rank, their position rank and their state rank, per 247Sports composite system.

Cox on Brown: The hometown hero is reminiscent of a certain outgoing Cowboy playmaker. The All-Conference Linebacker of the Year called Malcolm Rodriguez his favorite player, and he’s made similar plays for Stillwater High. While Rodriguez had to bulk up to move from safety to linebacker, Brown boasts two inches and 20 pounds on his hero coming in. Time will tell whether he can see the field, and make the impact, as quickly.

Scott on Benson: Xavier Benson already has some Big 12 experience after starting 10 games at Texas Tech during the 2019 where he had 57 total tackles. He then went the junior college route at Tyler Junior College. He had 115 total tackles at Tyler this past season. He enters a linebacker room that is set to lose starters Malcolm Rodriguez and Devin Harper to graduation. Benson has two seasons of eligibility remaining.

Scott on Epps: A big-bodied corner, Epps also showed out at quarterback and wide receiver for Chaminade College Prep in St. Louis during his senior season, finishing the year with 36 total touchdowns and 1,852 rushing yards. There is a ton OSU corners coach Tim Duffie and safeties coach Dan Hammerschmidt can do with Epps’ 6-foot-3 frame, and that’s not to mention the athletic ability he has paired with the frame.

Cox on Gilkey: Kasey Dunn may have signed his next diamond-in-the-rough receiver. Gilkey comes in at a rangy 6-4, but he’s a fluid athlete who routinely outran the competition in high school (one reason he was used to return kicks). He racked up more than 2,500 yards and 45 touchdowns over the past two seasons. The former AAU hoopster is not afraid of a little contact, but will need to continue to develop and build out his frame. His ceiling is that of a Marcell Ateman-type outside and red-zone threat.

Other offers: Iowa State, Kansas State, Iowa and others

Cox on Dean: Dean has lined up at both tackle and tight end, but he shines as a defensive lineman which is where the Cowboys are planning on using him. He’s adept at getting into the backfield but has shown the ability to close in space well for his size. Dean adds talent and athleticism to an already talented and athletic pool of Cowboy D-linemen.

Cox on Rangel: I’m excited to see what Tim Rattay can do with him. Rangel was an incredibly accurate and efficient passer for Lone Star High and did a great job of taking care of the football. He’s elite in neither arm strength or athleticism, but I think he’s pretty good on the former and better than advertised at the latter.

Other offers: Kansas State, Utah State, Texas State and others

Scott on Shettron: An adopted brother of fellow OSU signee Talyn Shettron, Tabry caught nine touchdown passes as a senior at Edmond Santa Fe this past season. He had 31 receptions and 378 yards to go with it. OSU’s Cowboy back position has seen former walk-ons, converted defenders and even a converted quarterback man it over the past few seasons. Shettron will be just the second Cowboy back on OSU’s roster who OSU offered a scholarship to out of high school to be a Cowboy back, joining Quinton Stewart.

Scott on Shettron: Shettron’s 0.9619 composite ranking makes him the sixth highest ranked commit in OSU’s history and the No. 2 receiver behind only Dez Bryant. Shettron is a jump ball threat and has been a nightmare for Oklahoma high school corners. Shettron caught 136 passes for 2,201 yards and 25 touchdowns the past two seasons. He originally committed to Oklahoma last year before flipping his commitment to the Cowboys in June. Shettron will enroll in January.

Scott on Johnson: Johnson impressed at an OSU camp this summer and walked away with an offer. Not too long after that, he was a Cowboy commit. Johnson is athletic and has a frame that could see him play in a variety of spots at the college level. As a senior at Putnam City North, he had 64 tackles, 12 tackles for loss, nine sacks, two forced fumbles and a fumble recovery.

Scott on Harvey: There aren’t many high schoolers walking around at 6-foot-8, 330 pounds, but the Cowboys just signed one. Harvey suffered a knee injury early in his senior season at Ridge Point High School that kept him out the remainder of the season. He committed to Louisiana Tech this summer but rescinded that commitment when the Cowboys came calling. His size alone should make him an intriguing prospect to watch over the coming years.

Other offers: USC, Miami, Penn State, Auburn, Baylor and others

Cox on Kawecki: His offer sheet doesn’t quite jive with his star rating. Kawecki is probably a year or two away from contributing on the field at the next level, but you can tell why he has over a dozen Power Five offers. He’s an energetic blocker who goes after would-be tacklers. If he wins his battle, he ends up on top of his foe.

Scott on McKinney: A corner with superb ball skills, McKinney picked off five passes in his senior season, returning two for touchdowns. He had nine total interceptions in his sophomore, junior and senior seasons. McKinney made official visits to OSU, Arizona and Missouri this summer before committing to be a Cowboy on July 4.

Cox on Brown: Brown has the skills and physical traits to compete for reps earlier than most at his position. He’s fast and physical. When he finds a crease, Brown shows off his speed getting to open field and beyond. And when he finds defenders, he’s shown the ability to break tackles. He’s one of my favorite pickups from this class.

Other offers: Oklahoma, Michigan, Oregon, Arizona State and others

Scott on Brown: A late addition to the Cowboys’ class, Brown is a four-star edge rusher according to Rivals, and depending on which recruiting service you look at, he is somewhere between 230 pounds and 255 pounds. As a junior at Choctaw High School in 2020, Brown had 30.5 tackles for loss and 15 sacks. Brown joins an in-state lineage of Trace Ford and Collin Oliver of four-star, in-state pass rushers to join the Pokes in recent years. It turned out well for the first two.

Scott on Presley: Younger brother of OSU receiver Brennan Presley, Braylin might be the most electric high school football player the state of Oklahoma has seen in a long time. Braylin’s Bixby Spartans captured a fourth consecutive state championship this year, and Presley accounted for 267 yards and four touchdowns in the title game. Bixby has won 49 straight games, an Oklahoma high school record in 11-man football. Presley can make you miss in an elevator. He ran for 1,105 yards and 17 touchdowns on only 109 carries this year. That’s more than a first down a carry.

Other offers: Texas A&M, Auburn, Baylor, Houston and others

Cox on Webber: He’s not the most flashy prospect but, of all the signees putting pen to paper on Wednesday, Webber is the probably most ready to contribute from Day 1. The No. 2-rated junior college prospect is a strong, physical blocker who swallows up would-be tacklers.

Scott on Gordon: Gordon is a do-it-all back to the point that he played quarterback for Trinity High School this past season. He showed in 7-on-7 camps this summer that he is also no slouch at receiver. During the past two seasons Gordon has rushed for a combined 4,561 yards and 63 touchdowns. That’s not to mention that he threw for another 308 yards and three scores and caught 15 passes for 344 yards and four scores. He has been uber-productive while playing at a high level of high school football. It’s a wonder how some of the surrounding blue-blood programs passed on him.