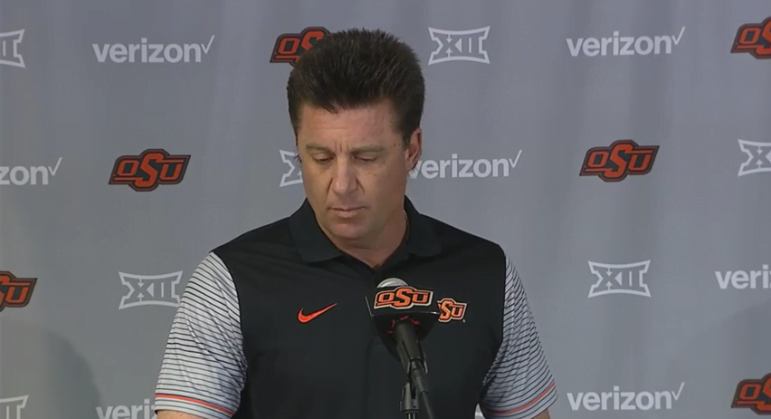 National signing day a year ago was anything but quiet. Oklahoma State made major moves in the final hour by picking up four-star linebacker and in-state recruit Calvin Bundage, as well as Louisiana quarterback Keondre Wudtee on signing day.

This cycle, however, there wasn’t much action at all. Every committed player signed as expected, with no dramatic ceremonies for fans to hold their breath for. But it doesn’t mean there won’t be drama … it just might be delayed. There’s still one spot left in the class, Mike Gundy said earlier today.

A position to keep an eye on is along the offensive line. Multiple offensive line prospects de-committed late in the process from OSU, which left OSU in a tough spot.

“We were going to take four [offensive lineman],” Gundy said in his press conference on Wednesday. “We had a couple committed for a long time but we lost them. It’s extremely difficult to make up ground in the third week in December at that position, especially on a four-year player.

“Sometimes you can grab one on a two-year player. That was the most difficult aspect of this class. But we’ve faced that before here … we have to find guys who can fill that role in the short term for maybe a year or two and fit them in.”

Oklahoma State has filled several positions through different ways after losing high school recruits Dan Moore, Derek Kerstetter and Adrian Wolford to Texas programs — two de-commitments came with less than three months until signing day. One way was by going the junior college route in adding two-year player Arlington Hambright, a left tackle from Garden City C.C. Somebody Gundy said they “need to try to be an impact player for us.”

They also went off the board in securing a transfer, Tyler Moore, from the Minnesota program. He will sit the next season, and have several years of eligibility left to likely take over at center. That means two of the offensive line positions are filled. Like Gundy mentioned, making up ground on a four-year player (of Division I caliber) at this stage in the game is next to impossible. Most recruits have been uncovered by this point, and it puts OSU in a position to likely seek out two-year players such as a junior college or transfer player.

Right now, that final spot could belong to Larry Joubert. Although right now he doesn’t hold an offer, he fits the bill of a prospect who can be a two-year player with decent size at 6-foot-4 and 270 pounds, and having been at the junior college level is more primed to contribute than a four-year player.

The bottom line is that while signing day drama is likely avoided, there could be drama down the road. OSU can hang on to that scholarship spot for as long as it chooses, and won’t have to spend it right away. My guess is that the position gets filled in the next month or so, as junior college prospects emerge and options thin out. Ideally, a two-year player could be on campus after the semester and *hopefully* prepare to get in game shape to maybe challenge for a spot in the fall.

Although the scholarship could technically go to any position, my bet is that it ends up in the hands of an offensive lineman. And the suspense may be drawn out for awhile.