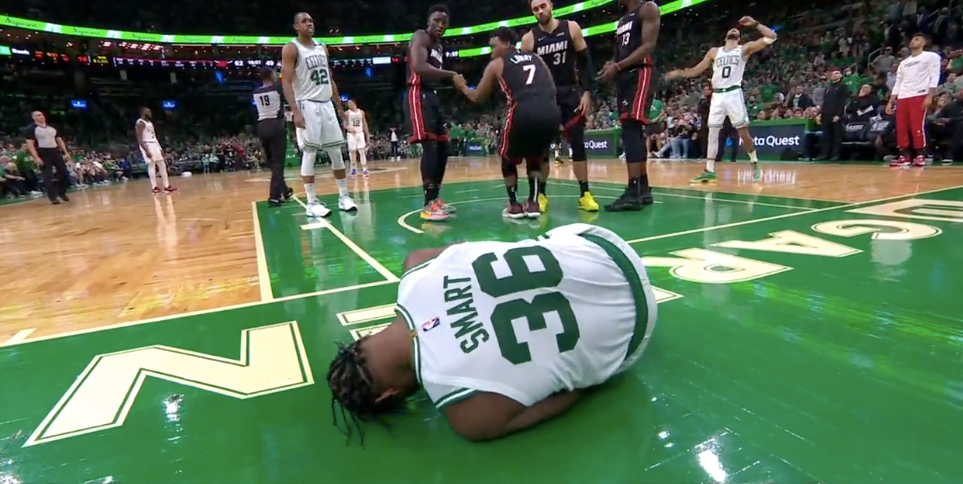 Former Cowboy Marcus Smart won NBA Defensive Player of the Year honors earlier this month and has enjoyed a career year with the Boston Celtics, who selected him in 2014 with the sixth overall pick.

That continued on Saturday.

Smart did something pretty much only Smart would do, as he went down with an apparent lower body injury and hobbled off — with assistance — back to the locker room with what seemed to be a debilitating injury.

Only it wasn’t. Smart arrived back on the court moments later to help finish the game for Boston. From there Boston outscored the Miami Heat (in an eventual loss), but Smart was instrumental in the comeback, finishing with 16 points and a team-high seven assists.

“He obviously came back and played well,” said Celtics coach Ime Udoka postgame. “Looked like he rolled an ankle and Jayson got a stinger but they both were able to continue and finish the game. I’m assuming they’ll be okay.”

Of course, Smart’s got a bit of a history of exaggerating calls, so when he injured himself it wasn’t clear exactly how injured he was. But it looked pretty bad. So when he came back out, Twitter had quite a bit of fun celebrating his grit.

Unfortunately for Boston, not even Smart’s return could help them Saturday, as they fell behind 2-1 in the Eastern Conference Finals. Game 4 in Boston is scheduled for Monday at 7:30 p.m.