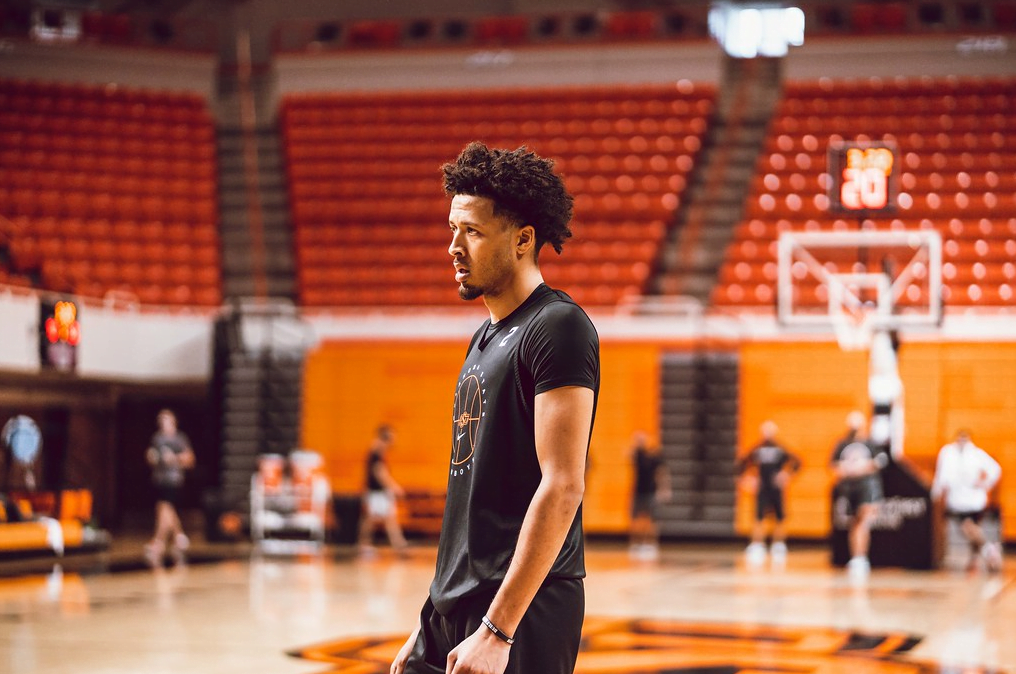 Oklahoma State has three former Cowboys in the league, and all three made plays this week. Let’s get an update from Cade Cunningham, Marcus Smart and Cameron McGriff.

One former Cowboy entered COVID protocols and another returned from them.

Cunningham missed two and a half weeks of action after entering COVID protocols, and his Pistons went 1-3 in his absence. But Cade returned to action on Monday night and did so in a big way, helping lead his Pistons to a 115-106 upset of the Bucks in Milwaukee.

There wasn’t much rust to shake off for the No. 1 pick. He went 8-for-15 from the field for 19 points, dished out seven assists, grabbed three boards and had this block.

Cade was a game-leading +13 in the box score plus/minus and then added this cherry on top, a game-icing trey over Giannis Antetokounmpo.

In 26 games, Cunningham is averaging 15.4 points, 6.2 rebounds and 5.3 assists, ranking in the Top 5 among rookies in all three categories as of this typing.

The former OSU lottery pick helped his Celtics pick up an overtime win in Orlando on Sunday night.

In addition to a 50-burger by Jaylen Brown, Smart chipped in 17 points, seven rebounds, seven assists and two steals. Here’s one of those steals that helped Boston protect a late lead in regulation.

And the he affected the game again with this stop to keep it tied. The Celtics would pull out a 116-112 win in OT.

Cam Debuts, Then Hits the Protocol

The former Cowboy finally got his shot in the league, produced and then hit his own hurdle. McGriff debuted for the Trailblazers as they hosted the Dallas Mavericks on Dec. 27. He finished with three points, an assist and two boards.

Here is McGriff’s first NBA board and bucket.

McGriff saw significant floor time in the Blazers’ next two games, including a seven-point, five-rebound effort against the Lakers on New Year’s Eve. Unfortunately, McGriff entered COVID protocols on Jan. 2. The NBA recently shorted its COVID protocols, but McGriff’s deal with Portland was a 10-day hardship. So, his NBA future remains uncertain, but his former coach doesn’t think that’ll be McGriff’s last shot at the big time.

“Got chance to talk to him and his mom, and obviously he’s really excited,” OSU coach Mike Boynton said. “Proud for him, and I don’t think it’ll be his last opportunity. He’ll have another one. I think he did well.”