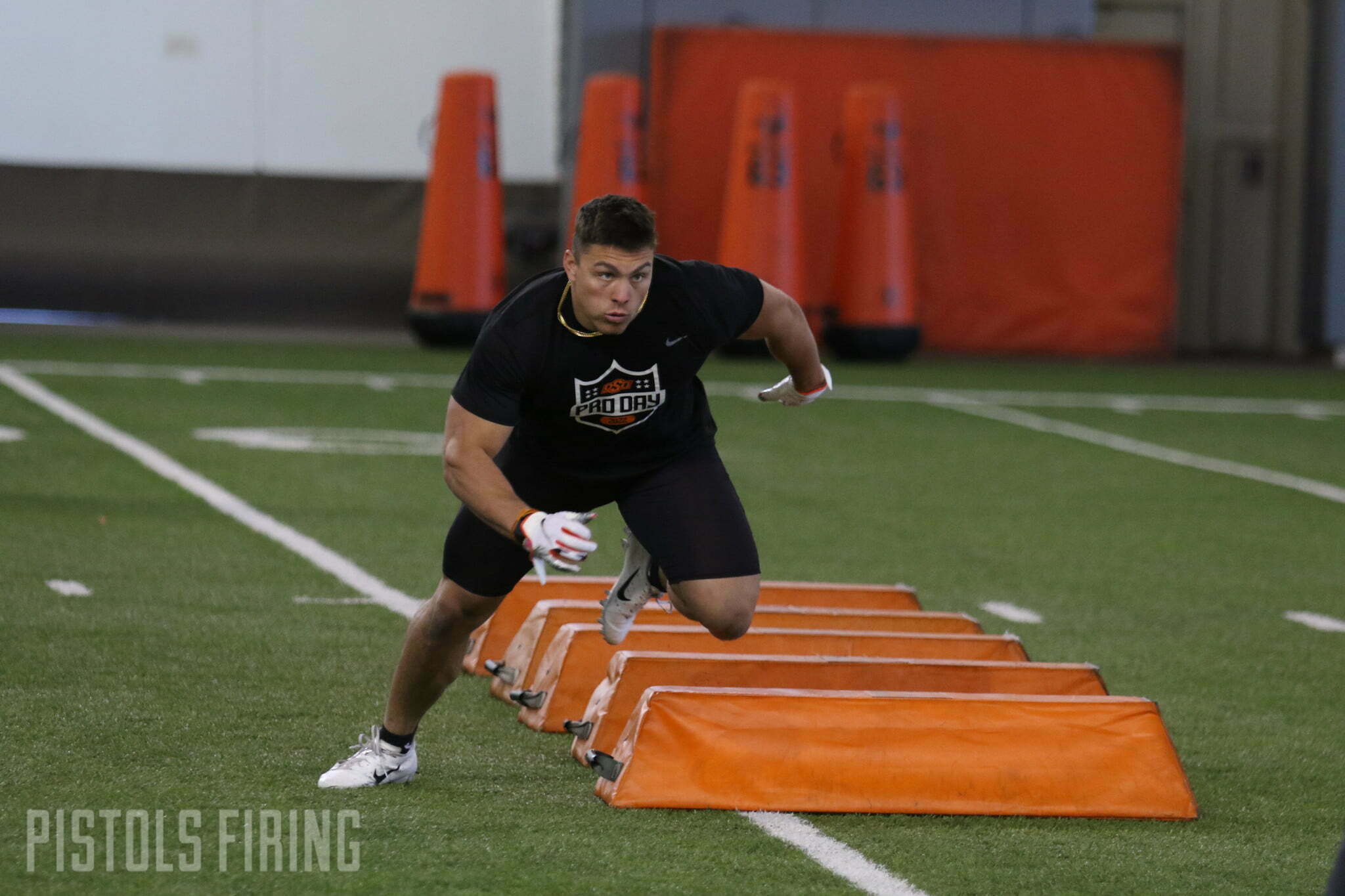 This year’s NFL Draft is less than two weeks away, and there are a handful of former Cowboys who could hear their names called from that podium in the desert. Let’s see where prognosticators and talking heads see them going.

We’ll run through a list of mock drafts that I trudged up from the depths of the internet, but first let’s go over the details for next weekend.

When: Aprils 28-30 (Round 1 kicks off at 7 p.m. CT on Thursday)
Where: Allegiant Stadium in Paradise, Nevada (home of the Las Vegas Raiders)
Watch: ABC, ESPN, ESPN app

Now let’s see where the Pokes are predicted to be go.

A four-year starter with over 3,000 snaps under his belt, Rodriguez can be a valuable player for an NFL team. He started his career at safety before switching to linebacker where he’s really excelled, but he also is a multi-phase special teamer and was voted a team captain in each of the past two years. He plays angry, sheds blocks like a professional and takes great angles in pursuit. In 2021, he played 430 snaps in coverage and didn’t allow a single touchdown per PFF. The only real knock to his game is that he’s slightly undersized at 5-11 and 225 pounds.

Although he’s a little undersized (5’11”, 232), the former Oklahoma State Cowboys LB is an intriguing prospect who could help the Cowboys defense. From an athleticism standpoint he checks all the boxes and strength isn’t a concern either after putting up 36 reps of 225 pounds on bench press at his Pro Day. Can’t ask much more from a Day 3 draft pick.

The Athletic (by Dane Brugler)

Malcolm Rodriguez would be another ‘tweener for the Giants in this mock draft, but that also means a guy you can lineup at linebacker and drop into coverage, or lineup in the secondary and send after the quarterback.

Don’t rule out the Green Bay Packers finding a way to bring back De’Vondre Campbell if given the chance. While it may sever other deals from happening, it could be worth it while the Packers look elsewhere in the 2022 NFL Draft. Malcolm Rodriguez is an instinctive player with a great motor and improving coverage skills.

Kolby Harvel-Peel has the size, range, and ball skills to thrive in single high and deep half coverage, where he can use his eyes and range to close ground and force turnovers.

Getting another rangy safety makes sense, and they get one in Kolby Harvel-Peel. Another big DB with good length, Harvel-Peel plays with impressive range on the back end when he plays in single high. He disrupts things at the catch point, tracks the ball well, and has good ball skills to create turnovers.

If the Bears can get Kolby Harvell-Peel at 184th, he will be the steal of the draft. He’s a big hitter who enjoys separating the ball carrier from the football. But he’s much better at zone coverage than man and at this point shouldn’t be asked to cover smaller, quicker wide receivers in the slot.

Atlanta Falcons | Round 6 | No. 213A heady player with good eye discipline, has capitalized in his career by being in the right place at the right time to make plays on the football. Allows his eyes to take him to the football by reading the quarterback and understanding route concepts.

Harvell-Peel may not be an elite athlete, but he has the size and tackling ability to come into the box at 6’0″, 207 pounds. He’s also flashed good ball skills in previous seasons.

Again, regardless of the free agent signings, adding young players to the secondary would be smart. Kolby Harvell-Peel was a big piece of an Oklahoma State defense that took tremendous strides over the last couple of seasons. He was tabbed as a potential starting strong safety for last year’s draft, and there are plenty of reasons to believe he can get back to that level.

While he’s under six feet, Sterling plays bigger than he looks and isn’t afraid to deliver a big hit which is something this Bears defense could use.

This pick no longer exists since this mock came out after Philly traded its sixth round pick as part of the blockbuster deal which also sent two first round picks to the New Orleans Saints. But we’ll include the Philly Voice‘s selection either way. It called Sterling “an instinctive, intelligent safety, who clearly loves to play.”

Getting competition at right guard would be a good thing for the Chargers to hopefully solidify things up front for the future and protect Justin Herbert. Josh Sills offers strong hands and good power to hold his ground in pass protection.

Tay Martin embodies the archetype role of a big-framed receiver that could grow into a consistent red-zone weapon. He shows phenomenal body control, often twisting his body mid-air to make acrobatic receptions.