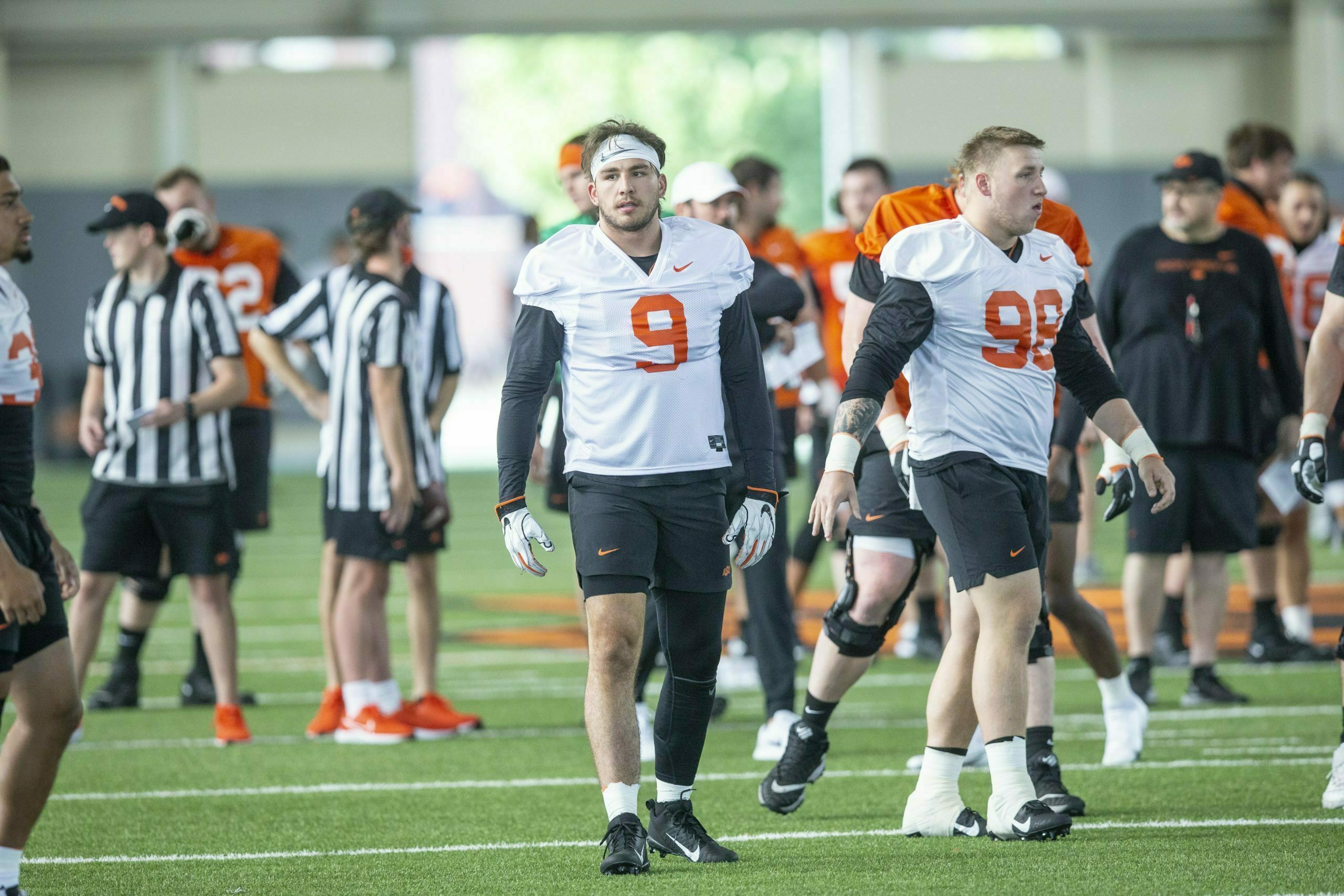 STILLWATER — This marks the last off week until the Cowboys’ 2021 season.

Oklahoma State is less than two weeks away from its Sept. 4 season-opener against Missouri State in Boone Pickens Stadium. Here are three takeaways from the Cowboys’ player availability last week.

Cowboy defensive end Brock Martin said last week that he feels as good as he has since he got to Stillwater in 2017.

Martin has played in 28 games in his OSU career where he has 62 tackles, 12.5 tackles for loss, 2.5 sacks, four fumble recoveries and even a touchdown. But entering his redshirt senior season, Martin said he is eating right, drinking more water and making sure he gets his sleep.

“Having her and my son, it’s really given me a why,” Martin said. “I’ve never really had a why. I’ve always said my family or this and that or I want to go to the NFL. They’re whys, but it’s not like a reason to come out here and go to work every day. I can just feel the way I took care of things after he came along or when he started to come along, when she was pregnant. I just kind of locked everything in. He’s my why, and he always will be from here on out with her. He’s what I needed.”

One of the few position battles taking place for OSU this fall is at the corner spot opposite Jarrick Bernard-Converse.

The battle is among Christian Holmes, Korie Black and Jabbar Muhammad, but at his media availability last Thursday, OSU coach Mike Gundy said Holmes and Bernard-Converse were getting “65%” of the snaps with the starters.

Holmes played in 24 games at Missouri from 2016-19 where he had 66 tackles and two interceptions, one of which he housed for a touchdown. In his first season at OSU last year, Holmes was the Cowboys’ third corner behind Bernard-Converse and New York Giant Rodarius Williams. Holmes had 24 tackles on the year and five pass breakups.

A redshirt senior in his sixth year of college football, Holmes said he recognizes the depth of the Cowboys corner room entering 2021.

“I feel like they’re coming along good,” Holmes said. ” I feel like we have a room where a lot of young guys can fly around and play. You got guys like Korie Black and Jabbar who came a long way from a mature level and are mentally ready to come on the field this year. You got guys like Demarco Jones who’s making a push over the hump, and even Jordan Reagan who is also making a push over the hump. It’s going to be an exciting room for the corner backs this year.”

In the matter of a few weeks last year, Jake Springfield went from a redshirt freshman walk-on to the Cowboys’ starting left tackle.

Springfield and the rest of the Cowboys’ young, banged-up offense line took their lumps in 2020 but return for the 2021 season after gaining experience and another offseason in the weight room.

Springfield is projected to start at right tackle for the Cowboys’ in his redshirt sophomore season. His 703 snaps last season were fourth-most among Cowboy offensive linemen, and his nine starts were the most of any freshman on OSU’s roster last season.

Springfield said he has been talking with former Cowboy offensive lineman Teven Jenkins, who went in the second round of this summer’s NFL Draft to the Chicago Bears. Jenkins is dating Springfield’s sister, former OSU softball standout Sydney Springfield.

“I have more confidence going into this fall,” Jake Springfield said. “I knew that coming in I had a lot more time for me to prepare myself mentally. Now I have more feel for the playbook, and now I have a good feel of what I can do and how I can contribute.”