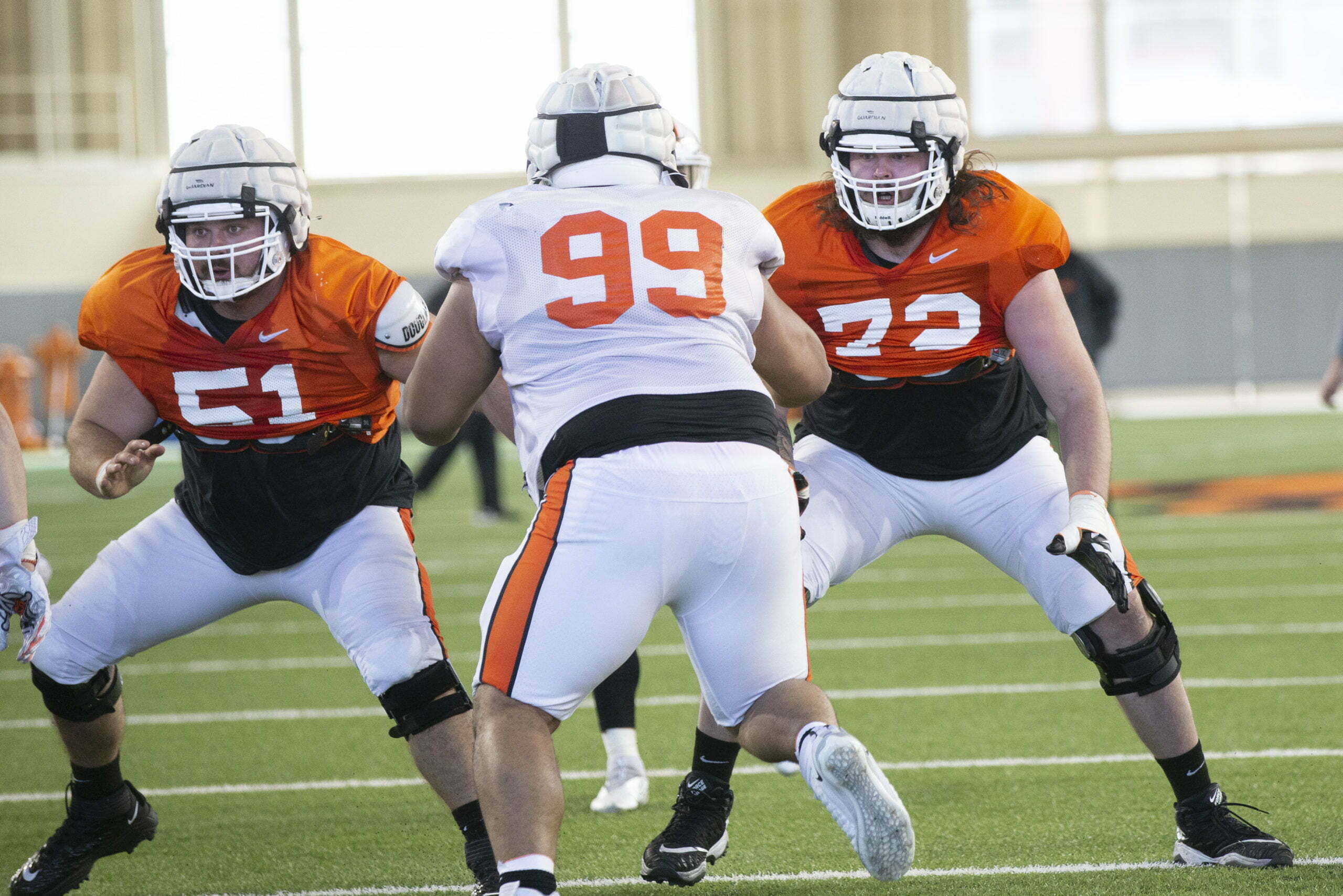 The Cowboys’ spring practices are rolling along after a shortened camp last year.

Josh Sills, Tre Sterling and Logan Carter met with reporters following Tuesday’s practice. Here are some of the points they hit on.

OSU’s offense will have a fair bit of youth up front this season, but at center, the Cowboys will have about as much experience as possible in Miami (Ohio) transfer Danny Godlevske.

In the past five seasons, Godlevske started 40 games for the RedHawks. He will have to adjust playing at the Big 12 level, but Josh Sills said Godlevske has already done well in picking up Mike Gundy’s offense.

“Danny coming in has really helped,” Sills said. “He’s super smart. He has picked up the offense really quick. Just his football instincts and football smarts, ability to read a defense is really good. He’s helped us a lot, and I think that’s really made everyone excited.”

Sills, a redshirt senior himself, said he and Godlevske attended a lot of the same camps as high schoolers. Sills said he got to know Godlevske when they both had offers to Miami (Ohio).

“He’s a hard worker,” Sills said. “Just puts his head down. If you tell him to do something, he does it. He doesn’t care how good, bad or ugly it is, he just does his job every play.”

‘The Best Secondary in the Nation’

The Cowboys got some big boosts this offseason with Kolby Harvell-Peel and Tre Sterling announcing they were coming back for this 2021 season, and Sterling isn’t shying away from the high expectations his position group has on it.

Cowboys Young and Thin at Cowboy Back

With Jelani Woods now at Virginia, the Cowboys don’t have a ton of experience at Cowboy back outside of redshirt senior Logan Carter, so this spring is big for that young group behind him.

Carter initially came to OSU as a walk-on from Henrietta, Texas, but he was since earned a scholarship. In the past two seasons, Carter has 13 receptions for 99 yards and a pair of touchdowns.

There are five other Cowboy backs on OSU’s spring roster. Braden Cassity is the only player from that group who has played in a game at Oklahoma State, and even he hasn’t caught a pass.

Along with those two, there is redshirt freshman Quinton Stewart who had his early enrollee spring cut short last year. Then there are walk-ons Brendan Mitchell, Colby Blatnik and Price Daube.

Mitchell has an interesting story, as he transferred in from Navy. At Navy he played football and ran sprints on the track team.

Junior college transfer Austin Jarrard will eventually join that group, but for now, the young unit is getting welcomed experience this spring.

“There’s not very many of us,” Carter said. “Some of the guys are younger, a lot of young guys learning, getting into it. But everybody’s working hard. That’s one thing this group does: work hard. Nobody takes plays off. Even if they don’t know what they’re doing, they’re still going full speed on every thing. A bunch of hard-working guys.”