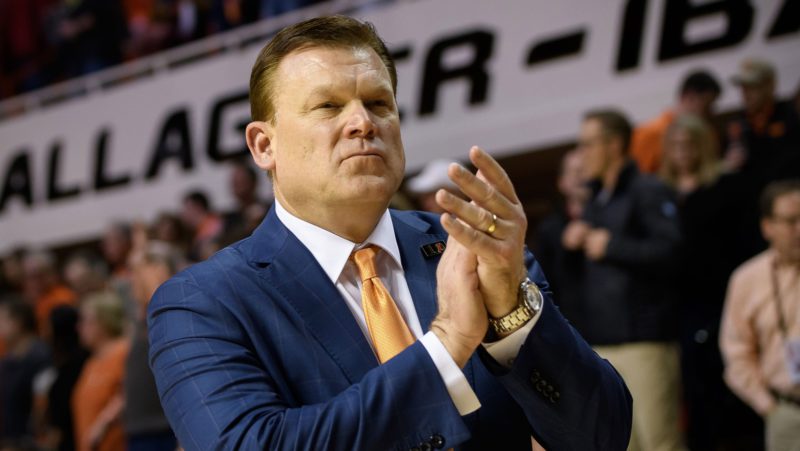 The Cowboys thumped the ‘Hogs’ in front of a rowdy Gallagher-Iba and some familiar faces with a broken record thrown in.

• Phil Forte is the most decorated 3-point shooter in Oklahoma State history. The record was for most made 3s — one which he stole from staffer and local Oklahoma legend Keiton Page. Also Page was sitting about three feet away when this happened.

The Shot! All time leading 3 pointers at OSU! pic.twitter.com/WBTGQWLIfE

• Forte had maybe his best game this season and not just because of his work from deep — of which he was 4-9. He had 18 points on 6-12 shooting, and six assists to one turnover. His role in running the offense has increased, especially against teams like Arkansas that like to press. And he’s been pretty good at it.

• Before today, the Cowboys and Razorbacks hadn’t played since December 20, 2003, when OSU beat Arkansas 73-58 in Fayetteville — Tony Allen leading the way with 22 points. You know? Back when he was more than just “first-team all-defense!”

The Cowboys have won nine of the last ten matchups dating back to 1966. The Cowboys now lead the series 37-14.

• The Cowboys entered the game ranked third (!) in adjusted offensive efficiency (122.4) behind only UCLA and Kentucky. After today’s performance they are No. 2 (123.3).

• If this current trend of holding teams to 70ish points keeps up, the remainder of the season could look a lot better than the beginning of Big 12 play. There’s a reason for this uptick in defensive efficiency. After Kansas State hung 96 on his team, Brad Underwood did what not a lot of coaches would have the courage to do. He changed up his defensive philosophy completely and it has resulted in three straight wins.

• OSU held the Razorbacks to 41 percent shooting and 28 percent from 3. This is a team that was averaging 46 percent and 38 percent when they got to Stillwater. The Cowboys would not allow Arkansas to get into any kind of rhythm allowing only seven assists to a team that averages twice that.

• The Cowboys are also No. 2 in adjusted strength of schedule behind only Tennessee. Arkansas is 74th. The Big 12 is a tough league.

• Jawun Evans had a sneaky (?) good game. I thought he was great (especially early). He pitched in 16 points on an efficient 4-8 and 1-2 from 3. He had seven rebounds and eight assists to one turnover. Plus the floater game was strong. He stayed within the offense and didn’t try to do too much. One of his best games this season.

• Davon Dillard is a legit Big 12 sixth man. The light is on. He went from being a four-star recruit to living in Travis Ford’s doghouse and even getting several DNPs care of Brad Underwood — to buying in and becoming a huge spark off the bench. #coaching

• Let’s not gloss over Jeffrey Carroll’s game. 20 points (6-15, 0-3 from 3), seven rebounds and three assists. It may have been an off shooting night (for him), but “Clip” was everywhere. You could add a “1” in front of that rebound total and it would not surprise me.

• Oklahoma State won the turnover and assist battles, as well. 12 turnovers by Arkansas to just seven assists. The seven assists were their second-fewest on the season. The Cowboys got 24 assists to 33 made buckets and only gave away seven turnovers. The 24 assists is a season high (previous high was 22 vs. New Orleans). Impressive.

• Oklahoma State not only has played a much tougher schedule, they’re a lot younger than Arkansas. The Cowboys are the 264th-most experienced team in the nation. The Hogs are 24th. Some fun basketball ahead of us for Underwood’s crew.

• OSU’s 99 points were the most the Razorbacks have given up all year. It was also their biggest margin of defeat. No. 2 in each of those categories belongs to the University of Kentucky.

• Brad Underwood gets a chance to start off his Bedlam series record the right way against another K-State alum in Norman on Monday night. OU is an even more inexperienced team than OSU (329th out of 351) and they just got embarrassed at home by Florida. Let’s go!