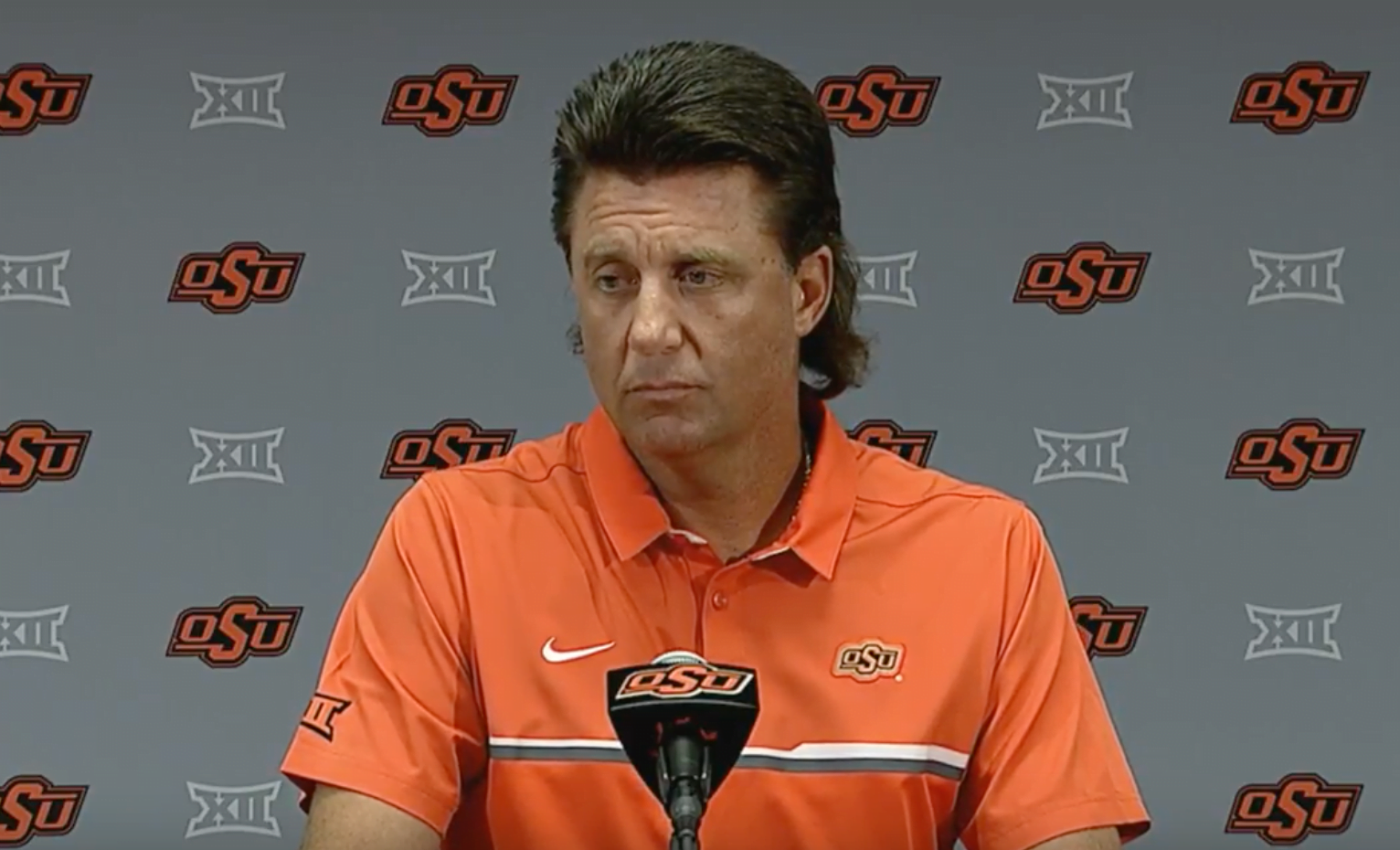 STILLWATER — Mike Gundy held court with the media for about 40 minutes on Saturday in Stillwater for OSU’s 2017 Media Day/Fan Appreciation Day. He touched on a variety of topics including Zach Sinor’s Heisman campaign, the backup RB situation and what’s next in terms of innovation for the Pokes. We were there and have a bulleted list of what Gundy talked about below.

• Gundy brought in a young kid from Fan Appreciation Day who sang “That’s why God loves Cowboys” which is apparently an Aaron Watson if my Twitter mentions account for anything. Here’s a link to the video.

• Gundy said the defense took it to the offense for a couple days this week and that enthusiasm of players is increasing each year. He also said, “We’re pleased with where we’re at but we haven’t answered any of the questions we need to answer over the next two weeks.”

• On the backup QBs: “Waiting for one of those guys to say, ‘I’m the guy.'” He said it should be in the next 10 days. I’d be shocked if it’s not Taylor Cornelius. He was throwing seeds today and has a couple of year of experience on everyone else.

• On the defensive youth: “I feel better now about our corners than I did when we started.”

• Gundy said he would prefer the defense did better in camp. The talent part of it is so important and the speed. He said it’s nice when the defense can shut down an offense like OSU’s.

• No substitute for experience (on OL). Helps that all of the OL are veteran guys.

• I asked him what’s next for innovation. He said they’ve been coming to two-a-days later and leaving earlier. That’s new in Stillwater this year. More time for the players away from football and some extra time for coaches to film it up afterwards.

• On Rudolph: “He’s going to be talked about as one of the best to ever play here. He’s been focused and done great.” Also said he’s gotten a lot of notoriety and done really well. So driven and worked so hard. Likes what he’s doing from a leadership perspective more than previous years.

• He went deep on a sleep study Rob Glass has been using with players. “Early studies has proven that it’s effective.”

• Gundy asked his team questions when they got together a few weeks ago and said, “They still live in their own little world. You’d be surprised that they probably don’t pay a lot of attention to (the marketing of the program). The people outside are more in-tune to it.”

• He said the Sinor Heisman campaign was “One of the neatest things ever. That’s his personality.” He’s marketing himself. Gundy told the punt team, “You’re trying to protect for a Heisman candidate.” Sinor: “Yeah, that’s right.”

• Gundy said Rudolph played when he was hurt early in his career to get team’s respect. He got them on his side then. “He’s played beyond the injury.” Other than making Twitter videos in the summer at lakes, he’s pretty straight line. “We’re fortunate we have a guy who can stay focused and lead the team.”

• Gundy said being a QB is an advantage in being a HC someday because it requires some of the same characteristics.

• They (the players) don’t care that people are saying OSU is good. Four or five years ago (2013), “that was the talk around. There’s a lot of conversation about it, and our players don’t concern themselves with it. They’ve gotten used to it.” This was pretty interesting to me. Gundy was open about how good he thinks OSU is going to be (both with the media and with his team), and his players have taken it well.

• On long-term plans: “Building tradition takes a long time.” Wants to be tradition-rich football school when he’s done. On the way. Not there yet. Gundy’s message to the players: “You should have a good team.”

• He said he heard Bill Snyder tell a reporter, “I’m 78 and they’re 18, I have no idea what’s going to happen (this season).” He noted that he thinks Snyder is more or less right and agrees with him.

• “They don’t have stars in their eyes …” Said OSU wants to consistently break the top 25. If you’re ranked where OSU is and play well you’re going to be there in the end. You’re in a good position to start the year.

• Preseason expectations for Gundy are all about QB with experience. Said OSU has experience at key positions and has depth on both sides. Without experience, you have to make up ground — score and stop people. Said OSU expects to be good because of experience.

• On Cornelius — who knows what will happen if he plays. Gundy said he wasn’t excited about Mason in 2014. What Rudolph has accomplished is “pretty rare.” If (Cornelius) gets in a game and plays, he’ll play pretty well.

• Thomas asked him if he still watches games at home and writes plays on his Big Chief notepad. He confirmed that he collects 5-6 plays every Saturday night.”Frustrates my boys,” he said because it takes a while to rewind and get all the positions right on his notepad. His sons already know who won on their phones because of it. He brings the plays in on Sunday morning.

• “Ramon gets a little better every day. I think he’s better in the middle of the field.” Most of his communication is with safeties. “Knowing Ramon, he’s involved with the corners in some way.”

• “Physically, Marcel looks really good. The change that’s noticeable is that he lost football for a year. He knows what it’s like to not have it. That was the biggest change for him.”

• On his contract: “My first goal is to get everyone taken care of outside of the coaches. The coaches have always been taken care of.” Was talking about support staff, I believe.

“Coach Holder and I were able to come to an agreement, we were able to put that aside. We don’t have to have any more discussions about it. That’s what’s best for the long term in terms of relationship between me and the university.”

• Said one of his kids told him, “All you do is sit at your desk.” His reply: “I’m thinking about what to do.” His kid: “You just go up in that tower (at practice). You don’t talk to anybody there either.”

I actually loved this exchange. The sign of a great organization is the space for its best leader to think and innovate.

• On expectations: Said they used to tell the team they were average. “If I were them, I’d walk out thinking, ‘We’re pretty good, why is he telling us that?'” Sort of said he doesn’t care about properly setting expectations now because the team is mature enough to receive it. “They’ve handled it well.”

• “If my hair is long and we’re losing, it’s not very fun. People are going to say cut your hair all the time.”

Said he wants eight games at home on Saturday, at 2 p.m. Hopes the mid-week games (specifically the Thursday game against Tulsa because that was the one the Big 12 pushed for) will make B12 happy for a while (South Alabama was a separate deal). “I told (Big 12 commissioner Bob) Bowlsby we did it for him.”

• On backup RBs: “I like what Ja’Ron (Wilson) is doing. LD is getting better. Carr is still there. I like the freshmen.” Haven’t seen enough to say it yet. Still too early. Glimpses of both those young guys making plays. LD needs to take care of the ball.

Kind of made us think Ja’Ron has a real chance at getting the backup position.