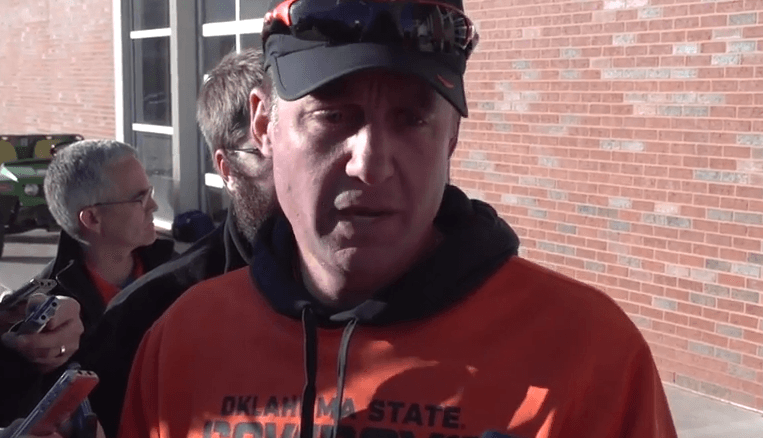 Ed. note: I’m not sure if this will be Gundy’s only pre-bowl press conference or if this was a Tyreek special but he spoke to the media on Monday about a variety of things. Clint Davison took notes…

• “The decision (to cut him) had to be made and I was the one who made that decision. I made the best decision I could for Oklahoma State University, for this team, and hopefully for Tyreek.”

• “I would just ask that you guys don’t ask the players about it because it’s a very difficult situation for them. This will be the last time I comment on it.”

• He apparently meant Tuesday would be the last time he commented on it because when Tramel pursued it again, Coach had more to say. Tramel asked, “Did this just knock the wind out of you?”

• “They all do. You come off of a certain feeling and then you have an incident like this, it just makes it extremely difficult. We try to stress to these guys, there’s just certain things right now society frowns upon. We tell these guys, if there’s any kind of conflict, you have to run – just run away.”

I’d like to think society will always frown upon men hitting their pregnant girlfriends…but I know what he was saying.

• He was asked if it was a tough decision: “Well, the decision’s not tough. It’s an extremely difficult process to get to the decision, but the decision had to be made. I feel for the young lady, and I feel for Tyreek.”

• “We educate our players and very seldom does a week go by that I don’t tell them twice, ‘You have to be aware of those situations. You have to walk away, and then you have to run.’”

Really like to hear that – great advice for any potential conflict.

• Is this team going to miss him on the field? (Duh!) “Certainly. But, we have other guys who are going to step up. Oklahoma State football’s going to go on forever with or without me, with or without Tyreek, or anybody else on this team.” Well said!

• Coach was asked how hard this has been on the team and had some insightful answers: “It’s not getting ready to play. They’re fine – practicing well. It’s like Ogbah said, ‘I’m just lost for words.’ I think that’s really where we all were. But, as far as preparation and practice, they’re fine.”

• “The energy level we got from that game has not been diminished. It was just a shot in the gut for all of us. You guys have to image it as being one of your own children. It’s just gut-wrenching.”

• “But, the excitement level for these kids is pretty high at this time.”

• Now, on to talking football! On prepping for U-Dub:

• “Defensively. They’ve done some schemin’ depending on who they’ve played. Got a couple guys that are really talented. They can run, tackle, can blitz, can make some plays.”

• “Our health is good. Koenig should be back in a couple days. (!!!) Other than that our health is really good.”

• Asked about dealing with Washington’s 3 All-American’s in the defensive front:

• This was a good question – Gundy was asked if it’s too early to tell what the Bedlam win did for this team: “No, it did a lot.”

Could you explain… “Just the approach, pushing through. I got on them at halftime a little bit because I thought they were soft…and they accepted the challenge.”

• “The spirits and the attitude that’s been lifted from this game, it’s never too early and you can certainly tell the results from a win like that. It’s been a huge lift for us. Maybe the biggest of my career here.”

• Coach also had some good comments on Mason and Daxx.

• Where is Mason today compared to where he was? (What?)

“Farther along. Mason’s got a long ways to go. But, whenever you’re in charge, which he is now of the offense, things happen for you, it’s a little easier to make plays.”

So did he ALREADY name a starter for the bowl game!?

• On Daxx: “Daxx had a tough 5-6 games, took a lot of hits and he’s been tremendous in his work ethic. We’re very appreciative of where he’s got us. But, Mason’s improved considerably over the last two weeks.”

• Back to Rudolph: “He played in two tough environments and his demeanor and his approach was pretty impressive, in my opinion.”

• This was great! He was asked about Mason handling the situation in Norman, down 14 with time slipping away:

“The word on him when we recruited him and when he committed here was that he would be a better player in the game than he was in practice. As coaches, you’re always somewhat hesitant to buy that; but, he’s competed, shown toughness. He’s a little too aggressive at times, but that’s part of it. He wants to be the guy that makes That Play.”

I am all in on Mason Rudolph!

• What about the 3rd down in OT, was he suggesting to pass? “Yes.” How did that conversation go? “I told him he’d lost his mind.”

• Now, for the first time for this little segment of PFB, some player quotes on preparing for the bowl game!

• Mason: “It’s a blessing to be able to have these extra practices with your friends, your teammates. We’re having a great time, grinding every day, getting better and looking forward to getting to Arizona.”

Did I mention I’m all in on this kid?

• Brandon Shepherd: “It brings a lot of joy in the sense that we have another game with this group of guys.”

• Kevin Peterson: “It’s more time we get to spend with each other. Coach Gundy makes bowl games like a vacation. We’ll be in a whole other state, out in Arizona, having fun and playing the ball we love.”

Teach me how to Gundy!!

• James Castelman: “We kept working, kept grinding, kept hitting them in the mouth, and sure enough, we pulled it out.”

• Des Roland: “I’m fortunate enough and blessed that this will be my 4th bowl game. Four bowl games in four years, you can’t ask for much more than that.”

• Ryan Simmons: “I’m just more happy we have this time to practice and be around each other and be able to go to another bowl. You know, we could’ve just been at home, but I’m glad to be able to be around this team.”