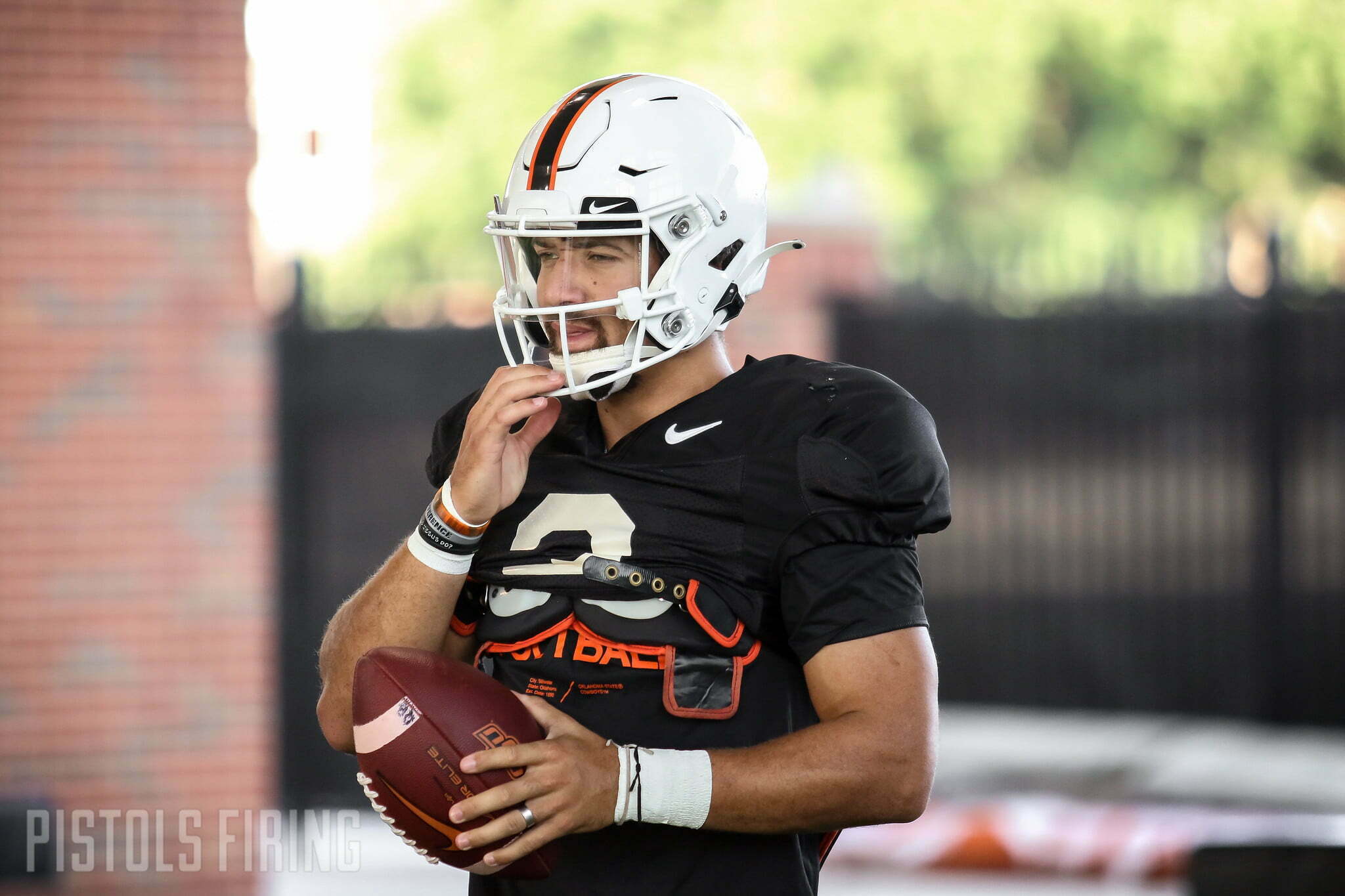 While Oklahoma State’s defense should again be a strength in 2022, there are definitely questions to be answered and holes to be filled on that side of the ball. So, if the Cowboys offense can put a few more points on the board and extend a few more drives this fall, it should pay dividends for OSU. But an offense will only go as far as its quarterback can captain it.

Fortunately for OSU, Spencer Sanders is entering Year 4 as a starter and looks ready to take the next step, according to offensive coordinator Kasey Dunn.

“Right now, he’s comfortable,” said Dunn of Sanders on Thursday. “It’s kind of a word that you don’t want to use often because you want guys to feel a little uncomfortable in order to raise their bar all the time to higher and higher levels, but he’s comfortable so he’s playing smooth, playing fast and he knows when the formation’s not right to run a certain play.

“He’ll get receivers in position. He’ll make sure that the offensive line is set the right way and all those little things matter because the whole thing of ‘coach on the field,’ he really has become that for us.”

While he said that he still gets butterflies before a game, Sanders acknowledged the benefits of five years in the system and going on four years as “the guy.”

He said his decision-making has improved as well as his ability to operate the offense. As a seasoned leader, he also recognizes his responsibilities extend to making things easier for his teammates, especially the cast of young playmakers around him.

“Obviously, it’s probably just very comfortable,” said Sanders. “You know, it’s really not about my comfort level though, it’s about the guys around me. I want to make them feel as comfortable as possible because the more comfortable I can help them feel, the best they play. The more you’re comfortable the better you play, the more loose you play.”

Mike Gundy could earn career win No. 150 on Thursday against Central Michigan, but Sanders — who leads all offensive Cowboys with 32 starts and is second on the team — will be looking for career win No. 24 as a starter. Just eight more Ws and he’ll be OSU’s all-time winningest QB.

Sanders has provided OSU fans with plenty of oos and ahhs during his time as QB1, but he’s also given them plenty of bouts of heartburn. Throughout his career, he’s shown a propensity to force the issue at times and, subsequently, commit some head-scratching turnovers.

To be fair, Sanders seemed to have turned a corner in that department down the stretch last season — until he threw four interceptions in the Big 12 Championship.

He still came within inches of leading the Cowboys back to a come-from-behind win and their second Big 12 title. He also followed up that heartbreak in Arlington with maybe his best career performance in a comeback win over Notre Dame in the Fiesta Bowl. The 2022 Pokes tied a program record with 12 wins.

Along the way, Sanders joined Brandon Weeden as one of only two Cowboys to ever be voted all-conference first-team quarterback. And despite a slew of big-name newcomers to the Big 12 — like Quinn Ewers at Texas, Dillon Gabriel at OU and JT Daniels at West Virginia — Sanders was tabbed as the preseason pick to be the first Cowboy to ever repeat that honor.

Along the way, he’s also turned into one heck of a leader.

“Spencer’s done a great job,” said Dunn. “He’s taken over as the guy and is undoubtedly our leader, and he knows it. So he goes out and breaks the huddle, brings everybody up. After practice, he’s always the guy that collects everyone. And you can see it in the way he operates on the field. He’s the guy that’s just got everybody moving and gelling and playing fast and that’s what we want to do.”

So much about playing the quarterback position in college is about that experience and understanding of the offense. He’s got both.

Now, with potentially two years left at the helm thanks to COVID, Sanders has the rare opportunity to continue to grow into a Cowboy figurehead with an ever rarer mix of experience and dynamic playmaking potential — probably unlike any ever at OSU, if he stays healthy. Sanders, and OSU fans, could be in for a fun year. Maybe two.