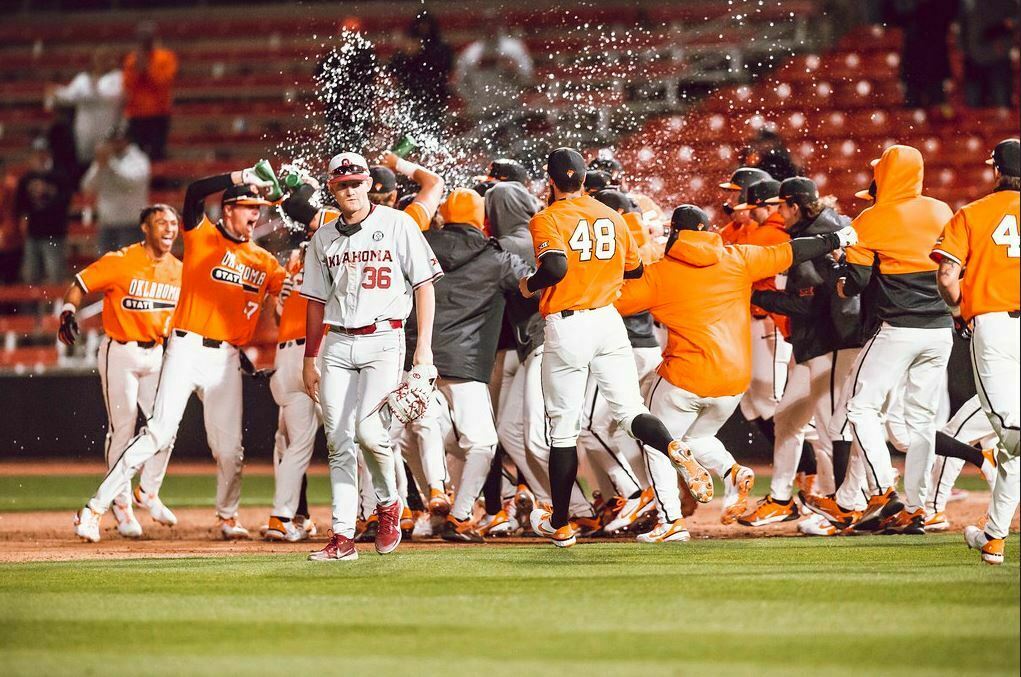 Oklahoma State beat Oklahoma 5-4 on Tuesday night in O’Brate Stadium thanks to some late-game dramatics that ended in a Caeden Trenkle walk-off single.

The game went into the bottom of the ninth tied 4, where the Sooners failed to record an out. Justin Campbell came in as a pinch hitter and knocked a leadoff singe to right. Jaxson Crull followed that up with a wicked bunt single.

Then it was back to the top of OSU’s order, and Hueston Morrill dropped down a bunt with two strikes. OU tried to get Dylan Gardner, who pinch ran for Campbell, out at third, but the throw wasn’t in time.

With the bases loaded and OU’s infield playing up, Trenkle sliced a ball past OU second baseman Conor McKenna to end the game.

“I give a lot of credit to lose guys in front of me,” Trenkle said. “They made my job easy.”

The Cowboys jumped off to an early lead, scoring two runs in the first off a Max Hewitt double.

The Sooners’ runs came via strategery. Diego Muniz scored off a sacrifice fly in the second. OU then took a 3-2 lead in the fourth after scoring off a fielder’s choice and a groundout.

OU added another run in the top of the fifth after a walk and back-to-back bunts put runners on second and third before another sacrifice fly.

Only one of the Sooners’ runs were earned, as OSU had costly errors in the second and fourth. Cabbiness had a tough break in the second when he lost a ball in the early evening O’Brate shadows. The ball got by him and turned a would be line out into OU runners getting to second and third.

OSU had the potential to blow the game open in the bottom of the fifth but couldn’t quite capitalize.

Down 4-2, the Cowboys had the bases loaded with no outs. Christian Encarnacion-Strand then got hit with a pitch to score a run before Hewitt tied the game with an RBI single to left.

Still with no outs and the bases loaded, Carson McCusker struck out before Cade Cabbiness grounded into a double play.

OSU closer Brett Standlee came in with two outs in the ninth and threw one pitch to get the win. He is now 3-0 on the year.

A walk-off win against an in-state rival in a new stadium might be the best way possible to get a milestone win, and that’s what Josh Holliday did Tuesday.

The walk-off W was Holliday’s 300th win. He ranks fourth in program history in career coaching wins, but he could get as high as No. 2 by the end of the year. It’s going to take a while before he catches Gary Ward’s 953.

“I didn’t know I was at 299, so I wasn’t sitting around thinking about 300,” Holliday said. “… When you coach at Oklahoma State, you’re hired and you’re supposed to win. That’s why you get hired. That’s just the joys of the job. It’s an honor to coach here, and we’ve had a lot of great players. I would say that’s a byproduct of the good work those kids have done.”

Switch Up on the Mound

Bryce Osmond was initially scheduled to start this game on the mound for the Pokes, but when the lineups came out, it was Mitchell Stone on the bump.

OSU is playing Thursday, Friday, Saturday this weekend because of Easter as opposed to Friday, Saturday, Sunday. So, Holliday explained he didn’t want to rush starters back and that Osmond was going to start Thursday’s game against West Virginia.

“It’s just a decision made on behalf of the team and everybody’s wellbeing,” Holliday said. “Just kind of looking at the collective whole, it gave somebody an opportunity tonight. I’m happy for Mitch and the guys that pitched behind him.”

Two games might be too small of a sample size, but Max Hewitt might be a Sooner killer.

In two games against OU, Hewitt is 3-for-5 at the plate with four RBIs.

The Canadian’s first game against OU was in 2019, where Hewitt subbed in in the eighth and hit a walk-off single in the ninth.

Hewitt started Tuesday’s scoring with an RBI double down the right-field line in the first, scoring Nolan McLean and Encarnacion-Strand.

Hewitt delivered again in the fifth when he hit a single to left to score Trenkle. That hit tied the game at 4.