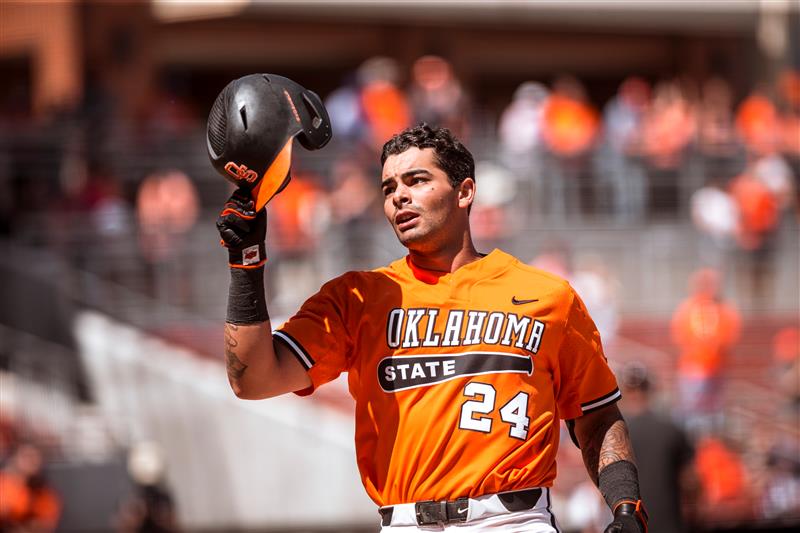 STILLWATER — In a series that was thrown together because of COVID complications elsewhere, the Cowboys picked up their third three-game series sweep of the season.

We’ll go further into what Encarnacion-Strand is doing in a bit, but Wrobleski, a transfer from Clemson, threw seven innings in which he allowed three runs on seven hits while walking none and striking out five.

He dropped his ERA down to a 4.08. It would’ve dropped further if it wasn’t for two pitches that resulted in solo home runs for the Seahawks.

Wyatt Cheney and Trevor Martin came out of Rob Walton’s bullpen. The pair combined to throw for two innings where they gave up one run on three hits while walking one and striking out one.

The Cowboys hit a trio of home runs with Encarnacion-Strand starting the game with a two-run shot in the first inning. Freshman Nolan McLean hit his seventh of the year in the third, this one going to straightaway center.

In the eighth, Alix Garcia hit his third home run of the year, this one being a solo shot.

The No. 11 Cowboys are back in action Tuesday, as they host Oral Roberts. Here are a few takeaways from the game.

There was no question who the player of Sunday’s game was. It’s the same person who has been the MVP of OSU’s season thus far: Christian Encarnacion-Strand.

The transfer third baseman was 2-for-4 Sunday with four RBIs, two of which came on his team-leading 10th home run of the season. He hit it opposite field, as it went all the way out of the stadium in right field.

He also hit a bases-loaded single through the left side in the fourth inning that scored a pair.

He hits for power while hitting for average, as his .365 batting average leads the Cowboys among batters with at least three at-bats. He also has 37 RBIs on the year. The next closest Cowboy has 21 (Max Hewitt).

“He’s strong,” OSU coach Josh Holliday said. “In order to be a consistent player, you gotta be strong. Fatigue sometimes will get guys. He’s a very strong kid. He has work ethic, so he is consistent in that he does the work every day.

“I think he is here for a reason, and that’s to propel himself to the next level. He has a purpose. In addition to being strong and working hard and having good ability, he has a vision of where he’d like to go in his career. I think that drives him.”

UNC-Wilmington had a pair of coaches tossed Sunday.

The first came in the bottom of the sixth when Cade Cabbiness ripped a line drive down the left-field line. The umpire ruled it fair. The coach argued it should have been foul. The play was already going to be reviewed. The egg fell further on the coach’s face, as the call turned out to be correct.

Then another Seahawks coach got tossed before the seventh inning started. OSU was warming up when UNC-Wilmington’s third-base coach got the axe. A pitch hadn’t even been thrown in the inning.

Perhaps the most comical part of all of this is the visitor’s dugout is on the first-base line, but the visitor’s locker room is beyond the fence in left field. So, the coaches had to get their bags out of the dugout and slowly walk all the way across the field.

“Probably should’ve put an ejection tunnel underground,” Holliday said. “That’s something we left out of the original design.”