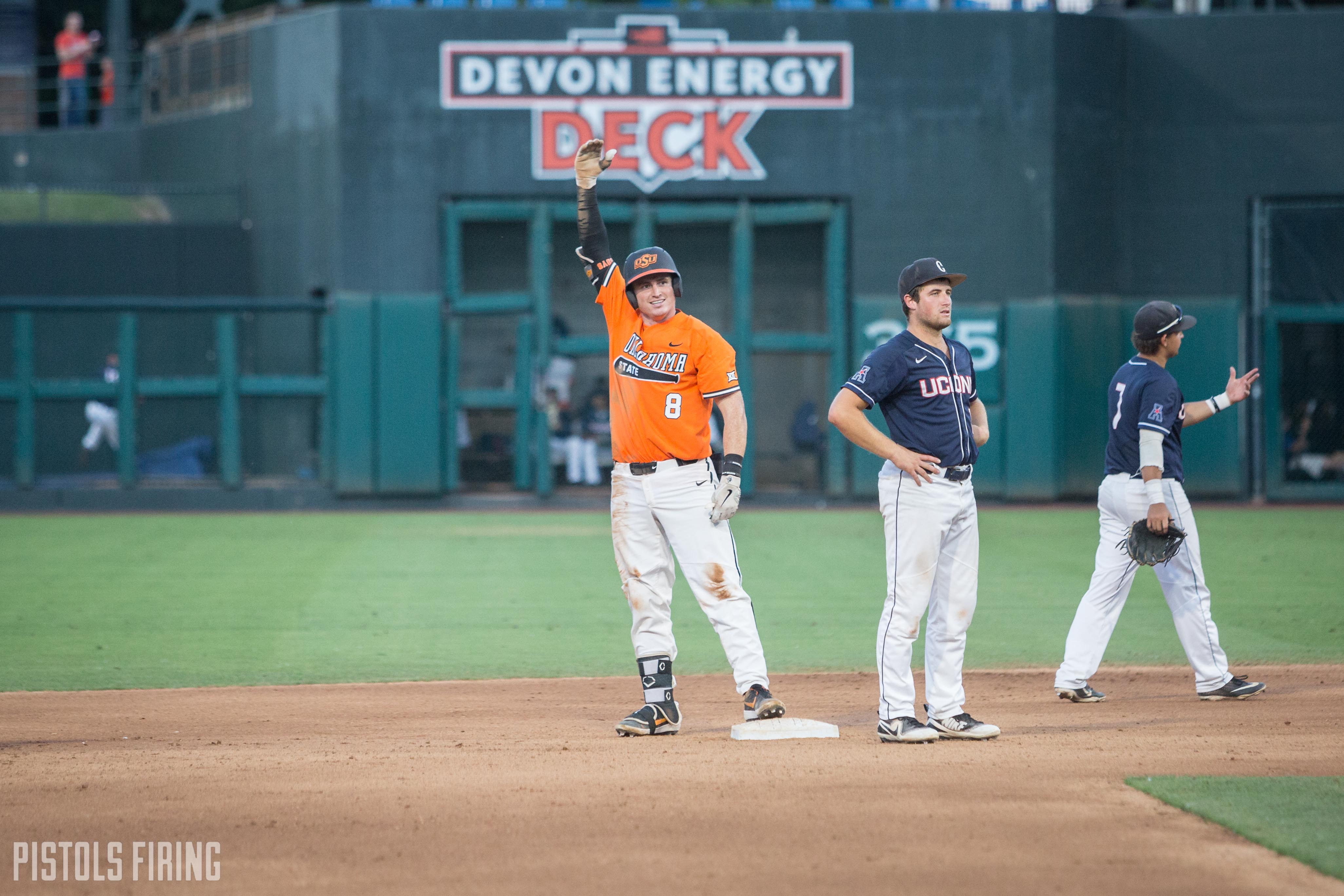 OSU never got a shot at Emeka Okafor and Ben Gordon in 2004* at the Final Four because … well … Luke Schenscher, but the Pokes surely took out that frustration on the 2019 UConn baseball team (because there’s a lot of crossover there) as they got past the Huskies 3-1 on Monday in OKC to advance to another super regional.

UConn struck first in the fifth with a run, but Alix Garcia hit a solo shot in the bottom half of the inning to tie things up. OSU would never trail again.

Carson McCusker hit a two-run double in the bottom of the sixth to make the score 3-1, which is where it would stand the rest of the way. McCusker also made some terrific plays in left field.

With the grace of a gazelle…

Trust us… It was a great catch…

Joe Lienhard started for the Pokes and went six strong before ceding the hill to Peyton Battenfield, who gave up no runs and no hits while striking out five in the final three innings.

“You know what the best part is,” said head coach Josh Holliday. “We get to stay together for another week. We get to keep doing this together, baby.”

“You know what the best part is?
We get to stay together for another week.” –@joshhollidayosu pic.twitter.com/VdN1gSFsTk

It moves OSU to 39-19 on the season and means they will advance to their third super regional under Josh Holliday. OSU is 1-1 in supers under Holliday, with an 0-2 defeat to UC Irvine (in Stillwater!) in 2014 and a 2-0 pasting of South Carolina to go to the College World Series in 2016.

The Cowboys will take on Texas Tech in Lubbock, which is important for a few reasons. The first is that OSU is 0-3 against the Big 12 champs this year, and it also means that Allie P. is officially cooked. There was a chance if a lower seed won the Tech regional that OSU would get to host, but now they’ll head to west Texas for a shot at Holliday’s second CWS in the last four years.

The good news for Holliday and Co. is that OSU is 14-3 since getting swept by the Red Raiders at the end of April. The bad news is that Tech is also streaking, having played their last 17 since that series in a 13-4 record.

Winner gets guns up forever (and a trip to Omaha).

*Did you know that team had six (!) future NBA players on it?!