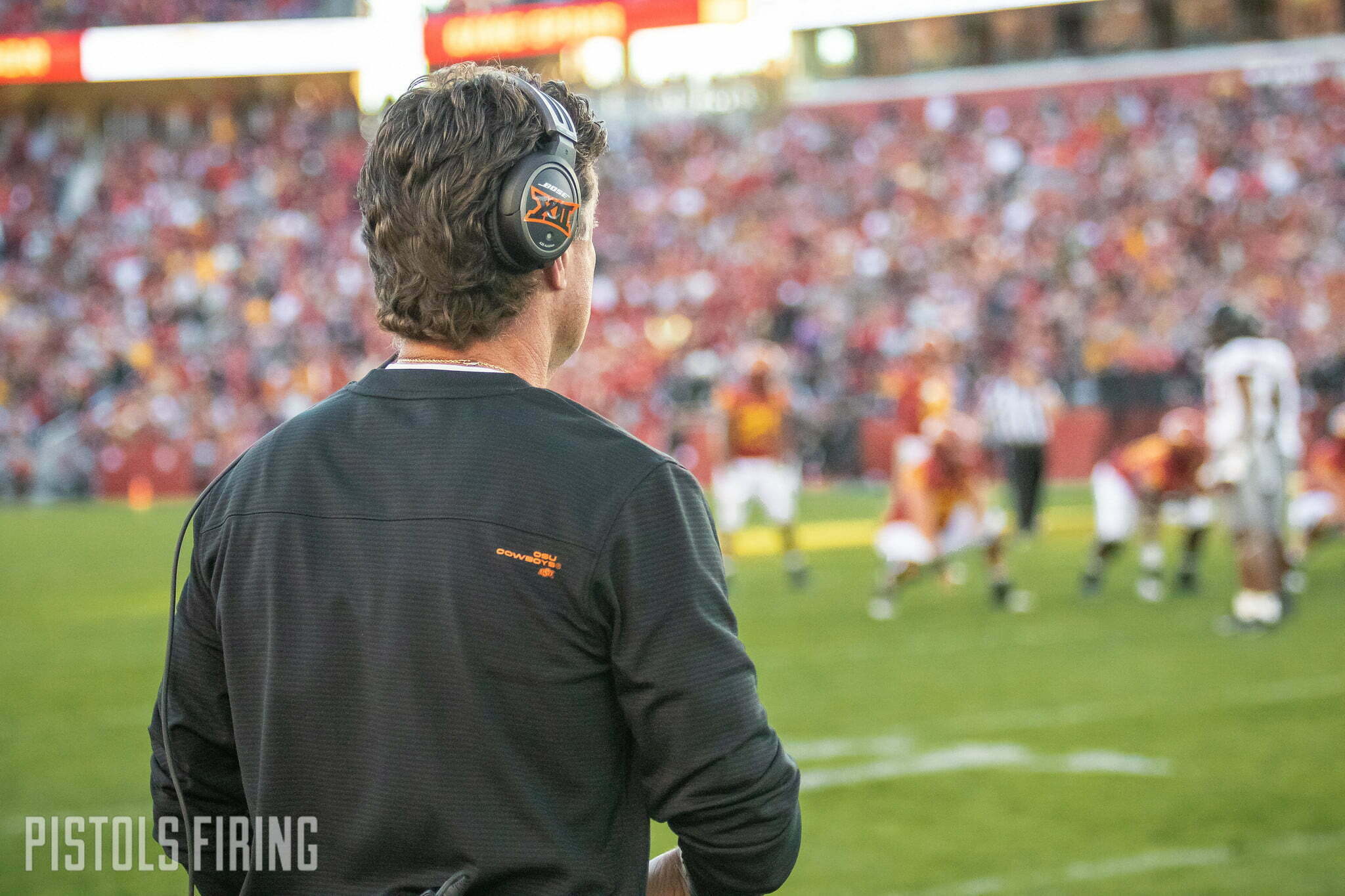 Saturday was Junior Day at Oklahoma State, where more than a handful of 2023 prospects were in Stillwater to get a feel for the program.

Two of Oklahoma State’s 2023 commits were in town, as were a good amount of in-state gunslingers. Here is a list of some of those in attendance for Saturday’s festivities.

Taje McCoy, Edge: An in-state standout at Putnam City, Taje McCoy was in Stillwater on Saturday and left with an offer. Listed at 6-foot-3, 245 pounds. McCoy had 89 tackles this past season, including 18 tackles for loss, six sacks, a fumble recovery and an interception. He is unranked for the time being but also has offers from Baylor and Kansas.

Trey Wilson, DL, 4⭐: The No. 335 player in the 2023 class, Wilson has had an OSU offer for a year now, and this weekend wasn’t his first time on campus. He visited during the summer and was also on hand for OSU’s 63-17 victory against TCU. Listed at 6-3, 230 pounds, Wilson hails from Lakeview Centennial High School in Garland, Texas. A prospect of Wilson’s quality will have plenty of suitors; he also has offers from Arkansas, Michigan, Baylor, Arizona State, Ole Miss and others.

Kam Franklin, ATH, 3⭐: Already an Oklahoma State commit, Franklin pledged to the Pokes on Nov. 21, seven days after watching the Cowboys thrash TCU 63-17 in Stillwater. The Cowboys have recruited Franklin, listed at 6-3, 185 pounds, as a safety. From Oak Grove, Louisiana, Franklin picked OSU over offers from Arkansas, LSU, TCU, Tennessee and others. He is the No. 535 player in all of the 2023 class.

Jaedon Foreman, DL, 3⭐: Another Oklahoma State commit, Foreman has been on OSU’s campus myriad times to this point. Out of Del City High, Foreman is the No. 543 player in his class. Listed at 6-3, 250 pounds, Foreman also had an offer from Memphis by the time he committed to OSU. He also plays basketball for Del City.

Jaylon Braxton, CB, 3⭐: Oklahoma State has signed players from Lonestar High School in Frisco in back-to-back classes, why not make it three? Braxton picked up an Oklahoma State offer in September. He is the No. 365 player in the 2023 class and listed at 5-11, 160 pounds. OSU plucked Jaden Nixon from Lone Star in 2021 and signed Garret Rangel in its 2022 class. Braxton’s brother, Braylon, is a quarterback at Tulsa.

Keaton Kubecka, WR/TE, 3⭐: A standout at Westlake High School in Austin, Kubecka doesn’t yet have an Oklahoma State offer, but he does have offers from Houston, Kansas, Arkansas State and Marshall. Listed at 6-3, 185 pounds, Kubecka had 42 receptions for 714 yards and 12 touchdowns this past season.

JaKobe Sanders, OL, 3⭐: A Stillwater High standout, Sanders received an OSU offer in November. Listed at 6-2, 280 pounds, Sanders is a three-star prospect, according to 247Sports, and listed as the No. 9 player in the state in his class.

Rohan Fluellen, ATH, 3⭐: The No. 537 player in the 2023 class, Fluellen doubles as a wide receiver and a defensive back for Gilmer High (Texas). He had eight interceptions, four pass breakups and 38 tackles this past season to go with 88 receptions for 1,420 yards and 11 touchdowns. He has yet to report an Oklahoma State offer, but he does boast offers from Tennessee, Houston, SMU, Pitt, Wisconsin and others.

Terrance Green, OL: Green has had an Oklahoma State offer for a little over a month now, and Baylor, Colorado, TCU and Houston have joined the party since. Green is listed as a defensive lineman on different recruiting services, but in both his offer tweet and his tweet about Junior Day, Green has mentioned OSU offensive line coach Charlie Dickey. Listed at 6-foot-5, 250 pounds, Green plays at Cy Woods High in Cypress, Texas. He had 40 tackles, 11 tackles for loss, 5.5 sacks and a pair of fumble recoveries this past season.

Kyson Brown, RB: A Lancaster, Texas standout, Brown doesn’t yet hold an OSU offer, but he does have offers from Marshall, SMU and Incarnate Word. He is listed at 5-11, 190 pounds.

Todd Drummond, QB: A 6-4, 190-pound passer, Drummond has spent the past few seasons connecting with 2022 OSU signee Mason Gilkey. From Pawhuska, Oklahoma, Drummond has an offer from Lamar. He is also the son of the Pioneer Woman, Ree Drummond, of Food Network fame.

Haeven Watson, CB: A 5-11, 160-pound corner, Watson doesn’t yet have any offers , but he has been on plenty of visits to the likes of Baylor, Texas Tech, Kansas State, SMU, UTSA and Texas State. So, it feels like a matter of when, not if, his recruitment process takes off. He plays at Veterans Memorial High School in San Antonio, Texas.

Chance Wilson, QB: Another in-state quarterback, Wilson plays at Rejoice Christian in Owasso. Listed at 6-3, 180 pounds, Wilson has an offer from New Mexico State. As a junior, Wilson threw for 2,857 yards and 40 touchdowns to only five interceptions. He also ran for 1,281 yards and another 22 scores.

Kirk Francis, QB: A 6-2, 170-pound quarterback for Metro Christian in Tulsa, Francis was on hand for OSU’s games against Tulsa and Oklahoma this past season. He doesn’t yet have any DI offers, but he has also been on visits to TCU, Kansas, Tulsa and North Texas.

Austin Havens, QB: A 6-3, 190-pound quarterback for Owasso, Havens doesn’t have any DI offers yet, but he has eyes on him from far and wide. He’s also been on visits to Kansas State, Virginia Tech, Mississippi State and Northwestern.

Stephon Johnson, WR, 3⭐: There was also a highly touted 2022 prospect on campus this weekend in DeSoto receiver Stephon Johnson. Johnson has recently reopened his recruitment after decommitting from Oregon at the beginning of the month. He is the No. 523 player in his class and has offers from USC, Oregon, Ole Miss, Penn State, Arkansas and others.