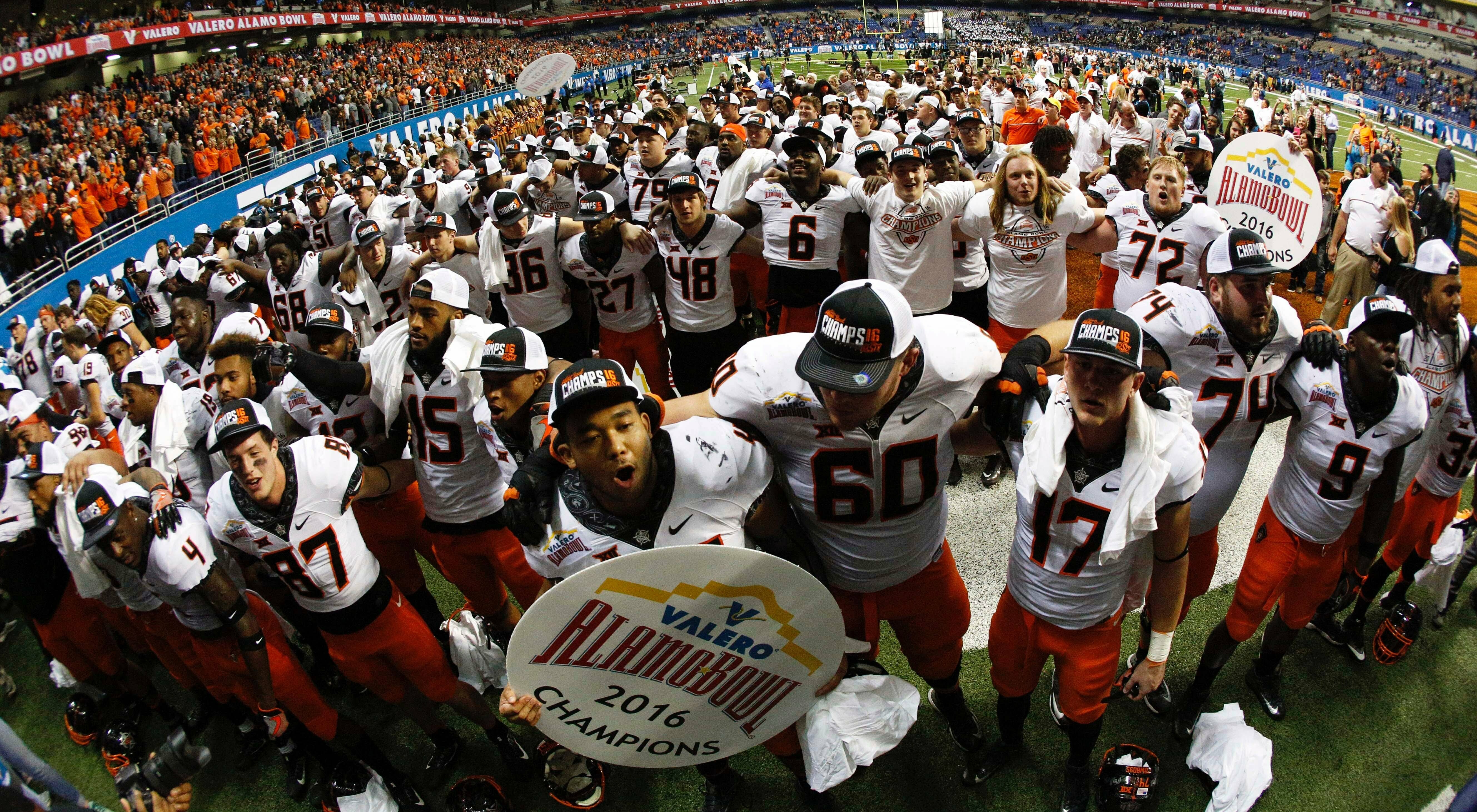 Oklahoma State ended the season on a good note and has a ton of talent coming back. Add to that the fact that we’re heading into the odd-year season schedule which brings, Oklahoma, TCU, Baylor and Kansas State to Stillwater and you’ve got a fan base that’s brimming with optimism.

But what are the expectations for Oklahoma State nationally? Let’s take a look.

Coach Mike Gundy has guided the Pokes to 10-win seasons in five of the past seven years, and after back-to-back second-place finishes in the Big 12, they might be ready to challenge Oklahoma for the title. They’ll get to play the Sooners at home in the Bedlam game next season, and the Pokes will also host TCU, Baylor and Kansas State in Big 12 play.

ESPN has been very OSU-friendly this offseason, being the only poll I’ve seen where they are ranked ahead of Oklahoma for tops in the conference. No. 7 seems a bit high but I’m okay with the nod over OU who is losing nearly all of their skill players minus Baker Mayfield — who’s still pretty good, by the way.

To call Oklahoma State a sleeper ignores the fact that this program has been in the national picture for the better part of the decade. But there seems to be something overlooked about the Cowboys, who return the heart of their offense and have enough coming back on defense to be right alongside or just behind Oklahoma on the Big 12 ladder.

No. 10 is right where I would have them. The 10-13 range is good. Yes, they have a ton returning and finished well but the Bedlam monkey has returned to a perched position on Mike Gundy’s back and this team is too experienced to keep messing around with lesser teams in the non-con. It finally bit them in 2016. Let’s hope they learned their lesson.

Bet you didn’t know Mike Gundy has won at least 10 games five of the past seven years. He’ll have enough offensive weapons again to win the Big 12. The question is whether the Cowboys will have even an average defense to slow down those other Big 12 spreads. Oklahoma comes to Stillwater, so there’s that.

This is a trend and though I agree there is nothing from an outside view to instill a ton of confidence in Glenn Spencer’s crew, defenses needed to be graded on a curve in the Big 12. OSU will be without a couple of huge contributors but still has a ton of talent on that side of the ball.

The Mason Rudolph-to-James Washington connection will be used frequently in 2017, and the Cowboys should have a strong ground game with running back Justice Hill returning, too.

SI has Oklahoma State at No. 12 just behind Wisconsin and just ahead of Louisville. I don’t have a problem with that.

Mason Rudolph and James Washington decided to return, and that’s good news for a Cowboys team inching closer to that Big 12 championship. One key scheduling note — the home game against Oklahoma was moved up to Nov. 4. The Cowboys have three regular season games afterward.

Again, I think the Cowboys should be around the 10-13 range. So in a made-up opinion poll I’m not going to complain about two spots.

Mike Gundy is one of the most underrated coaches in America, quietly winning 10 games five different times this decade. And with the surprising returns of both QB Mason Rudolph and WR James Washington, anything less than a sixth double-digit win campaign will be a disappointment. Can the Cowboys catch Oklahoma in the Big 12? Depends on the maturation of a middling D that’s going to miss DT Vincent Taylor and S Jordan Sterns.

I definitely agree here. For all the reasons we listed above, less than 10 wins is a disappointment for this team.

If a team has a good quarterback, it will always have a chance, and that’s precisely the case with Oklahoma State, who welcome back QB Mason Rudolph for his final season. Rudolph finished 2016 with a 92.3 overall grade, and a 90.0 passing grade, both marks ranked second among quarterbacks. Rudolph has shown good progression throughout his time in Stillwater, he posted a 69.0 grade in limited action as a true freshman, then an 86.4 grade in his first full season as a starter in 2015. The Cowboys he takes yet another step forward in 2017, to make them a legitimate playoff contender.

Let’s hear from the blogs…

An elite offense is sometimes all you need to win the Big 12, and the Cowboys might have the conference’s best in 2017. Mason Rudolph (4,152 total yards) will be back to lead a unit that racked up 38.6 points per game.

Interesting Big 12 love from the SEC blog — even if it comes with an under-handed defensive slight. It’s all good. SEC Country has five Big 12 teams ranked in their way-too-early poll.

Oklahoma State should be loaded on offense next year. Mason Rudolph and James Washington opted to come back for their senior years. The Cowboys’ leading rusher was a freshman. Most of the offensive line is back. This team should score some points. There are more concerns on defense, where losing Vincent Taylor won’t help. Fortunately, there are no MAC teams on the schedule. Will Mike Gundy finally got a hair cut?

The Big Lead has less respect for the mullet than some but that’s okay. What’s not okay is ranking them behind Texas who they have at No. 15. Helmet sticker rule in full effect.

Oklahoma looks like the clear favorite in the Big 12 again, bringing back most of its Sugar Bowl champion roster, including potential Heisman favorite QB Baker Mayfield.

Not a huge issue with the ranking but — again — ignoring what is lost at Oklahoma in Perine, Mixon and Westbrook. Remember, these polls are just for fun and are normally wrong, but it’s interesting to see how the program is viewed nationally — and how far it has to go.