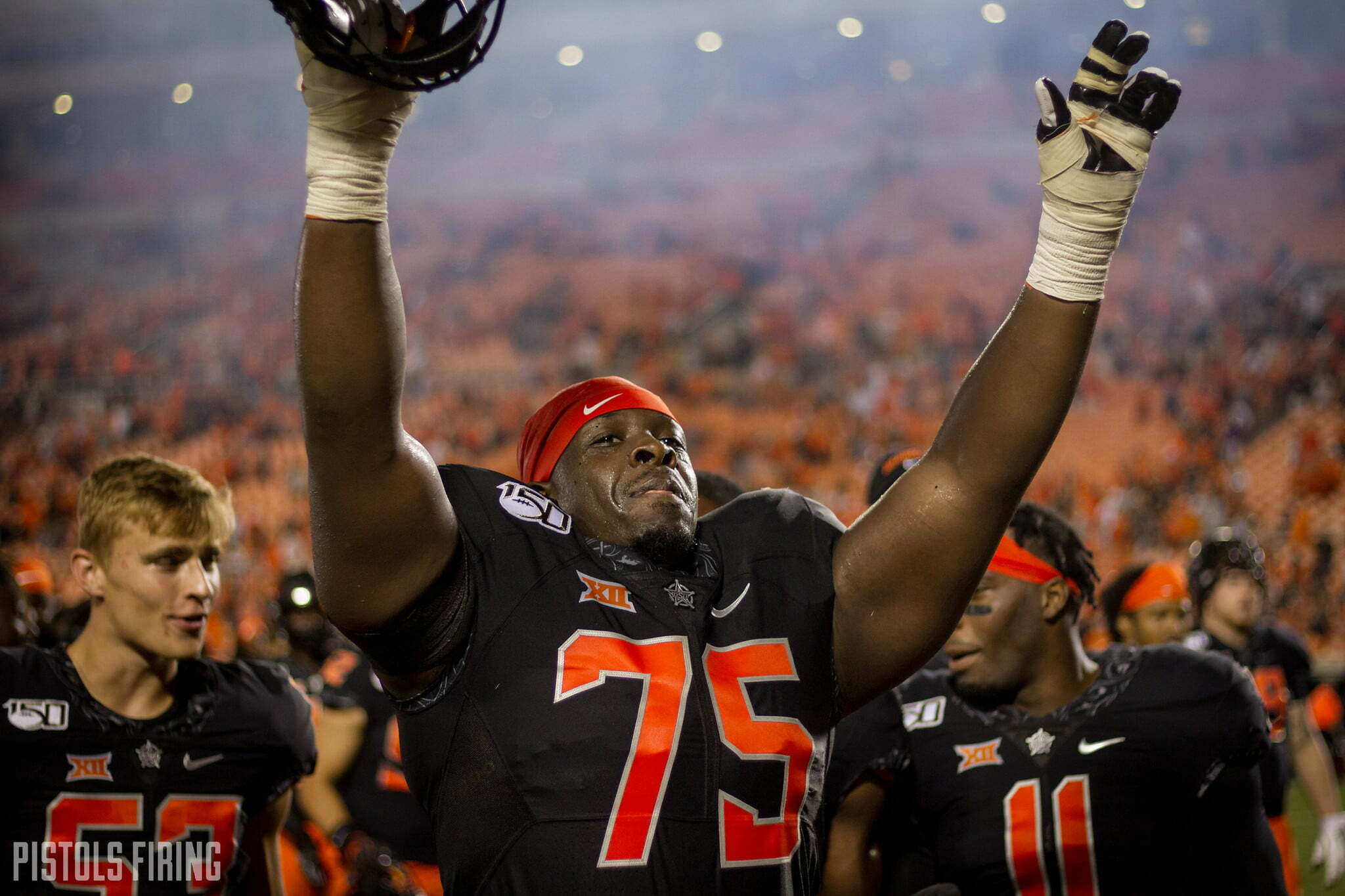 The Cowboys’ offensive line had a good year one in the Charlie Dickey era.

Oklahoma State’s rushing game hit heights it hasn’t been at in a decade, as the unit was able to build upon what was a down year all around in 2018. We’ll look at the Cowboys O-line next in our season grades series.

140-Character Summary: OSU’s group of offensive linemen had a solid year. Chuba Hubbard probably made the group look better than it was at times, but the offensive line certainly helped Hubbard lead the nation in rushing.

Best Performance: The Cowboys absolutely bullied Kansas State on Sept. 28 to the tune of 373 rushing yards, 296 of which came from Hubbard. Spencer Sanders did get sacked twice in the game, but you can overlook that when a running back in the modern game is going for nearly 300.

Worst Performance: Sanders got sacked an inexcusable seven times on Oct. 5 in Lubbock. The Pokes were without starting left tackle Dylan Galloway that game, one of the three games he missed with injury this season. And while Hubbard had 156 rushing yards and three touchdowns against Texas Tech, he did so on a beefy 34 carries.

Best Play: The Tulsa game got dicey late in the first half, but off the bat, it went great for the Pokes.

Hubbard went 75 yards on the first play from scrimmage and only got tapped on the shoulder pad on his way down the middle of the field. Special shout out to center Johnny Wilson who blocked three people in Hubbard’s first five yards.

Stat that matters: 5-1 — The Cowboys’ original starting unit of Dylan Galloway, Marcus Keyes, Johnny Wilson, Bryce Bray and Teven Jenkins went 5-1 when starting together this season, the only loss coming against Texas. That means OSU was 3-3 with a different starting group of offensive linemen.

Bullet stickers (out of 10):  8 — With a bowl game to go, OSU’s 2,835 rushing yards are already the most the program has had since 2008. Sure, the Cowboys boast the best running back in the country, but that also has a lot to do with those blocking for him.

The Future: The Cowboys will lose Wilson and Keyes to graduation after the Texas Bowl. Wilson broke into the starting lineup as a sophomore in 2017, and Keyes has started nearly every game since 2016.

After some down years of recruiting, the Cowboys stacked another signing class of hogmollys for 2020. There will be growing pains with a new center and a new group of five guys meshing, but Charlie Dickey’s group seems to be heading in the right direction.