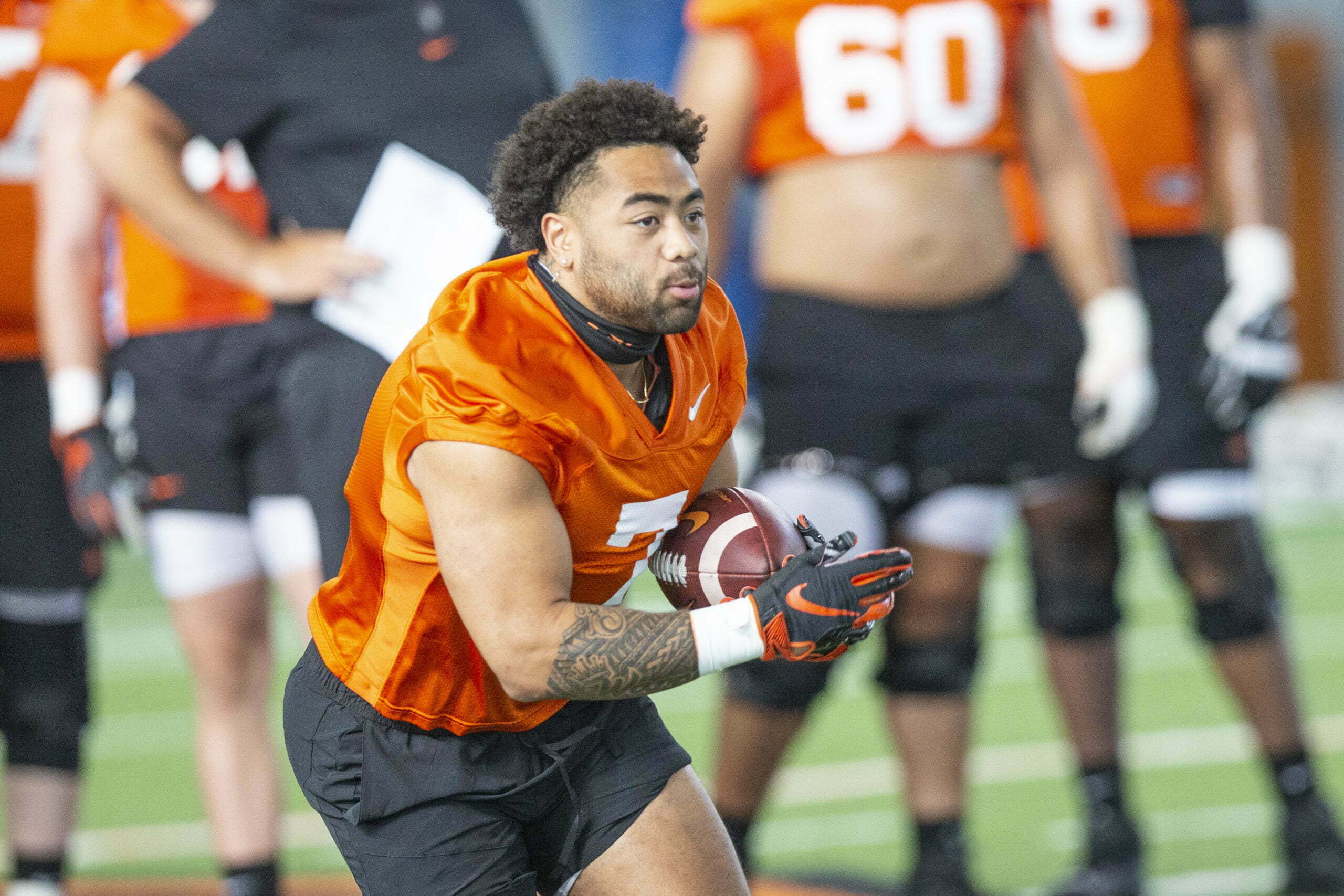 Mike Gundy loves for his Cowboys to run the ball; they just haven’t always been that good at it. But this year, they should be.

Oklahoma State is enjoying a rare mix of experience and depth at the running back position and should be much improved along the offensive line. If both parties can remain relatively healthy, that’s a good recipe for ground-game success.

Last year, the O-line wasn’t so much bitten by the injury bug as it was bled dry by a swarm of injury mosquitoes. And the nation’s leading rusher coming in, Chuba Hubbard, played beat-up and was limited to just seven games.

The result was a good, not great rushing output. The Pokes dropped to fourth in the league in rushing offense (rushing 187.3 yards per game) — after finishing second the previous two years — and turned in their lowest per-carry average (4.06 yards) since 2015.

In the past, Mike Gundy has put forth a target number of 4.5 yards per attempt and 200 yards per game. According to his theory, if OSU gets close to that — with the type of passing game that’s become customary — the Cowboys are a tough offense to game plan for. It’s a sound hypothesis.

You can’t guarantee a team stays healthy, but the Cowboys should be much better-equipped to swat away the bugs in 2021. For one, a full spring camp and summer workouts will work wonders for all positions juxtaposed to the herky-jerky, stop-and-start offseason that the pandemic created.

In the trenches, the Cowboys lost a second round pick in Teven Jenkins but added junior college tackle Caleb Etienne who veteran guard Josh Sills called “the size of a house.” Sills also complimented Etienne for his feet, a powerful punch and his coachability on Friday.

OSU also added touted transfer center Danny Godlevske and returns a slew of youngsters that got a lot less green when thrown into the action early last season. You can see why Gundy said Friday that he was more comfortable with the OL group this year as compared to 2020.

As far as the running backs go, thanks in large part to Chuba being sidelined, Gundy has a stable filled with proven playmakers and enticing newcomers.

OSU got to see breakout performances from the likes of Dezmon Jackson and Dominic Richardson after Chuba and LD Brown went out. Brown took advantage of the NCAA’s COVID eligibility waiver and is back, and then you’ve got transfer buzzworthy Jaylen Warren as well as rookies Jaden Nixon and Zach Middleton. And let’s not forget the dynamic run threat that Spencer Sanders presents to defenses.

Gundy expects to be able to keep his guys fresh by spreading around the rock, which he says will not only help keep his tailbacks healthy in 2021 but moving forward past their time at OSU.

On Friday, Gundy said he doesn’t want any one back taking 25 handoffs in a game and thinks three or four could average 12-15, allowing the Cowboys to stay healthy and practice at full speed.

“People don’t understand if you have one or two backs and one gets banged up a little bit and can’t practice, next week you’re trying to get him ready to play the game,” said Gundy. “Then he’s not getting much work in the first team, and the other guy is getting overworked because you still have to practice in order to get ready play on Saturday because the other 10 guys need somebody in there practicing full speed. So, you set your team back, offensively.

“The guys that we have, they share reps, they stay healthy, they can practice good the next week and it’s better for their body in the long run. We’ve got some guys playing here that can potentially make an NFL roster someday. So, it’s good for them, physically, their career, and it’s good for us, offensively, to keep players healthy.”

Sills, a leader in the trenches, echoed his coach’s sentiment and is looking forward to the same goal.

“That is the best feeling in the world,” said Sills, “when you go into a game and you come out of it with 200, 250 yards rushing and, like Coach Gundy said, you give the ball to three or four different, four or five different guys, and they all have 12-15 touches and rush for 60-70 yards apiece or 100 yards apiece, or that kind of thing. That’s what you live for as an offensive lineman.”