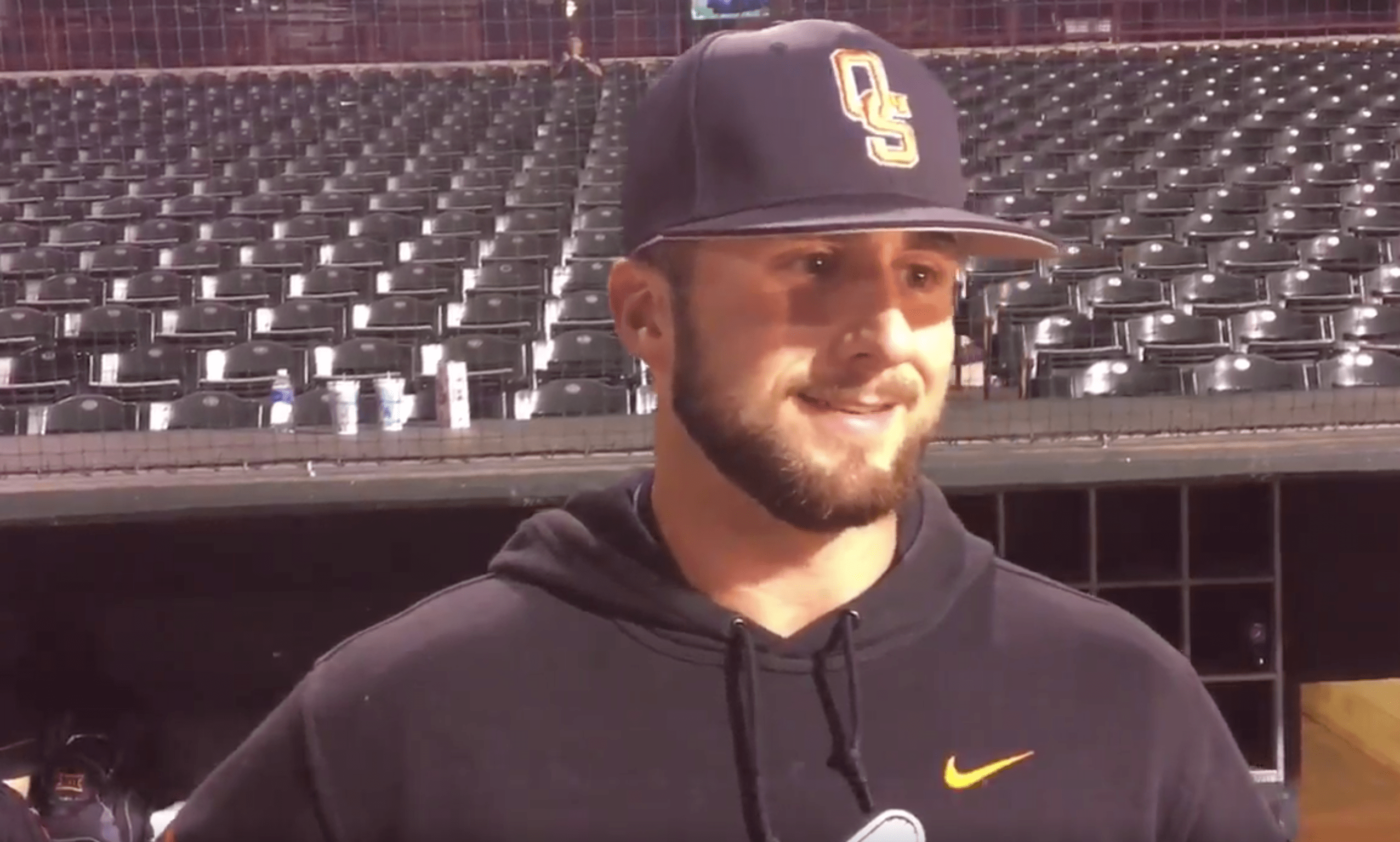 After winning a combined 12 Big 12 Conference games in the previous three months, Oklahoma State and Kansas State combined to win four on Friday and Saturday night. Thankfully for the Cowboys that was enough to get them into the postseason.

After the Wildcats took a doubleheader from Baylor on Friday, OSU knew it needed to win both games of its series against OU (which was shortened due to weather). It took Game 1 9-7 after leading 5-2 in the fifth inning as the game was carried over from Friday night (rain) to Saturday.

Despite a late run by OU which scored three in the bottom of the ninth, the Pokes hung on.

Then OSU scored three in the first inning of the second game in OKC which would turn out to be all they would need as they won 5-2 to “sweep” OU over the rain-shortened two-game series.

The play of the game came in the seventh when Garrett McCain made a diving catch to end the inning and save OSU some runs. McCain also went 2-5 with a triple and two RBI in the second game.

He does it all! @GarrettMcCain flashes the leather on this Web Gem to end B7! #okstate #SCtop10 #Bedlam pic.twitter.com/sxpCGHURtw

Sophomore Joe Lienhard was phenomenal in Game 2 on the mound. He went seven innings, gave up just one run and struck out seven.

“We had a task in front of us today,” said head coach Josh Holliday. “If we wanted to extend our season, we had to go out and beat a very good team twice in a rivalry environment, and we were able to do that. We didn’t have any room for error.

“The way the kids handled themselves today was a huge step for our team, the program in general and the pride in it. To play OU and beat them all three times this year in a season where we’ve had some highs and lows, this is certainly a high. It extends our season into the Big 12 Tournament which was very important to us. The opportunity to go compete in what I think is the best conference tournament in America and try to continue to be that team that finds a way to win.”

Recap, photos and thoughts from some of the #okstate heroes following the Cowboys’ #Bedlam sweep in OKC: https://t.co/AREDQXDff5 pic.twitter.com/PGoP8WI0p9

OSU ends the regular season with a 8-14 Big 12 record to Kansas State’s 8-16 record. The Cowboys had two games canceled due to weather (one against Texas and one against OU), but it also beat KSU 2-1 in its three-game series.

So now they will return to Bricktown next week looking for a miracle.

The Cowboys will get Big 12 champs Texas Tech in Round 1 after Tech and TCU tied for the Big 12 title but Tech took the regular season series. OSU was one of only two Big 12 teams to beat Tech in a series this year. The path for OSU into the NCAAs is basically by winning the entire Big 12 Tournament.

That’s an unlikely outcome given the way this season has gone, but the important thing is that with their backs against the wall at (literally) the 11th hour against their arch-rival, Josh Holliday and Co. stayed alive to fight another day. On some level, that matters. And if OSU puts something special together next week, we could be talking about those two games in Bricktown for a long, long time.