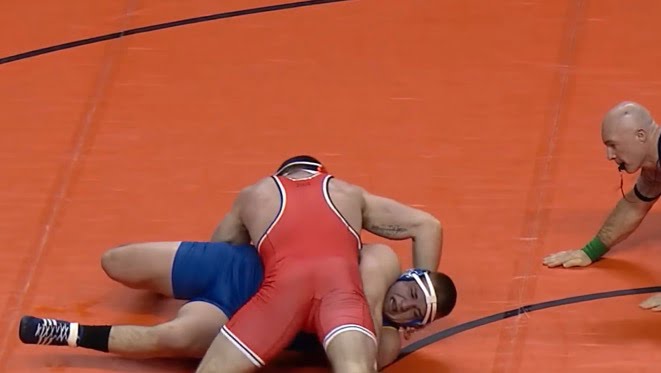 Oklahoma State wrestling will travel to the land of Erie this weekend for a road test on Friday night against No. 24 Edinboro, and follow that dual up with a matchup down the road against Kent State. After a difficult test last weekend against Missouri that cost OSU the top ranking in some polls, the Cowboys are looking to show that they deserve the No. 1 status in the National Wrestling Coaches Association Poll.

At 125-pounds, No. 12 Nick Piccininni will have an opportunity to face No. 10 Sean Russell of Edinboro. Russell defeated Picc in the consolation semi-finals at the Southern Scuffle back in January by a 5-2 decision. While their rankings are about the same as they were then, Picc will be able to show his improvement since that tournament.

No. 2 Anthony Collica will be facing off against No. 9 Pat Lugo of Edinboro at 149 pounds. The two met at the Southern Scuffle, where Collica took the 6-1 decision on his way to the Scuffle Championship. Other ranked matchups for the Edinboro dual will be No. 2 Kaid Brock taking on No. 18 Korbin Myers, No. 5 Chandler Rogers taking on No. 12 Austin Matthews, No. 5 Nolan Boyd taking on No. 16 Dakota Greer, and No. 6 Austin Schafer taking on No. 14 Buddy Miller.

The Edinoboro matchup will be the first time that the Cowboys have traveled to Edinboro, PA, and only the second time in program history that the Cowboys have faced the Fighting Scots. The trip offers six ranked matchups for Cowboy grapplers, which will allow them to prove their ability once more for those making seeding decisions for the NCAA tournament.

The Kent State dual will be the third time that the programs have met and the second time that the Cowboys have visited Kent, Ohio to take on the Golden Flashes. This dual offers no ranked matchups for the Cowboys. Hopefully we will see some bonus point victories and some work from the guys that have been under performing recently.

Lineup depth has been the major talking point all season for the Cowboys with 9 out of 10 wrestlers currently ranked to All-American at the NCAA Championships in March.

Over the last couple of weeks, however, a couple of Cowboys are showing cracks in the armor as No. 6 Joe Smith has been sluggish in his matches, No. 7 Kyle Crutchmer lost to an unranked wrestler at Missouri, and No. 8 Preston Weigel has lost his 50/50 matches. While these three have been struggling to perform to their ranking recently, two Cowboys have been wrestling not just to win their matches, but to dominate their opponents.

No. 12 Nick Piccininni has finished three out of four matches, since his loss to No. 1 Thomas Gilman of Iowa, by technical fall. No. 6 Austin Schafer has finished all of his matches since defeating Iowa’s Sam Stoll by pin fall or major decision. The emergence of Piccininni, Schafer, and Chandler Rogers as guys that can score points will be very valuable for the Cowboys moving forward.

If these three can score bonus points in the first rounds of the NCAA Tournament, and do the same in the consolation brackets should they lose, then the Cowboys will be in good shape in March.