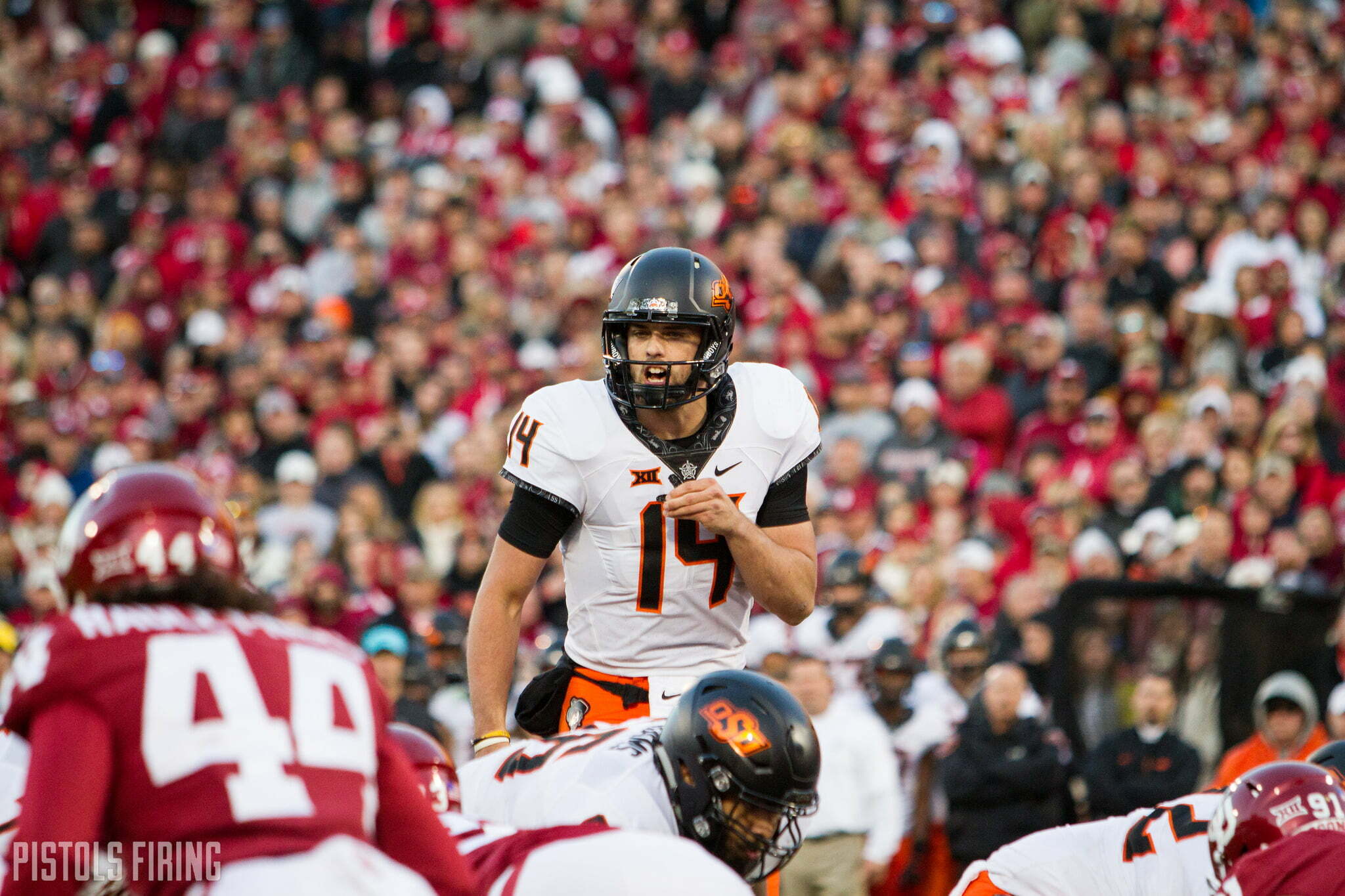 There will be no more wondering if and when a QB change will be made. No more questions on how Mike Gundy won’t use the new redshirt rule. All that’s left to ponder is how (or if) a QB change would have affected OSU’s final record, the type of what if’s that became fan lore.

For his part, the fifth-year senior was tough as hell. He laid it all on the line for his team, and deserves any and all praise he got up to and including his massive Liberty Bowl Player of the Game trophy.

His one year commanding Oklahoma State’s offense was a success statistically. The Cowboys may have not been elite when they had the ball, but the offense was really good and definitely held its own.

OSU was 21st in points per drive heading into the bowl game and finished 13th in scoring offense, 10th in total offense and 10th in passing offense behind Cornelius.

His lone season as QB1 was one of the more productive ever at Oklahoma State. Have a look at where it stands historically.

Corn’s passing total of 3,978 yards edged out Mason Rudolph’s sophomore season. The only four above it were Rudolph’s and Brandon Weeden’s junior and senior campaigns.

His 32 passing TDs this year fall only behind Rudolph’s final year and Weeden’s junior and senior years. His 10 rushing scores gave him 42 total TDs. Here are the only Cowboys to have more in a season:

His total offense beats out all but Rudolph and Weeden’s senior seasons. 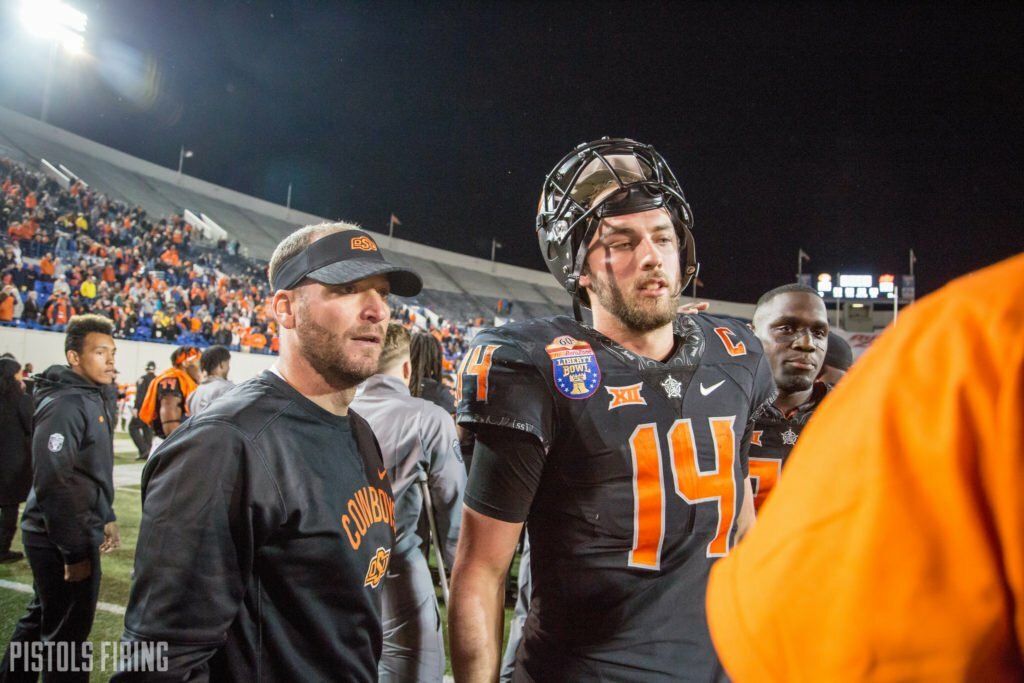 What’s in a Legacy?

The most important stat for any QB is the one decided by the scoreboard when the clock hits zilch, and the way we view Cornelius’ tenure will always be shaped by his team’s displeasing 7-6 finish. His success, fair or not, will be measured against his predecessor Mason Rudolph and the 10-win machine that he helped captain over three-plus years.

In college football there is no preseason. Every snap counts. And in a 13-game career, people don’t forget your first game. That’s something that I think is easy to forget when summing up Cornelius’ time at OSU. Mike Gundy has said on more than one occasion that it takes more than a year for a QB to figure it out. Cornelius didn’t have that long.

As an aside: One thing I think will take from this year is how Mike Gundy and those involved in the decision-making process changed the way they handle quarterbacks from how they’ve often done it historically.

For a year leading in with so many questions (and options) behind center, OSU stood pat. Other than Keondre Wudtee’s mop-up duties against South Bama and an FCS team, no other OSU quarterback saw the field until Dru Brown was forced into “action” when Cornelius lost his lid in the bowl game. Brown played one snap.

Compare that to what we’ve seen in the past. Clint Chelf didn’t last a quarter after being named the starter ahead of 2013. In fact, between the two best QBs to ever don an orange lid, Weeden and Rudolph, OSU was a non-stop QB carousel.

Will this newfound stability be the norm in Stillwater? Or was it just a perfect storm of age, affinity for walk-ons and aversion to “snowflakes”?

Back to Cornelius and his winning finish to get OSU on the right side of .500 on New Year’s Eve. Those four passing TDs tied a Liberty Bowl record.

“I mean it’s a great feeling just to go out on top,” said Cornelius after the game. “As long as we get the win, that’s all that matters to me. I don’t care about the records.”

But it wasn’t a perfect outing — maybe it was a perfect Cornelius outing — when you look at the two interceptions he threw that the Tigers turned into 14 points, pushing the Cowboys in a game that should have been all but buttoned up midway through the final period.

Again, maybe that’s a fitting ending to Corn’s career. He did all he could to facilitate the rout of a ranked Missouri team, before doing all he could to make things interesting. Finally, he had to depend on his maligned defense to come up with a couple of huge plays to save the day.

Mike Scott blocked what would have been the go-ahead field goal by the Tigers and Kolby Peel made game-saving play on what could have been a go-ahead touchdown.

Cornelius will be likely remembered by fans and outsiders alike just as much for his interceptions, head-scratching taken sacks and a missed 2-point attempt. And that’s okay. That’s part of the job of a quarterback. All eyes are on you — and normally all of the blame, too.

There was a seemingly growing contingent of fans (or more likely a loud minority of commenters) who took any criticism of a questionable decision, or interception in the end zone, as a personal attack on the former walk-on. Those who wanted him embraced as QB1, didn’t want him to be held to the standard of a starter.

I personally love his story and rooted for the guy, but that doesn’t make a bad play not a bad play. It’s one of the more interesting specific situations I’ve noticed from OSU’s fanbase in my nearly 30 years of following the team.

Just ask Chuba Hubbard, who will be taking handoffs from a brand new QB starting next spring. He looked ready to go to blows for his leader and teammate.

“Everyone that interviews us from Oklahoma State knows that I love Corn and have always supported him and obviously he’s got some hate and stuff but I always supported him,” said Hubbard. “He’s a great guy on and off the field and I wish I could back him up, say some stuff back to the people that hate on him.

“But, yeah he’s awesome. I think everyone on the team knows that. And I’m really lucky to be able to run behind him and block for him and stuff. So, yeah. He’s an awesome guy and I’m really happy to have him as my QB.”

I don’t think you could ask for a better commendation from a teammate. So, as fans, let’s remember Corn for what he was. He played his heart out. He handled himself admirably amidst the type of pressure few of us will ever know. He was blue-collar, a Cowboy through-and-through.

And most of all, let’s remember him for what he ultimately became: a pretty good quarterback.