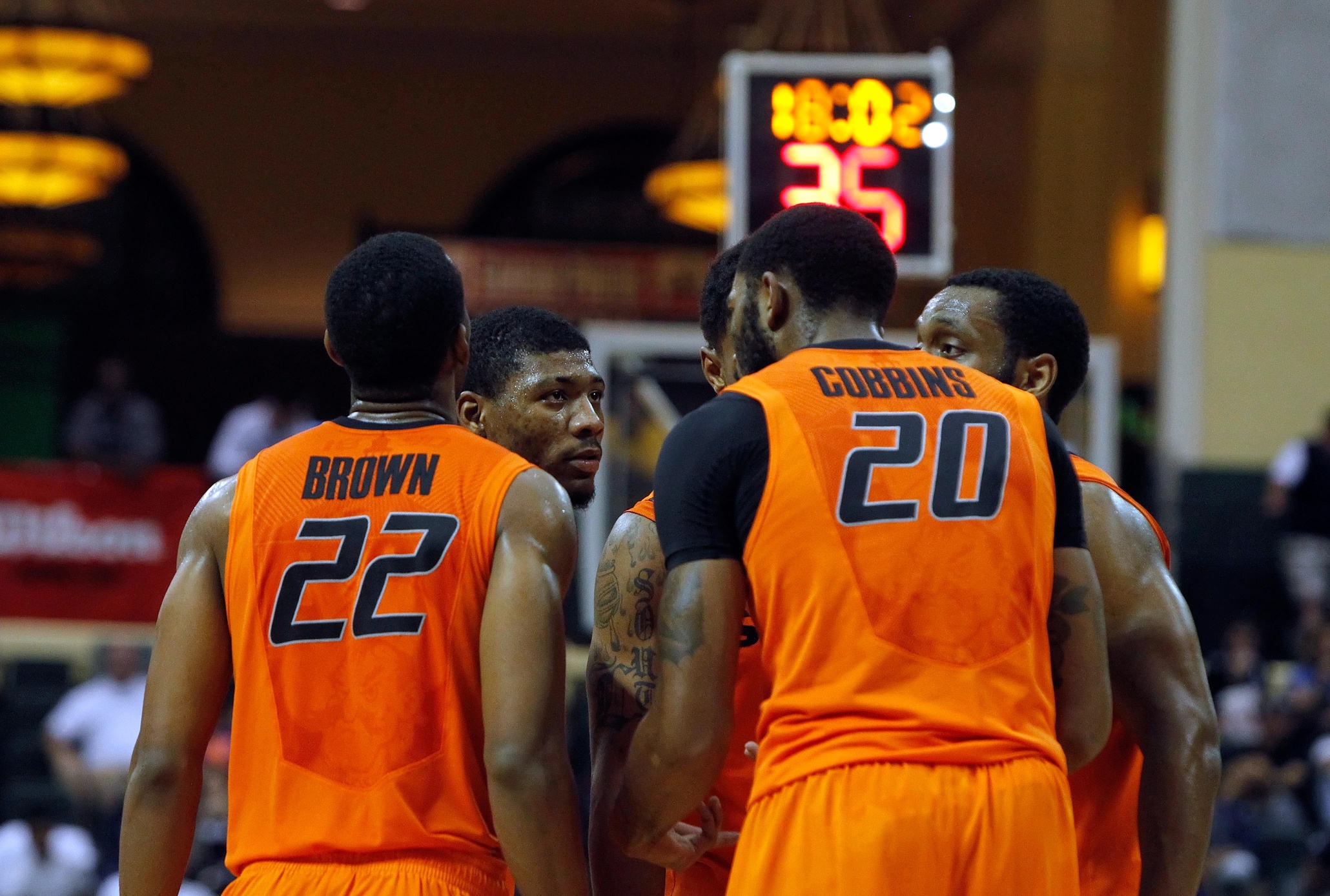 I have no idea, really.

I keep trying to talk myself into Marcus and Markel and Nash carrying this team to a Big 12 title. I keep thinking maybe Murphy will evolve into a middle class man’s Fred Jonzen or maybe Soucek can trade bodies with Dirk for a few months or…something.

But I’m afraid the Big 12 title hopes OSU had this season will be cut open and laid to rest with the incision on the back of Michael Cobbins’ heel on Thursday morning.

The problem isn’t replacing his 5 points, 4 boards, and 2 blocks a game — that’s actually the easiest part (though it’s not all that easy). Many of you have reminded me that we shouldn’t act like Cobbins is I-Mac circa 2004 and you’re right, but he was valuable in ways you can’t measure.

He was OSU’s only rim-protector, literally its only viable inside presence on defense. You can have his offense, I don’t care about it, that’s not what this team will miss.[1. Though I will miss all those tip-dunks. So many tip-dunks.] He’s not the engine that makes this thing go on offense but his importance on defense (and this team is built on defense) is going to be easier to measure over the next 18 games than it was over the last 13.

And that’s not a good thing.

The problem is really two-fold.

Problem No. 1: OSU’s big men are now Kamari Murphy, Marek Soucek, Gary Gaskins, and Mason Cox. Like, if you get on okstate.com those are the only guys on the roster listed as “posts.” So my question to those of you who keep throwing Junkyard Dog references at me is “what happens when Murphy gets in foul trouble?” We just gonna roll Mason Cox out there against Joel Embiid and pray?[1. No offense, Mason, if you’re reading this.]

Speaking of foul trouble, Murphy has played 33 games in his career of 15 or more minutes. In nine of those he committed four or five fouls. And he wasn’t even guarding the other team’s main big man!

Problem No. 2: The three biggest threats to OSU winning the Big 12 are Kansas, Baylor, and Iowa State. Kansas has Tarik Black and Joel Embiid who, if you haven’t noticed are very tall and very, very good. Baylor has Cory Jefferson and Isaiah Austin who are both of those things as well. Iowa State doesn’t have a super-big but they have a fleet of 6-6 and 6-7 guys that are going to be a terror.

And we’re throwing Kamari Murphy, Gary Gaskins, and (I guess) Le’Bryan Nash at these dudes?

Nolo texted me yesterday and said “Joel Embiid is going to score 100 points on us and high-five the picture of Wilt on the way back to their locker room.”

Same for Jefferson except it’s going to be a photo of LaceDarius Dunn.

I think this is what I would do if I was Ford (because Murphy isn’t the answer to these problems, I promise).[1. And I like Murphy a lot.]

Start Stevie at the point, move Smart to the two, Markel at the three, Brian Williams at the four, and move Nash to the five. That’s about as small a lineup as you’re going to find on a top 25 team but it’s super athletic, too. Press early, go fast at teams in the first half and then filter in Murphy later on and use all 10 of Soucek and Gaskins’ fouls late.

I love Stevie and Marcus playing together and that team is really fun, if not vastly undersized, on defense.

I don’t know if that plan works — you can probably just play it straight up against the TCUs and West Virginias of the world, but beating those teams doesn’t win you Big 12 titles. Maybe Nash can transform himself into David West, who knows.

There are comps for a Big 12 title winner without an elite big guy. Two of them, actually.

I looked back over the past 10 seasons of Big 12 title winners (so, I looked at Kansas’ rosters and a few others) to try and find a team that won the Big 12 without a legit rebounding, shot-blocking big man and I found 2006 Kansas and 2013 Kansas State.

Every other Big 12 title-winning team (or title-sharing team) in the last 10 years has had a legit big man.

Cole Aldrich, the Morris’, Withey, Simien, Thomas Robinson, et al for KU. 2008 Texas (which also shared the title) had Atchley and Damion James. 2005 OU had Taj Gray and Kevin Bookout. And 2004 OSU had McFarlin and the Grahams. Not that Cobbins is in the league of any of those guys, but he’s the closest thing OSU has (had).

There is a silver lining in all of this.

Let’s say OSU slips to a No. 3 or No. 4 seed in the tournament and draws a guard-heavy region with very few superior big men, I’ll put Marcus and Markel against anybody in the country in March. I wrote yesterday that OSU’s Final Four hopes were over but after thinking about it for a while I don’t totally think that’s true.

What do we see every March? Guards getting teams to Final Fours.

That’ll play in March, I’m just not sure it will over the next two months in the Big 12 conference.