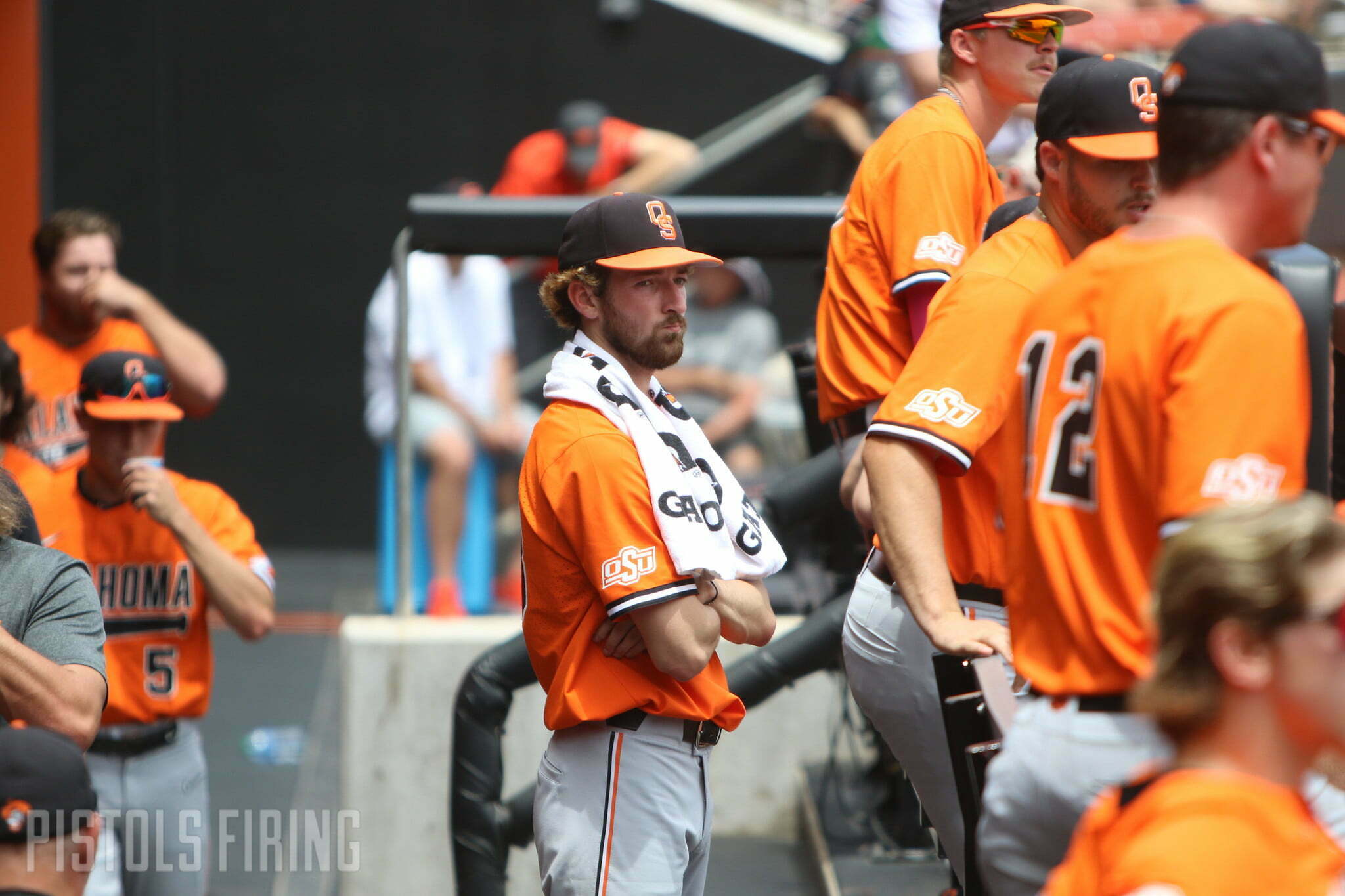 A long, hard-fought weekend ends with a Cowboy loss.

No. 7 Oklahoma State fell to Arkansas 7-3 in the Stillwater Regional Final. The Cowboys fought through to the end, but missed opportunities — and a stellar defensive performance by the Razorbacks — were just too much to overcome.

After a record-setting runfest in the first three days of the Stillwater Regional, the Cowboys and Razorbacks gave the scoreboard a bit of a break in Monday’s Regional Final.

Arkansas took a 4-0 lead in the fourth. Both teams scored a run in the sixth, and Oklahoma State clawed back into it with a two-run seventh before succumbing to the Hogs and a pair of Arkansas runs in the ninth.

The Cowboys left 10 batters stranded on Monday. Twice they loaded the bases and twice they came up empty-handed. Four of Arkansas’ five runs came with two outs.

The Cowboys had a chance to build an early lead. With bases loaded with two outs in the bottom of the second, Chase Adkison chopped one into the infield but Arkansas third baseman Cayden Wallace made an athletic barehand play to first to keep the Cowboys off of the board.

An inning later, Jake Thompson’s single through the gap put runners on first and second with one out, but Arkansas first baseman Peyton Stovall made a pair of eye-popping plays to get out unscathed and strand two Pokes.

Those missed opportunities stung even worse in the next inning when Arkansas DH Brady Slavens nailed a leadoff solo home run to get on the board.

OSU starter Ryan Bogusz then walked Michael Turner and then hit Chris Lanzilli on an 0-2 count, his first of two worn pitches on the night. Both scored thanks to a Jalen Battles single to make it 3-0. Then Stovall’s single sent Battles across the plate. Then Arkansas added a fifth run in the sixth.

The Cowboys finally got on the board in the sixth thanks to David Mendham’s solo moonshot over the right field fence.

The seventh inning started with consecutive singles by Trenkle and Adkison, bringing up Roc Riggio. Continuing a white hot Regional, the freshman hammered one off the right-field warning track for a ground-rule RBI double to make it 5-2.

Next up, Riggio’s fellow freshman, Zach Ehrhard scored Adkison on a line out to make it 5-3. Jake Thompson grounded out, bringing up Doersching to the plate representing the tying run. The big man drilled one to centerfield, but it was not quite enough and he flied out to end the seventh.

Justin Campbell kept the Hogs at bay in the top of the eighth. A Mendham leadoff single followed by a McLean hit-by-pitch to the calf, put two Cowboys on. McLean was thrown out at second on a fielder’s choice. He might have made it had he slid. A Brett Brown walk sent Chase Adkison to the plate with bases loaded once again. But he and then Riggio were each struck out swinging by freshman pitcher Hagen Smith.

Bogusz started in back-to-back days, but there were no fresh arms at this point in the Regional. It was all arms on deck for the elimination game.

In the first three innings, Bogusz was nails, striking out five Hogs. He also made this athletic play to get his first out of the third.

But a four-run fourth inning brought Hueston Morrill to the mound. Morrill lasted just one-third of an inning, giving up a walk. Then Victor Mederos came on and pitched three innings, striking out five and allowing just two hits and one run.

After Mederos hit Chris Lanzilli with the first pitch of the eighth inning, Rob Walton called on his ace, Justin Campbell. Campbell had allowed five runs in five innings in a start in the Cowboys’ 20-12 loss to Arkansas on Saturday. He struck out four, allowing three hits and two runs.

A Brayden Webb double skipped right past a recently dinged McLean. After a questionable ball called by the ump that looked to have been his second strike, Michael Turner rocked a line drive to right field. Zach Ehrhard went down, unable to stop the ball. It added two more to the Razorback’s total.

Haggen Smith hammered the last three nails in the Cowboys’ coffin with a flyout of Ehrard, and strikeouts of Thompson and Doersching in their final college at-bats. But Doersching fought to the end, battling through nine pitches before being struck out looking for the Cowboys’ final out.

With the loss, the Cowboys’ season ends with a 42-22 record. Arkansas will face No. 10 North Carolina at the Chapel Hill Super Regional.