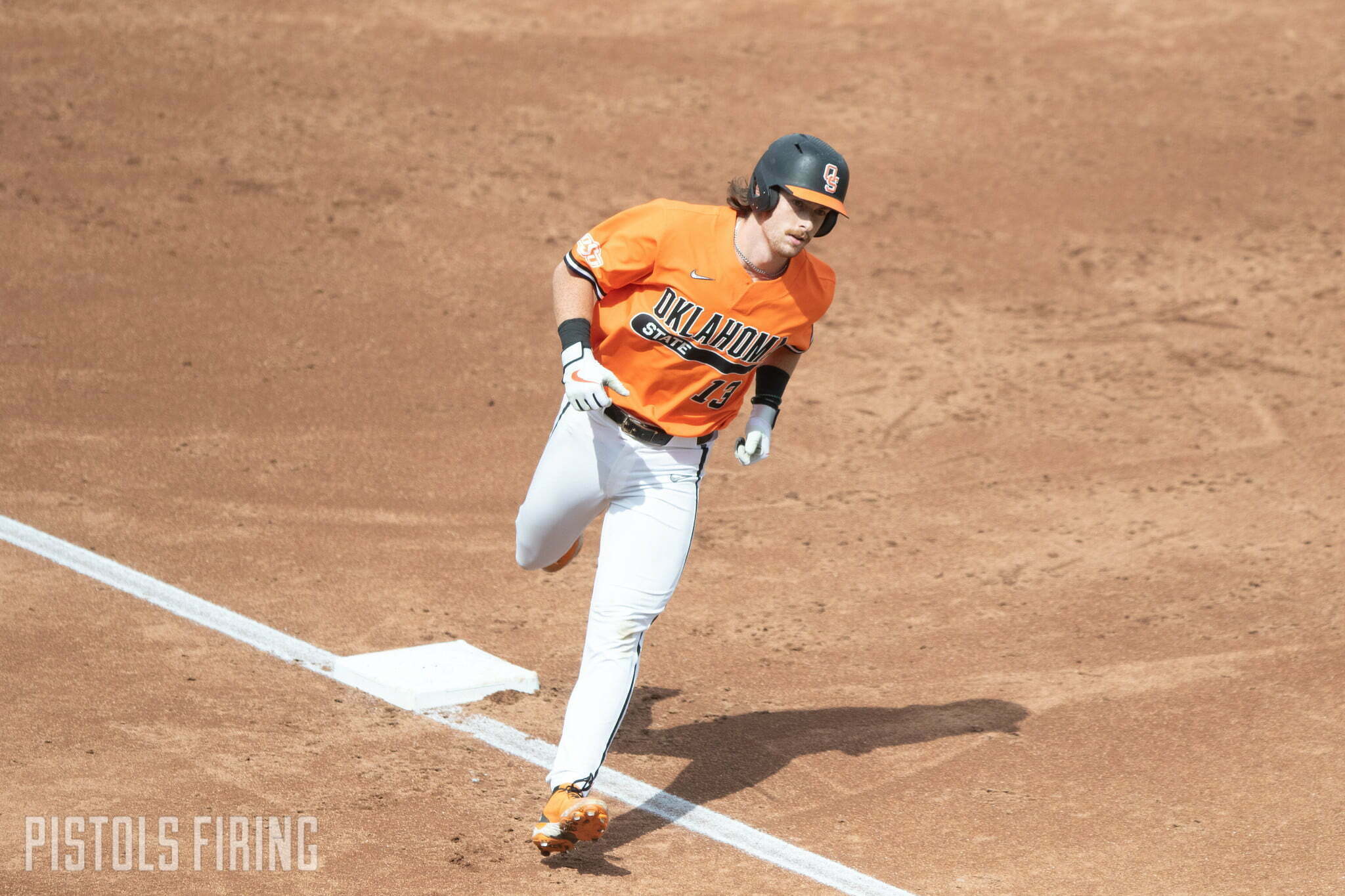 The Bears took a 3-0 lead in the top of the first and it took the Cowboys all the way until the seventh inning to catch up. The Pokes blew the game open in the eighth. Then Mother Nature put a stop to things with the Cowboys on top.

No. 8 Oklahoma State earned the series win over Baylor with a 9-5 decision to spoil the Bears’ Senior Day.

Nolan McLean went 3-for-5 with two RBIs and finished the game on the mound, though his final few pitches didn’t count. Jake Thompson also went 3-5, with his own score.

The Bears struck first, scoring on back-to-back Trevor Martin pitches when Kyle Nevin and Antonio Valdez each had an RBI single. The next Baylor batter to the plate, Cam Caley, singled to left center to make it 3-0.

The Cowboys finally got on the board in the top of the third thanks to consecutive walks by Baylor pitcher Anderson Needham.

Roc Riggio singled to right first and Thompson singled up the middle before Griffin Doersching was walked to load the bases with two outs. David Mendham went eight pitches before getting his fourth ball to send Riggio across the plate to make it 3-1, but Nolan McLean’s strikeout stranded three Cowboys. Stranded Cowpokes became a trend on Saturday in Waco.

Fresh off of his 3-for-4, two-running outing on Friday, Zach Ehrhard homered over the left field wall in the fifth to pull OSU within one run. He went 2-for-5 and scored three runs.

The Pokes loaded the bases again in the sixth, this time with one out but Chase Adkison flied out to left field and the other Cowboys had to hold. Ehrhard then got another chance to play hero but he flied out, stranding three more Pokes.

The Cowboys had three runners on base again in the seventh inning, but this time they were able to get three runs out of it.

Baylor pitcher Matt Voelker extended to field David Mendham’s single cleanly but then stumbled and rolled in the infield allowing OSU to load the bases for the third time. Enter Nolan McLean.

Lucky 13 stepped to the plate and hammered one down the left field line to score Doersching and Riggio. Mendham crossed the bag himself on a Marcus Brown groundout.

Self-inflicted wounds killed the Bears, especially in the eighth. A two-run Cowboy lead turned into a six-run chasm.

A wild pitch by Baylor’s Adam Muirhead not only walked Doresching, it shot past the Baylor catcher Harrison Caley allowing Ehrhard to score. Muirhead followed that up with a balk that scored Thompson. Then Baylor’s Kyle Nevin tried to backhand a catch at first base but missed it allowing Doersching to score. To add insult to that injury, McLean added another RBI to cap a four-run eighth inning and retire Muirhead.

Mitchell Stone had retired 12-straight Baylor batters before Jack Pineda led off the Bears’ eighth inning with a homerun. After following that up with his first walk of the day, Stone left the mound but he left it to a standing ovation by those OSU fans that made the trip to Waco. He moved to 2-0 on the season.

After Trevor Martin gave up those three runs in the first, Stone started the second and pitched his longest outing of the season and, no-doubt, his best. The lefthander from Edmond pitched six and a third innings and was dominant for the first six of them, striking out five and allowing just two hits and no runs.

Roman Phansalkar came in for a third of an inning and gave up a score before Nolan McLean moved from third base to the bump and pitched the rest of the way, allowing officially no runs and pitching one third of an inning. But his arm will have more wear than the box score shows when the Cowboys head to Arlington next week.

The Cowboys had scored two more in the ninth on an Aidan Meola single to extend the lead to 11-5. Baylor scored in the bottom of the ninth to pull within 11-6. Then, with just two outs to go, a lightning strike in the area caused a delay. There were Bears on first and second.

After a half-hour delay, and with more weather potentially coming, it was decided that those ninth inning scores would be nullified and that this one would be limited to eight innings. So the score went from 11-6, back to 9-5. Either way, the Cowboys take the series and end the regular season on a two-game win streak.

With the win, Oklahoma State moves to 36-18 on the season and 15-9 in Big 12 play. Next up, the Cowboys head to Arlington for the Big 12 Tournament. In a three-way tie for second, tie-breaker rules dictate that the Cowboys fall behind both Texas Tech and Oklahoma. The conference tourney starts Wednesday.