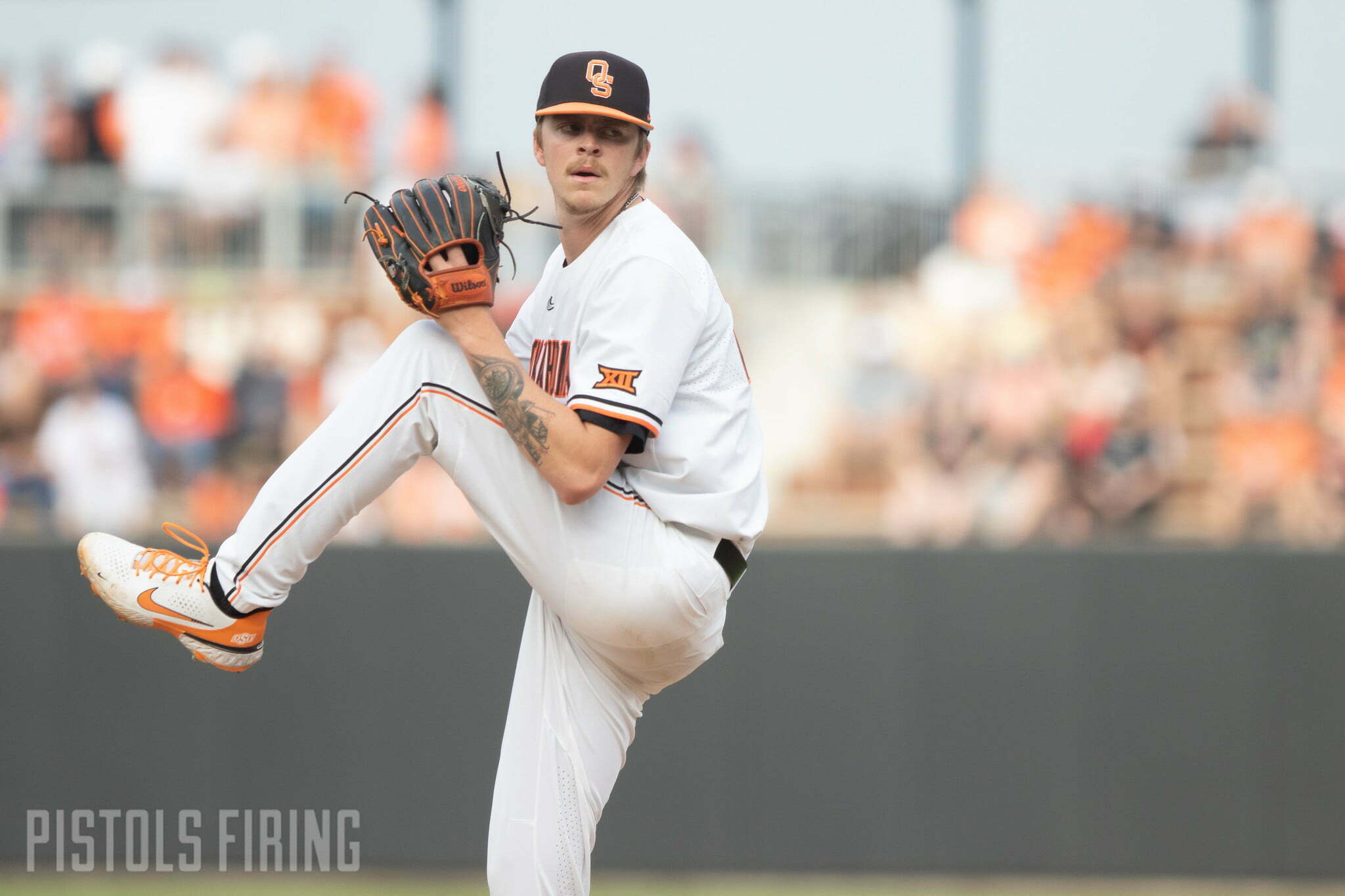 STILLWATER — Every time Mike Gundy has thrown a pitch at O’Brate Stadium, the Cowboys have won by double-digit runs.

Oklahoma State pulverized TCU 13-2 on Friday in the teams’ series opener thanks to an All-American pitcher and a big night from the Cowboys’ big bats. In a night OSU football coach Mike Gundy threw out a ceremonial first pitch, the Pokes hit three home runs and starting pitcher Justin Campbell struck out a 14 batters, which tied a career high.

OSU third baseman Nolan McLean has struggled with strikeouts this season, but he had himself a day against the Horned Frogs, going 4-for-5 at the plate with a home run and four RBIs. McLean’s longball, his ninth of the season, came in the third and was a three-run shot.

That third frame started with Griffin Doersching hitting the world’s strangest base hit. He hit a ball high into the Oklahoma sky along the first-base line. TCU pitcher Riley Cornelio and first baseman David Bishop didn’t communicate with each other and collided. The ball landed just fair, and Doersching gleefully darted across first. Doersching advanced to second on a Marcus Brown single before McLean’s shot to left center made it 6-0 Pokes.

“I know what I am as a player,” McLean said. “I believe in who I am and what I’ve done up to this point, but I mean hits are fun to get. They’re hard enough to get in the game of baseball, so when you have nights like tonight, it’s really fun.”

The Pokes added two more home runs in their four-run fourth inning. Jake Thompson’s solo shot bonked off the batter’s eye center was his seventh round-tripper of the season.

Then Griffin Doersching got ahold of one. It probably wasn’t as impressive as the 500-footer earlier in the month, but it landed on the building beyond the stands in left center before bouncing its way into the outfield parking lot. It was his fourth home run of the season and third in the month of April.

“If you guys ever want to see something fun, come watch [Doersching] take batting practice — it’s fun,” OSU coach Josh Holliday said. “His strength is next level. It’s the kind of strength that my brother (Matt Holliday) had back when my brother was in his prime. It’s that kind of strength. The guy hitting the baseball, and you’re going, ‘Wow, that’s different.’ He’s a strong man, strong man.”

The first four innings were a little peculiar. The Cowboys scored one in the first, two in the second, three in the third and four in the fourth. That finally ended when they put up only two in the fifth.

Campbell didn’t need a ton of run support. McLean said “it’s pretty boring” playing behind Campbell when he is as locked in as he was Friday. McLean had one put-out Friday. Most of his action came when catcher Chase Adkison threw it around the horn after Campbell struck someone out.

“Usually as I pitch, I progressively get better as the game goes on,” Campbell said. “I learned that I was able to do that senior year of high school. I think it really helps me become a better pitcher in my mind. … I kind of pace through the first three and after that I’ll give them a pretty ugly day at the plate.”

Although Campbell was the Pokes’ starting pitcher, he didn’t throw the first pitch of the day. That honor went to Gundy, whose ball clocked in at 51 MPH as it went across the plate to Holliday, the acting catcher.

“Big fan of coach Gundy,” Holliday said. “Good to have him down here. He played a little baseball in the fall of ’86. Before he became Mike Gundy, our quarterback, he was Mike Gundy, a two-sport athlete at Oklahoma State. Heck of a good baseball player.”

OSU continues its conference series with the Horned Frogs at 2 p.m. Saturday in O’Brate Stadium.