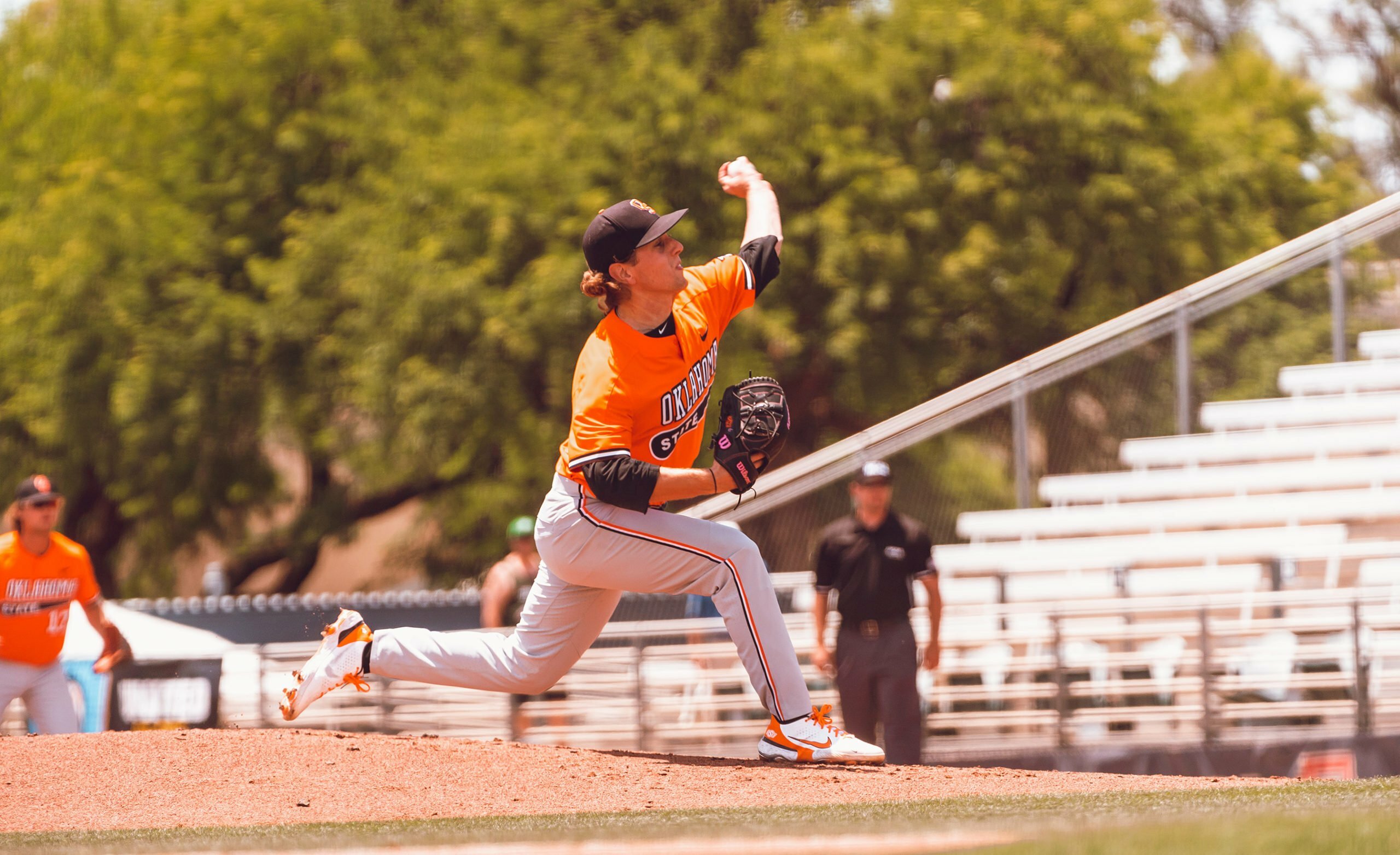 After allowing 14 runs to U.C. Santa Barbara in the a blowout loss on Friday, OSU was strong from the mound on Saturday and that started with the Cowboys’ lefty.

“Obviously, we played bad yesterday but turned things around,” Scott said in a postgame interview. “Hopefully, we’ll catch a spark.”

Scott has seen the Antelopes before, earning OSU’s third win of the season against GCU. His college debut back in 2017 was against Grand Canyon when he worked a scoreless inning and struck out two.

He was asked on the broadcast if familiarity with the Antelopes’ rotation helped him. He said that the familiarity advantage works both ways.

“I just kinda stuck to what I go to,” Scott said.

OSU’s bullpen came to play on Saturday, as well. Kale Davis pitched one and two-thirds innings allowing no hits and striking one out. He turned in a 1-2-3 eighth. Then, needing three outs to stay alive in the postseason, OSU went to its closer Brett Standlee, and he did the same picking up his fifth save of the season.

The Cowboys only scored one more run than in their loss Friday, but it seemed like a completely different offensive performance.

OSU struck first and never gave up their lead after playing behind the entirety of their loss to UCSB.

Marcus Brown’s RBI single put the Cowboys on the board in the second, and Cade Cabiness scored on his 10th home run of the year in the top of the fourth.

They say baseball is a game of inches and one of those inches made the difference between a SportsCenter Top 10 play and an unearned run.

In the bottom of the fourth, Grand Canyon got on the board on a would-be 4-3 unassisted double play by Marcus Brown. Unfortunately, it turned into a run by error when Jake Thompson couldn’t secure a catchable throw to first base.

An inning later, the Cowboys would score on a throwing error themselves. This one might have been three inches off.

GCU starting pitcher Dawson McCarville subbed out and left OSU runners at first and second with one out. His successor Carson Markl walked Jake Thompson in four pitches to load the bases, and the Cowboys’ big man paid it off.

Carson McCusker’s RBI pushed the lead to 3-1, and he reached on a fielder’s choice. McCusker went 2-for-5 with that RBI. In the same inning, a GCU throwing error to third opened the door for Christian Encarnacion-Strand to score and put the Pokes up 4-1.

As docile as you might think Antelopes are, they put still put up a fight and never let the Cowboys get out of striking distance.

GCU’s Jacob Wilson scored on a solo home run in the bottom of the sixth to pull within 4-2. And remember the would-be double play? Jake Thompson redeemed his miss with this diving grab with a runner on third to end the inning and save a run.

The Antelopes got into a jam in the second, but a normal starter stepped to the mound and kept the Cowboys from blowing this thing open.

In the top of the seventh two Cowboys took a baseball to the shoulder giving the Cowboys two on with no outs. Facing a long summer, GCU brought in starter Carter Young, and he pitched his way out of the hole masterfully.

After walking Encarnacion-Strand on a full count, the Cowboys had the bases loaded. But Young struck out Thompson and McCusker swinging, and Cabiness flied out to right field to strand three orange runners.

In the top of the eighth, Nolan McLean hit his first home run in nearly two months, and it was a big one to take back some of the momentum GCU had gained in the seventh and was the final run scored in the game.

The Cowboys have kept the umpires on their toes this weekend. The broadcast crew made mention that the rolling count on reviews for the Tucson Regional is seven. Six of those (three each) occurred in the Cowboys’ two games. Three of the six went in OSU’s favor for those keeping score at home, including McLean’s dinger off the right field wall.

With the win the Cowboys will play Sunday at 2 p.m. against the loser of Saturday night’s matchup between Arizona and U.C.-Santa Barbara.