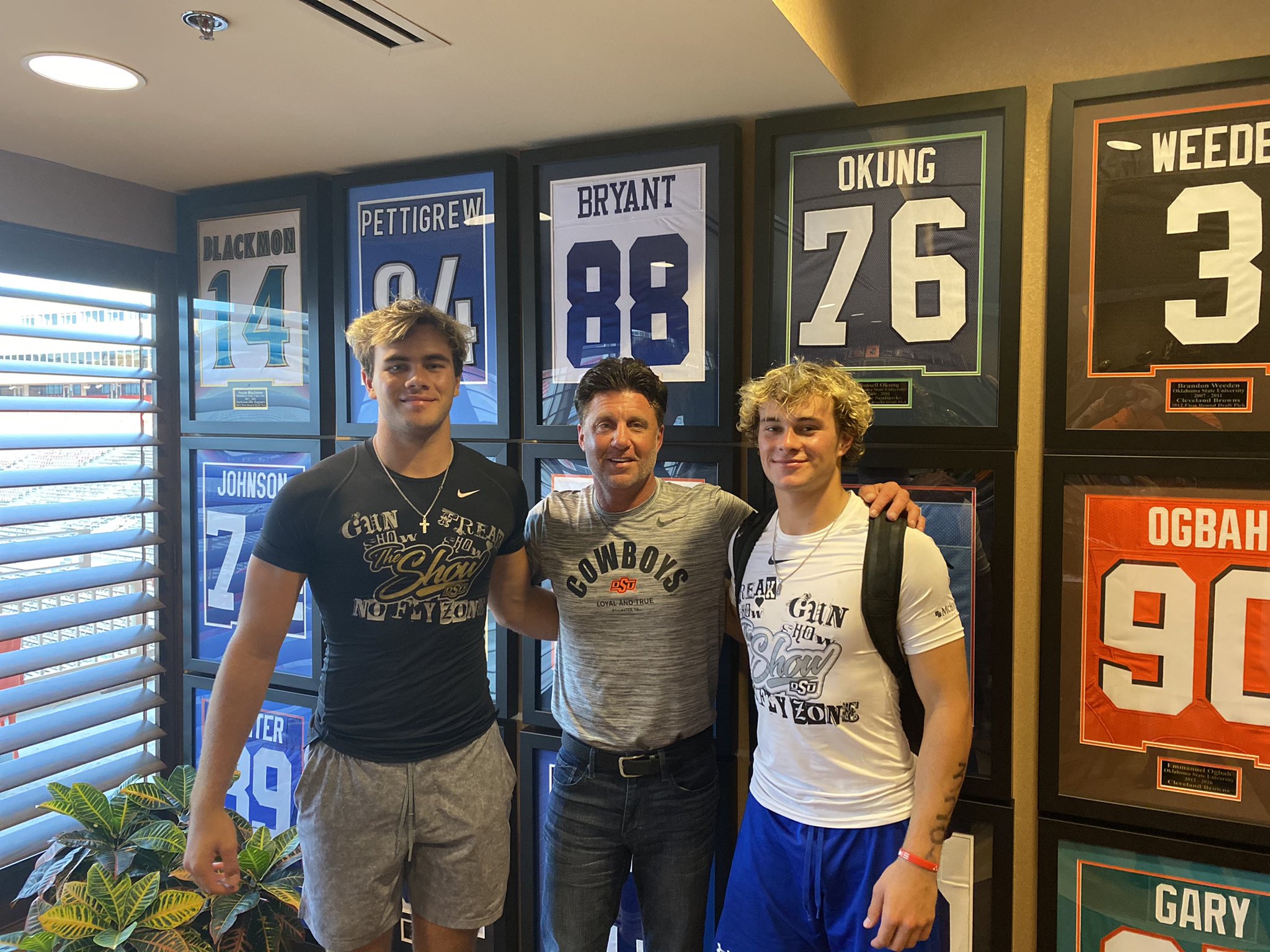 It was a big week on OSU’s campus as prospects from all sorts of age groups came into town for camps.

OSU held a mini camp Sunday, a passing camp Monday and a line camp Tuesday. Then the last half of this week is big for official visits with a healthy chunk of OSU’s 2022 commits coming to Stillwater.

Given the delights of social media, a lot of prospects in town for camps made their presences known. Here are some of the guys who OSU’s staff got a close-up look at this week.

#Jordan Crook, LB, Duncanville (TX): Crook committed to OSU on March 9, and he is set to have his official visit this week. He is the No. 543 player in the class, making him the Cowboys’ top defensive commit in the cycle thus far.

#Mason Gilkey, WR, Pawhuska (OK): Gilkey got an OSU offer Feb. 10 and committed the same day. He is also set to visit this weekend after attending the passing camp. A 6-foot-4, 185-pound pass-catcher, Gilkey is the No. 564 player in the class. He won state championships in the 400m and 200m this year, as well.

*Jaleel Johnson, DE, Oklahoma City: An apparent standout of the lineman camp Tuesday, Johnson was offered shortly thereafter. He is a 6-4, 235-pound defensive lineman who is unranked, but he already had offers from Baylor, Kansas State, Texas Tech, Iowa State, Memphis, SMU, North Texas, Tulane and others.

Jocelyn Malaska, CB, Bethany (OK): Malaska has seven offers from Kansas, Tulsa, Utah State, UTSA, Eastern Michigan, South Dakota State and Abilene Christian. He is the No. 802 prospect in the 2022 class and the No. 13 player from Oklahoma. With corner Avyonne Jones decommitting last month, Malaska could be in line to fill that vacated spot.

Carson May, QB, Jones (OK): May is the No. 17 prospect from Oklahoma in his class. He holds offers from Western Michigan and Old Dominion and has been getting looks from a handful of Power Five programs.

Miller McCrumby, WR, Mount Pleasant (TX): An elite name, McCrumby has an enticing big-bodied pass-catcher at 6 foot 4, 205 pounds. He is the No. 457 player in the 2022 rankings, but his offers don’t necessarily reflect that. His only Power Five Offer is Kansas, but he has offers from Colorado State, Houston Baptist, Lamar, Louisiana and New Mexico.

Zion Steptoe, WR, Frisco (TX): Steptoe is a three-star recruit who plays his high school ball at Frisco-Memorial. He is the No. 1,070 player in the 2022 class and has offers from Purdue, Utah, Vanderbilt, Pitt, Kansas, Kentucky, Hawaii and others.

Jordyn Tyson, WR, Frisco (TX): Another Frisco standout, this one playing his high school ball at Independence, Tyson is unranked in the 2022 class. However, he does have offers from Tulsa, Colorado State, New Mexico, Texas State and Campbell.

Jacob Waller, OL, Arlington (TX): A 6-foot-5, 280-pound O-lineman, Waller already has a good chunk of offers, but he hasn’t quite broken into Power Five space yet. SMU, North Texas, Tulsa, Louisiana, Wyoming and others have offered. He is a three-star prospect, per 247Sports.

Cole Adams, WR, Owasso (OK): An in-state prospect who is starting to catch some attention, Adams has offers from Iowa State, Tulsa and New Mexico. He is listed at 5-10, 180 pounds.

*Bo Edmundson, QB, Austin (TX): OSU offered Edmundson back in February. As things stand, he is a three-star recruit from the quarterback factory that is Lake Travis High School. He is listed at 6-2, 195 pounds and also has offers from SMU, Michigan State, Kentucky, Penn State, Purdue and others.

Anthony Evans, WR, Converse (TX): Despite having just finished his sophomore year of high school, Evans already has Power Five offers from Arkansas, TCU and Iowa State. He also has offers from Houston, Liberty, Memphis, Arkansas State and UTSA. At 5-10, 160 pounds, he is a three-star prospect.

*Jaedon Foreman, DL, Del City (OK): Foreman stood out enough at OSU’s mini camp Sunday to pick up an OSU offer. He also has an offer from Memphis.

*Kam Franklin, S, Oak Grove (LA): OSU offered Franklin, a 6-3, 185-pound safety, at the beginning of May, and he promptly made it out to Stillwater. He is a three-star prospect for now, but his stock will likely only rise with the amount of Power Five programs that already have eyes on him. He also has offers from LSU, TCU, Tennessee, SMU, Mississippi State and Louisiana Tech.

Gage Gundy, QB, Stillwater (OK): The youngest child of OSU coach Mike Gundy, Gage is a 6-foot-3, 205-pound quarterback for Stillwater High. He is also a celebrated baseball player for the Pioneers.

*Mikal Harrison-Pilot, WR, Temple (TX): Harrison-Pilot picked up an OSU offer Monday. He is the No. 128 player in the 2023 class and a four-star recruit. He also has offers from Arkansas, Baylor, Florida State, Oregon, Notre Dame, Miami, TCU, Tennessee, Texas and others.

Dylan Hasz, WR, Bixby (OK): Twin brother of the No. 36 player in the 2022 class Luke Hasz, Dylan has been part of Bixby’s spree of state championship runs.

*Luke Hasz, TE, Bixby (OK): Speaking of, Hasz is the No. 1 player in the state of Oklahoma, boasting offers from Alabama, Ohio State, LSU, Florida State, Michigan State, Oklahoma, Oregon, Penn State, Ole Miss, Texas, Texas A&M, USC and a whole host of others. He is listed at 6-foot-3, 220 pounds and had 32 catches for 703 yards and nine touchdowns in 2020.

Caimon Mathis, CB, DeSoto (TX): A 5-11, 155-pound corner, Mathis has offers from Kansas and Mississippi State heading into his junior year of high school. The DeSoto pipeline has been a fruitful one for Mike Gundy, recently bringing in the likes of A.J. Green and LD Brown.

Canyon Moses, CB, Midland (TX): A 5-11, 180-pound corner, Moses picked up an offer from Kansas State on June 5 after a camp at SMU. His recruiting could start to take off after this cycle of camps.

Daniel Obinna, DT, Georgetown (TX): Obinna doesn’t have any DI offers to this point, but he has found his way onto the Cowboy staff’s radar. He is listed at 5-11, 279 pounds and still has junior and senior high school seasons upcoming.

*Morgan Pearson, WR, Ardmore (OK): Pearson is a highly sought-after prospect in the 2023 cycle and not just in football. Along with his football scholarship offer, Pearson also has an offer to play baseball in Stillwater. Listed at 6-1, 215, Pearson also holds offers from Iowa State, Pitt and Minnesota. He is the No. 5 player from Oklahoma in the 2023 class.

JaKobe Sanders, OL, Stillwater (OK): A hometown prospect, Sanders is listed at 6-3, 280 pounds. He boasts a 345-pound bench press, a 545-pound squat, and he also wrestles for Stillwater High.

Jalyn Stanford, ATH, Jenks (OK): Stanford is a running back and safety for Jenks and likely projects as the latter at the next level. He picked up his first DI offer Tuesday from Iowa State.

*Montrell Wade, ATH, Tyler (TX): OSU offered Wade back in 2019. The Cowboys were just his second offer, coming after Kansas. Since, he has also picked up offers from UTSA and Georgia Tech. Last season he caught 26 passes for 500 yards and four TDs, but he spent his OSU camp as a defensive back.

Ty Walls, ATH, Jenks (OK): Walls is a 6-foot, 175-pound two-sport athlete for Jenks. He’s a wide receiver/defensive back on the gridiron and a shortstop/pitcher on the diamond.

Steele Wasel, QB, Choctaw (OK): Another elite name, Wasel enters the summer before his junior year with offers from Tulsa and Virginia Tech. He is listed at 6-4, 215 pounds.

*Ryan Yaites, S, Denton (TX): Yaites is already a four-star prospect, ranked 85th in his class. He is the No. 6 safety in 2023 and already has offers from OSU, Notre Dame, Ole Miss, Texas, USC, TCU, LSU and others.

Mario Buford, ATH, DeSoto (TX): At 6-1, 175 pounds, Buford already has offers from Mississippi State, Nebraska, Oregon and UCF despite just finishing his freshman year of high school. His brother, Marques Buford, is headed to Nebraska as part of its 2021 class.

Zion Carter, DE, McKinney (TX): Carter lists himself at 6-3, 235 pounds (not bad for an upcoming sophomore). He is starting to catch the attention of the college football elites, as he has received camp invites to Alabama and LSU.

Ashton Williams, S, Trophy Club (TX): Williams is listed at 5-11, 175 pounds. Receiving an invite to a camp with this caliber of prospects at it at this age should say all you need to know about these 2024 prospects.