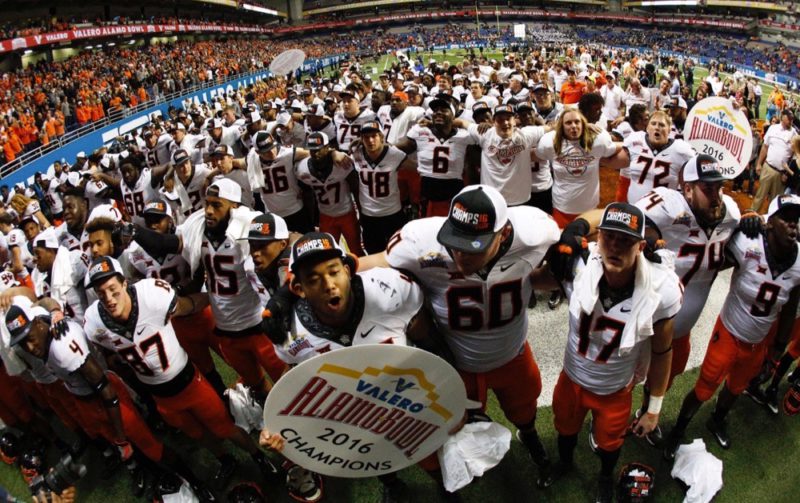 Oklahoma State’s No. 38 finish in the 247 recruiting rankings this year was unfortunately nothing new. As Kyle Boone pointed out last week. OSU has exactly one top 25 recruiting class in the last seven years.

For whatever reason, the 10th-winningest team in the country in that time, has not gone anywhere in recruiting. In fact, it has gone backwards. Let’s look at recruiting vs. winning in the Gundy era.

In the data below, I looked at classes immediately following seasons so the first bullet doesn’t include the 2005 class (which preceded the 2005 season) because I’m looking at wins leading to recruits, not the other way around. For the same reason, I included the 2010 class for the 2005-2009 range.

Likewise the 2017 class is included in the second bullet because it came after the 2016 season. Wins leading to recruiting. All rankings from Scout because they were the easiest to get into Excel.

This presumes that winning is the most important factor in recruiting, but it is strange that OSU’s recruiting classes have actually gotten worse as it has gotten better, but they are not alone nationally when it comes to this phenomenon.

I looked at the winningest schools since 2010 (when OSU first started getting awesome) and how this affected their recruiting. Since that year, OSU has the 10th-best record of any Power 5 team in the country. That’s astonishing. Their recruiting classes have flatlined in that time, though, as we saw above. An average of No. 35 from 2011 to today.

Here is a graph of the 30 winningest schools since the 2010 season and their corresponding average ranking of recruiting classes since February 2011. You want to be in the bottom left here. Alabama is No. 1 in both categories.

National recruiting rank is the y-axis (left side). National wins rank is the x-axis (bottom). Georgia and USC have been outrageously good at recruiting but barely top 20 in winning. Nebraska, Notre Dame, Auburn, Texas A&M and Virginia Tech can recruit, but then they don’t do anything with it.

Boise State has been a freak of nature. Same for Kansas State although they haven’t won nearly as much as Boise. The teams in the top right are squads you Do. Not. Want. To. Schedule.

Which leaves us with the Wisconsin, Oklahoma State, Michigan State, Baylor, TCU and Louisville group. All outside the top 25 on average in recruiting but all well inside the top 20 in winning. Call it coaching, call it player development, call it whatever you want — the bottom line is that it’s fascinating.

Those programs have had a ton of success, but their recruiting has not improved because of it. In OSU’s case, anyway, it has gotten worse! OSU has moved diagonally from the bottom right towards the top left on that graph from the first half of the Gundy era to the second. That’s not supposed to happen especially considering that it also upped its facilities in that time. You should move either towards the lower left here over time or towards the upper right.

Louisville and TCU are sort of understandable here since they were not in Power 5 conference for this entire timespan (2010-2017) so they would not necessarily be expected to recruit at a top 25 level. Baylor, OSU, Wisconsin and Michigan State though? Outliers. Wisconsin is even crazier than OSU.

Winning has not led to elite recruiting for those four teams for whatever reason. Or they are getting more bang for their  three-stars than any other programs in the nation since 2010. However you want to look at it.

I realize some people might say we need to be looking at recruiting classes 2-3 years down the road, and this is true if we’re looking at recruits leading to wins, but to me it’s fair to look at the one immediately following a big year. It’s fair to think OSU going 11-2 in 2010 should have at least mildly affected its 2011 class the next February.

The question, if you’re a fan of one of those teams is how to slowly move from that group you’re in into the one in the lower left. The one where you’re turning 10 wins into five-stars. There is a circular success to being in the bottom left which is where all schools should want to be. Those are the schools that are most often playing for titles.

This is where my will fractures. I do not know what to think. The optimist in me says “Nah, we good … OSU is killing it just the way it is. We’ll never get the big dog recruits so keep getting the smart ones.” The pessimist says, “It’s 2017, why is Nebraska out-recruiting OSU by a wide margin? Why isn’t Mike Gundy even trying to get four-star guys?”

The reality here is that OSU has the hard part down (winning). My fear, based on Mike Gundy’s philosophy, is that the next piece (elite recruiting) will never come to fruition. That the push towards that lower-left tier will never take place.

Next week we will look at what it would look like if it ever did and what OSU’s goals are to begin with.