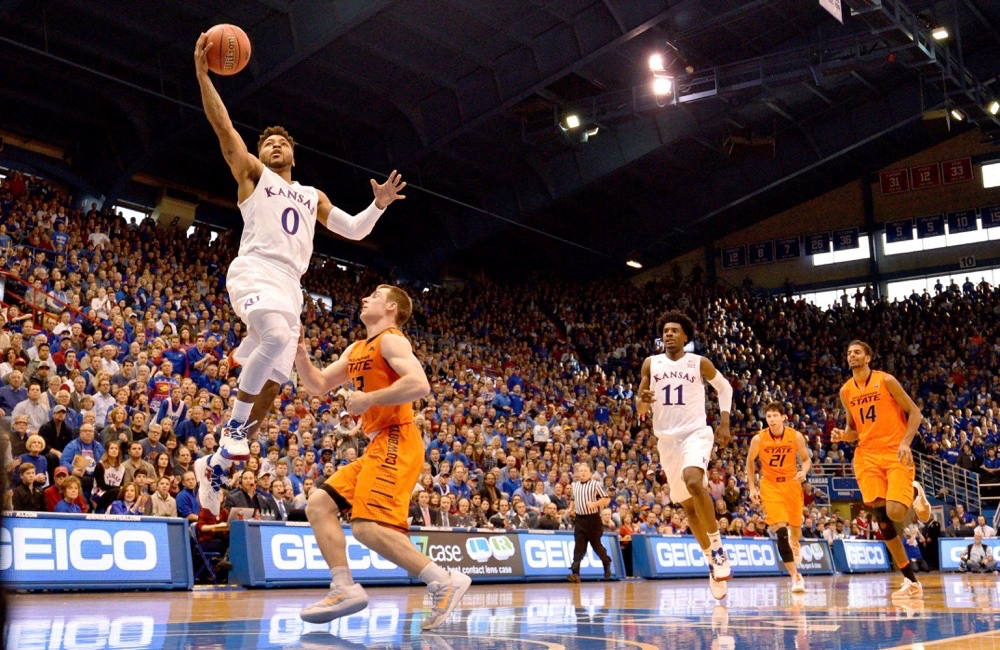 This series has long gone noticed but not circled on calendars.

To understand why Oklahoma State-Kansas hoops should rival, if not overtake, Bedlam football, you have to know some history about the series. KU leads the Cowboys 112-57 in hoops but trails 34-32 in Gallagher-Iba Arena.

In Bedlam football, Oklahoma has “Beat the hell outta” the Cowboys since 1904 when the series started. The Sooners lead that series 86-18-7. Even when the game is played in Stillwater, OU leads 39-7-5.

Read that again. OSU has not even won 10 home games against the Sooners. That means the Cowboys’ home winning percentage is .137. That’s amazing.

Now, we all understand that OU is a college football Goliath. The Sooners have a much stronger brand and pull than OSU. That means better facilities, more fans, better recruits, superior players and, though this might get me killed, better coaches.

In Bedlam, the OSU football Cowboys will forever resemble Sisyphus. First, Lynn O. “Pappy” Waldorf went six straight years without losing to OU. Then Jim Lookabaugh spent half a decade trying to beat the Sooners before he won twice only to lose four more times.

For the Cowboys, Bedlam has embodied the great king in Greek mythology, who was sentenced to roll the boulder up the mountain for the rest of his days only to have to crash down every time.

But with KU, there is (almost) expectation.

So many years of Bedlam football, Cowboy fans have just hoped. Only wished to beat the Sooners (i.e. 2014). Against the Jayhawks in basketball, particularly recently, there is a belief that an OSU can, and perhaps will, happen.

Since the turn of the century, OSU is 10-17 against Kansas. Not great. But not Bedlam football, either. Understand what I’m saying here. There is no vanquishing KU. It’s impossible. You can only beat them every once in a while.

The Jayhawks are trailing only eight opponents in series played at least 10 times ever, and no Big 12 team has a winning record all-time vs. KU.

Guess who is the closest, though.

As most OSU fans know, the Cowboys have won four out of the past 10 meetings with their friends to the north and five of seven at home. Two of the losses have been in at least one overtime period, and another three were decided by 10 points or fewer.

Because of that, attendance in Gallagher-Iba Arena for the KU game has topped Bedlam basketball attendance for four of the past five seasons. Even in all its 12-20 glory last year, 11,383 people watched OSU beat the Jayhawks by 19.

Notice the two sellouts for KU above. In the past five installments of Bedlam football in Stillwater, here are the turnouts.

Yes, GIA is much easier to fill than BPS. It’s exactly 77.4 percent easier. Also, yes, the weather is obviously much nicer for a Cowboy basketball game rather than a Bedlam football game in early December.

And you have to purchase a full season ticket in football to attend Bedlam whereas in hoops you can purchase a single game.

But the point remains that the Kansas-OSU basketball rivalry has been underrated from a competition and fan attendance standpoint.

I understand that no die-hard OSU fans will ever consider dethroning Bedlam football as their university’s top rivalry — and it is the money-maker here — but OSU-KU in hoops has been immense over the past two decades. And in this sport, OSU has the wins to prove it.