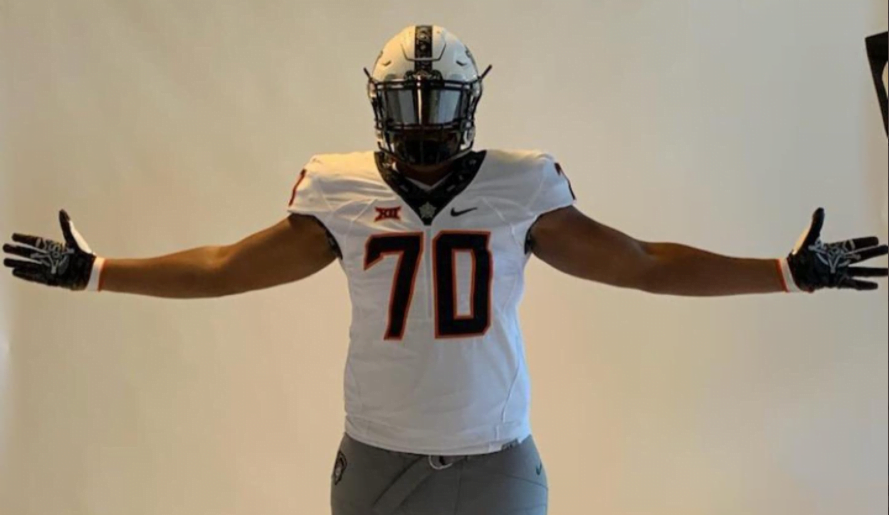 The Cowboys have cleared another hurdle in the competition for elite 2022 prospect Kelvin Banks Jr.

He included OSU in a Top 8 list that dropped on Wednesday, along with Oklahoma, LSU, Texas, Texas A&M, Arkansas, Oregon and Ole Miss.

Banks is a former OSU commit, who reopened his recruitment July 12, but he has since kept the Cowboys in consideration.

Banks is the No. 2 offensive tackle in the 2022 class, per 247 Sports, and the No. 6 prospect out of the state of Texas. He’s a five-star stud that’s more than just big and strong (though is definitely both of those things at 6-foot-5 and 300 pounds).

247’s Gabe Brooks had this to say during his assessment of Banks.

OSU Has a History With Banks

The Cowboys were the first to offer Banks and the first to receive a commitment from him back in September of 2019. But as the offers continued to roll in — he’s sitting at 24 — and his star continued to soar, Banks decommitted in July of last year and reopened his recruitment. But it’s never felt like OSU was out of the race, and the Cowboys’ inclusion on Wednesday bolsters that notion.

What Landing Banks Would Mean

If Banks signed with OSU today, his 0.9844 composite ranking would be the school’s second-highest ever, an eyelash under Bobby Reid’s 0.9845 ranking.

More than rankings, Banks has the potential to be a Day 1 starter on the Cowboys’ O-line. Talents like this don’t land in Stillwater all that often.