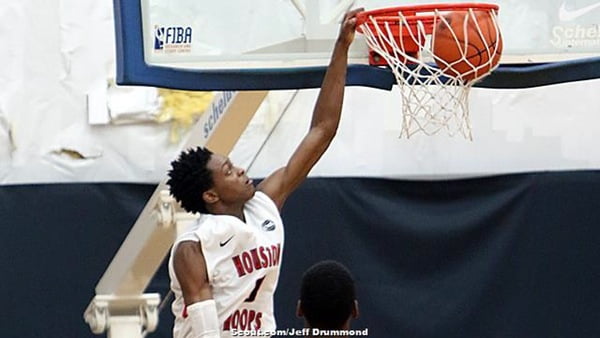 If Travis Ford and Butch Pierre know one thing, it’s how to recruit. Big name recruits Jawun Evans, Marcus Smart, Le’Bryan Nash and Phil Forte have all joined the program under Travis Ford’s watch. Now, Travis Ford and Co. are on the pursuit to try and reel in another big fish for the 2016 class. That fish goes by the name of De’Aaron Fox.

A five-star guard from Katy, Texas, Fox has offers from Kansas, Louisville, Texas, Arizona and many others. All the major programs are in on him.

On Monday, Oklahoma State threw their name in the ring for the No. 1 point guard in the 2016 class, according to 247sports.

In May, Fox notched an incredible 44-point performance at the Nike EYBL. What was most impressive? Fox scored 17 straight points during his performance. Not a typo.

Fox’s ability to take over the game offensively, make an impact on the defensive side, and showcase his incredible handles prove why the five-star point guard is desired by nearly every major program in the country. Travis Ford has had great success with luring top ranked guards to Stillwater, and it appears Ford and Co. are joining a heavyweight battle with some of the best in the country.