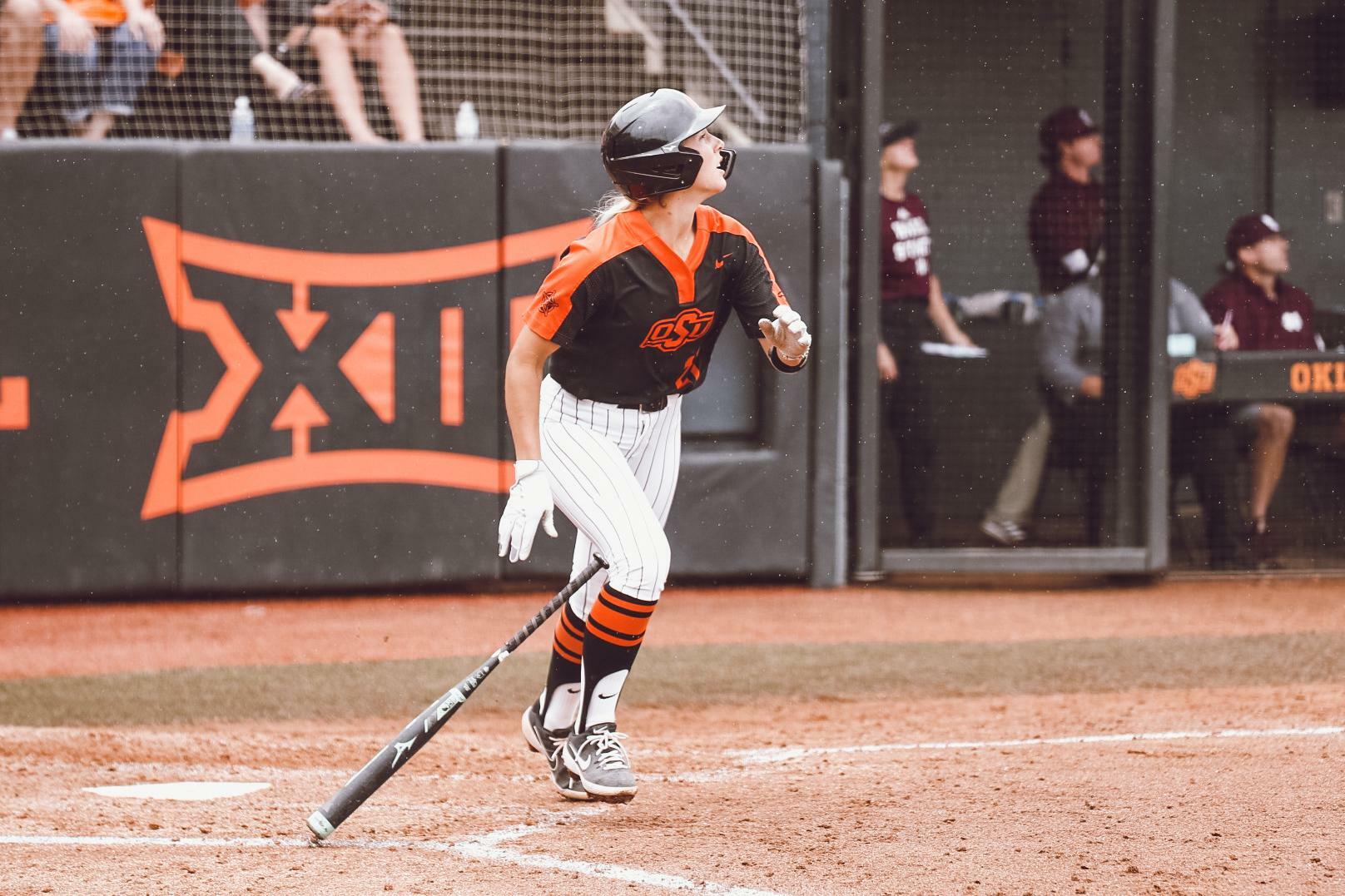 The Cowgirls were the visitors on the scoreboard, but the Bulldogs got on the board first when Mia Davidson’s single RBI put them up 1-0.

Just like when the two teams met the day before, MSU scored first, but — also like yesterday — the Cowgirls showed they can put up runs in bunches.

Reagan Wright hit a two-run home run in top of the second, her fourth on the season and OSU never looked back.

OSU scored four total runs in the second and one in the third when Sydney Penning swung at the first pitch of the inning and sent it over the left centerfield wall. That was home run No. 36 for the senior, setting a new Oklahoma State career record.

This was the Cowgirls’ 15-straight game with a home run and they’ve gone yard in 30 of the last 32. The three home runs on Sunday pushed OSU’s season total to 86. The Cowgirls set a new school record in Saturday’s game with 83.

Carrie Eberle pitched back-to-back games but looked as sharp as ever. She brought it in her 23rd win of the year, throwing 91 pitches with 60 of them being strikes.

Eberle struck out eight and, one day after walking a season-high six batters, didn’t walk a single one. She allowed six hits and two runs but only a hit and no runs after the second inning.

In the bottom of the second, Eberle did find herself in a bit of trouble, but she locked in and pitched herself out of it. After striking out the first two batters, Eberle allowed three-straight hits and threw a wild pitch. The result was MSU pulling to within 4-2 before Eberle struck Fa Leilua looking.

The Cowgirls are the type of team that makes you pay for errors and MSU had three costly mistakes.

In the top of the fourth, Chyenne Factor attempted a sac bunt but the MSU second baseman dropped the ball allowing her to make it first and loaded the bases with no outs. Alysen Febrey was up next and MSU starter Annie Willis walked her resulting in a run.

Then Hayley Busby stepped to the plate with a chance to blow this thing wide open. She made contact with two balls that went foul before getting to a full count.

But then Willis put the ball just over the plate and Busby got underneath and did what she does best sending it over the right centerfield wall for a grand slam and her 18th moon shot of the season. 10-2 Cowgirls.

While the Cowgirl bats surged, Eberle locked in from the circle, striking out all three over the third and fourth innings and allowing zero hits during that time.

The Cowgirls had one more chance to build on their run-rule margin at the top of the fifth. C Alexander struck out swinging and Kiley Naomi grounded out. Chyenne Factor flied out. Nothing doing.

Eberle just needed three outs to enact a mercy rule and seal the win. She grounded out one batter, then struck out the second. Fa Leilua got one more hit on Eberle before Carter Spexarth was popped out to end it.

This makes OSU’s 14th mercy-rule victory on the year and second in during this regional. The Cowgirls are on to super regional (which they’ll host) for the second-straight season and the third time in program history. The Cowgirls will face the winner of the Austin Regional, either Texas or Oregon.