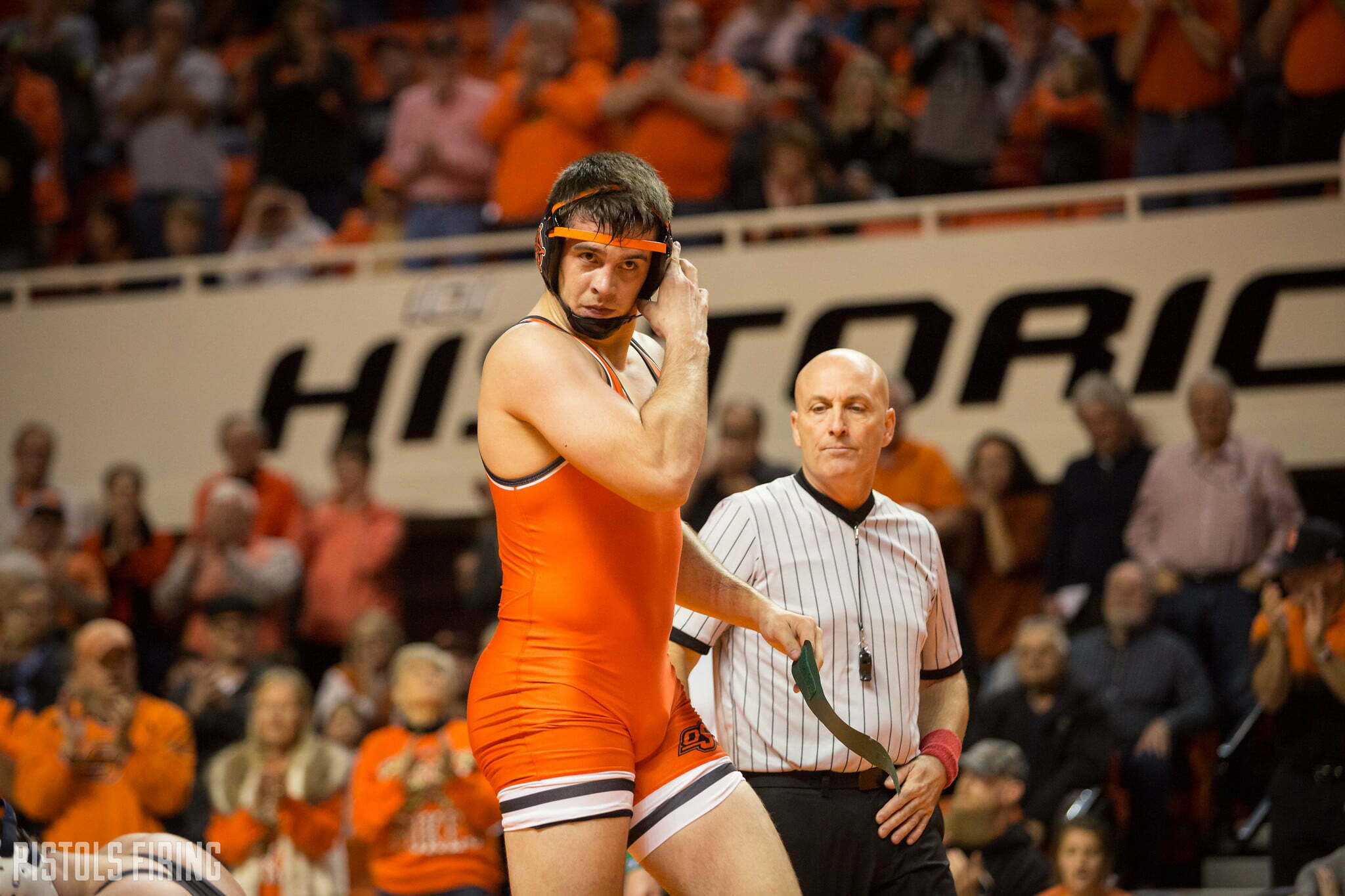 The Cowboys continued their dominance in the Bedlam series taking out OU 23-9. Here are my 5 thoughts on the dual.

1. Cowboys won most of the close ones and didn’t give up any bonus

For OU to have a shot to pull the upset, they needed to win every tight match and needed to get bonus points. Though the Sooners did win a few close ones, for the most part OSU didn’t let that happen. Dakota Geer pulled out a close one over Jake Woodley, Reece Witcraft had a huge 6-5 win over Anthony Madrigal, and possibly as important as those close wins, Dusty Hone kept things close with Dom Demas to avoid any bonus. They needed to do that to earn the win and they’ll need more of it throughout the season to continue to win dual meets.

2. Give Austin Harris a lot of credit

Going into the season, one of the bigger lineup questions for the Cowboys was heavyweight. With the graduation of Derek White there was really only one true heavyweight on the roster with Cornelius Putnam. We haven’t seen Putnam to this point, but the undersized Harris has stepped up in some dual meets and competed. He kept things tight with Lehigh’s All-American Jordan Wood, he knocked off Princeton’s Aiden Campbell in a match that had he lost the Cowboys would have dropped the dual, and he picked up another big win here over Josiah Jones. I don’t know that he’s quite setting himself up with the resume to snatch an NCAA tournament bid at this point, but he’s battling with the heavy hitters and he’s winning over guys that he can beat. That’s all you can really ask from a converted 197, who came into college as a 174, that’s wrestling up at 285.

3. OSU is dominating Bedlam across the board

It’s no secret that football gathers most of the attention in the Bedlam rivalry but Oklahoma State is quietly winning everything else in the annual series. OSU is 5-1-1 with wins in soccer, men’s and women’s cross country, wrestling, and one tie in the Bedlam soccer game in Norman. Most of the focus certainly surrounds the 34-16 loss in football, but OSU has a clear edge across the rest of the board this year, so far.

4. The Cowboys may have found a star in Reece Witcraft

Witcraft has been a big storyline to start the season for OSU. From pulling his redshirt, to the skin check controversy, to now upsetting pretty highly ranked opponents and getting ranked himself. Out of high school he was viewed a lot of different ways as an athlete. He won and placed high at some huge tournaments, but from time to time would seem to wrestle down to his competition and lose some head-scratchers.

Ultimately most prognosticators viewed him as a bit of a bang or bust type. A guy that clearly had a ton of talent and that could beat just about anyone, but also a guy that had some question marks. So far so good, Witcraft had one loss in his dual debut that could easily be chalked up to nerves and has otherwise performed very well. The Southern Scuffle in a few weeks will be a big test for him where we’ll get to see even more.

John Smith gave an update on Kaid Brock and Kaden Gfeller after the dual.

A couple things to note from postgame with John Smith:

If Kaden Gfeller doesn't feature at the Southern Scuffle it could mean he is done for the season.

Smith said that Kaid Brock, who tore his ACL in the summer, will no doubt be back at some point in January barring an injury.

Kaid Brock’s return is certain while Kaden Gfeller could be done for the season and his status is still up in the air.

It sounds like Kaid Brock will definitely give it a go this year after suffering a major injury in the offseason. Only question mark would seemingly be at which weight. He spent his first few years at 133 and last season at 141. With Witcraft’s redshirt being pulled one would assume Brock will look to go at 141 because it simply wouldn’t make much sense for the Cowboys to pull the redshirt of Witcraft knowing he wouldn’t be wrestling in the postseason this year. But who really knows? They may have made that decision not expecting Brock to be back. It will be interesting to see what happens.

Gfeller’s return being predicated upon whether or not he wrestles at the Southern Scuffle is certainly interesting. It raises some questions about what exactly is keeping him out. It’s tough to know without direct info from the staff.