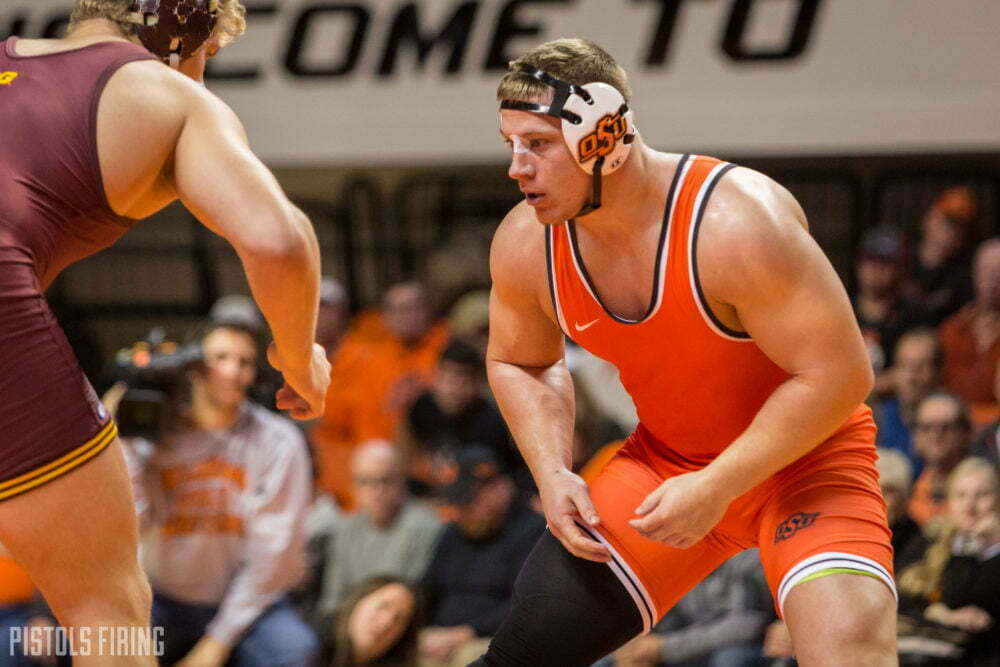 Yesterday we broke down what to expect from 125-157. Today we’re going to take a look at the upper weights and see how things may go there.

It’s sort of a different trend with OSU to have the upper weights saving/winning duals for the Cowboys but it’s been happening this year and they may have to rely on them to step up in this one.

This is an interesting one. Chandler’s a junior All-American and is currently ranked a little higher than the freshman, Alex Marinelli. But Marinelli, of course, is a big time recruit with pretty high expectations and has looked good this year himself. I would say this about almost any Chandler Rogers match but it’s really tough to know what to expect here.

Rogers is a high flyer with a really funky style. He works a lot of 2-on-1 ties and hits a lot of really wild throws and other “different” moves. He’s even said he makes some of them up. Some of the time it’s awesome and he picks up huge falls and big bonus points. Other times, it gets him into trouble and he loses matches he shouldn’t. This could be either one of those and anything in between really. Should be fun.

Smith opened up with some really tough competition this year in his first season as a starter. He took a few losses but seems to have settled in a bit. On paper he should win here. He’s not a “huge” favorite, but he’s solid. He’s lost a few but doesn’t seem to drop these types of matches.

This weight is the reason the title says “maybe”. Moore or Marsden should be able to handle Bowman comfortably IMO. The question is do they send out Pat Downey. Some of you that follow wrestling closely may be aware of him but for the more casual fan Downey used to wrestle for ISU and was kicked off the team and is now at Iowa. He hasn’t wrestled for Iowa yet but it’s possible they could trot him out here and he’d probably be favored. He’s really talented but Iowa — and even Downey, who is typically pretty vocal on social media — have played this close to the vest and not revealed whether or not he’ll wrestle.

Weigel has already won one head-to-head match here taking out Wilcke 6-0 last year. Wilcke is solid. Maybe a bit better than Weigel on his feet but no one in the country can match Weigel’s mat wrestling. As usual, I’d expect this to be the difference and win Weigel the match.

The dual could definitely come down to this. Stoll is a good wrestler but has had some injury issues. Most ranking sites have him around No. 3-4 and White at around No. 8-9. White has already shown he can physically hang with the big guys after making the move from 197 to HWT but when these guys make that jump sometimes they struggle to get out from bottom.

As long as White can get away from bottom I think he at least has a shot to win here. He’s faster and more athletic, so I think he can get takedowns as long as he doesn’t get stuffed underneath. This would be a huge win for White and for the team long term. If he wins here he has a legit shot to win out and get a high seed at the NCAA tournament.

On paper it’s a 5-5 dual depending on whether or not Downey wrestles at 184 and will come down to bonus.