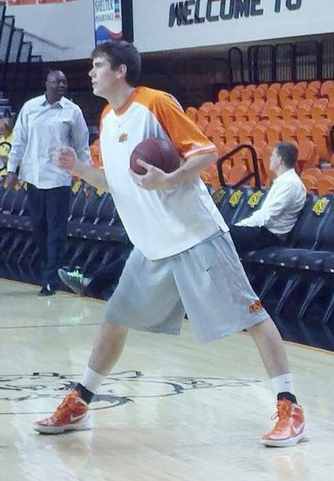 Why: Really it’s pretty remarkable he’s on this list at all. Our count of “members of the Cox family who didn’t play one minute of high school basketball but somehow found our way onto the OSU basketball team” currently sits at two[1. Including one of our own here at PFB — Nolan.].

Your move, Austin[2. He’s the third brother, also 6’9+, and he may have some grad school eligibility left…].

Seriously though, Mason is a big (well, tall) body that can help push Cobbins (and Jurick?) in practice and give Ford the depth he needs for scrimmages[3. Something we apparently lacked last year given that Ford was running with the teams half the time.].

He can block shots, run the floor, and apparently sports a punchy turnaround hook.

Unfortunately he will never be 1/4 the dunker (or FIFA gamer) his older brother is.

Stats: 3 GP (that is literally the only number in his career statistics).

@pistolsguy I'm guessing mrs cox won't be texting you telling you to have a good day after tomorrow.

RT @pistolsguy: #OSUrank starting back up tomorrow as we look at the 14th best #okstate basketball player. Any guesses?// Aaron hill.