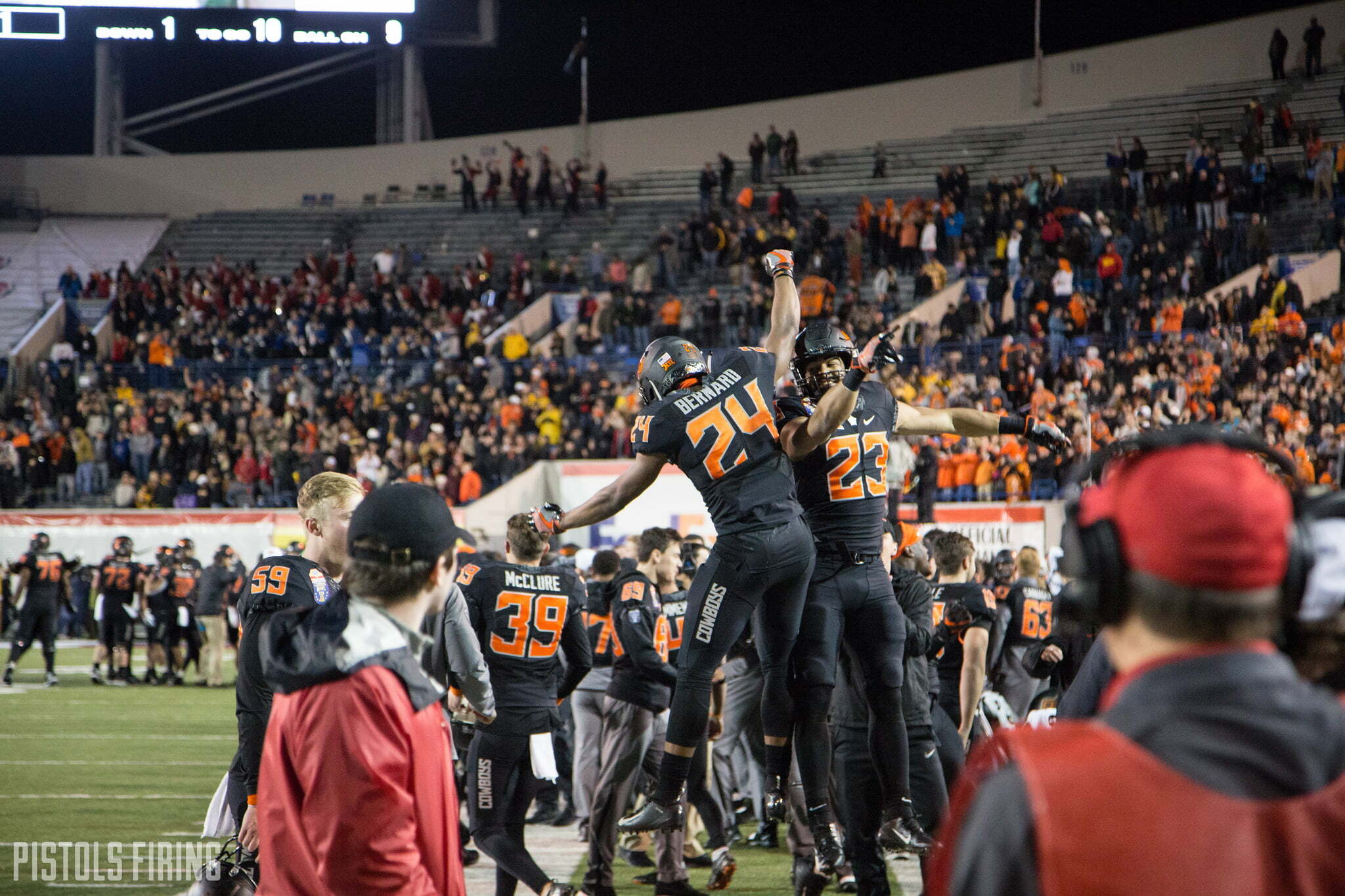 An up-and-down season from a sporadic defense ended with a huge play from one of its youngest players. It was a fitting culmination to a wacky year.

Kolby Peel, the true freshman who has shown flashes of his aggression and playmaking ability all year, ended New Year’s Eve with a team-high (and career-high) nine tackles. Eight of those were solo grabs including this, the last stop of the game.

Senior linebacker Justin Phillips lauded the first-year DB for this game-sealing play after the win.

“Ultimately, it was a great play by our young safety, Kolby Peel,” said Phillips. “At that type of moment, during the game, everybody’s just trying to be disciplined and just make sure you’ve got your eyes on your keys and things like that. So I think everybody was disciplined at that moment in time and everybody played their role and he came up with a big stop for us. … He made a great play.”

It was a big-time stop from a young secondary running even thinner than normal in OSU’s finale. Cornerbacks Rodarius Williams and Kemah Siverand were ejected with targeting penalties and starting safety Malcolm Rodriguez left the game due to injury.

“If one more would have gone down, I’m not sure who would have went in at that time,” said Mike Gundy. “But proud of those guys for competing and making plays and finding a way to win in the end.”

Peel was the star on Monday night but he’s not the only young playmaker who paints the future a little brighter for a secondary that has had its struggles recently.

Overall, OSU’s defense was not great in 2018. In the first year after saying goodbye to Glenn Spencer the unit regressed, posting worse numbers in points per drive, defensive efficiency, turnovers and scoring defense.

Those are the facts of the case, and they are undisputed.

But there are reasons for the less than stellar numbers aside from the obvious — a new DC with a brand new scheme and trying to adapt both to the Big 12.

The Cowboys suffered a huge loss when Darrion Daniels when down with injury, but the hardest-felt absence on the OSU D was the loss of senior safeties Tre Flowers and Ramon Richards from the previous year.

Similar to what happened to the cornerback group a year before in 2017. A.J. Green and Rodarius Williams were thrown into the fire as a redshirt freshman and a true sophomore manning either cover spot. Their predicted improvement in 2018 was probably hidden by the youth at safety this season. But plenty of those young safeties saw significant reps and went through their own growing pains in 2018.

True frosh Jarrick Bernard played all 13 games and started the last nine. Kolby Peel, our late-game hero, is also one year removed from prom and played in every game, starting four.

The elder statesmen returning for Dan Hammerschmidt’s group in 2019 are Malcolm Rodriguez, the true sophomore starter opposite Bernard, and redshirt juniors Za’Carrius Green and Malik Givens.

The Cowboys said goodbye to Thabo Mwaniki who transferred after losing his starting job to Bernard and lose linebacker-turned-safety Kenneth Edison-McGruder who has exhausted his eligibility.

But there is a slew of talented youngsters like Tanner McCalister, JayVeon Cardwell, Kanion Williams and others, and Knowles should be looking at a nice mix of experience and youth.

That dearth of experience is not ideal any year, especially at such a crucial position both for Knowles’ 4-2-5 scheme and the pass-happy Big 12. And especially in Year 1 of a new DC. But the experience OSU’s secondary gained in 2018 should make for a fairly young, but battle-tested group in 2019.

This two-year transition period, though unfortunate, may yet pay off for Oklahoma State. The back end of Jim Knowles’ 2019 defense will be stocked with proven playmakers who have been around the block a time or two. There will still be blitzes on top of blitzes and plenty of opportunities to get beat, but what was the weakest link in terms of maturity should be a strength for OSU come next fall.