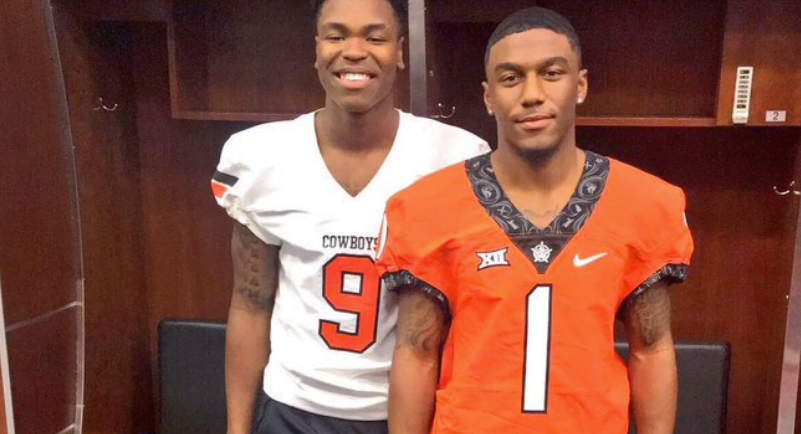 Oklahoma State has made its living on the recruiting trail sniffing out package deals of late. In 2016, twins Zach and Cade Smith joined the program as preferred walk-ons. Just a week ago, twins Tylan and Tracin Wallace, two Fort Worth prospects from South Hills, signed with Oklahoma State as part of the 2017 class.

Another recruiting cycle, same deal for OSU, which is once again looking to continue its success in pairs in 2018. This time, though, it’s not twins. It’s two highly-rated prospects from Cy Springs, Texas. Teammates Taye Barber and Leon O’Neal, Jr.

“We think about it from time to time,” Barber said of a potential package deal for the two teammates. “It would be nice.”

Barber and O’Neal, Jr. have both held offers from the Cowboys for quite some time. A quarterback in high school, Barber said OSU is looking at him as a wide receiver/running back, and O’Neal projects as a safety with a 6-foot-1 frame that can stretch the field and likely play as a freshman.

For Barber, OSU was his first offer.

“It impacts a lot,” said Barber of OSU extending him his first Division I scholarship. “They were the first school to believe in my ability as a football player.”

Since that time, he’s gone from a little known prospect to one of the state’s next big things. He’s accumulated nine scholarship offers from Iowa State, Houston, TCU, SMU and others. While O’Neal, a safety, has racked up offers from Alabama, Oklahoma, Texas A&M and others.

Being highly-rated prospects, each will likely take their time with their decision. Barber, who recently visited Stillwater with O’Neal for junior day, says he will take his time with his recruitment. He plans to take his official visits, which can’t take place until his senior year, before making any final decisions.

Wherever he chooses, though, they’ll get an athlete on campus quickly. He adds that he will be an early enrollee, and is looking for a spot to make an instant impact for his school. And Oklahoma State seems to be in a position to have his attention.

“I really like [OSU] a lot,” Barber said. “I like the program they have. I have a lot of interest in them.”