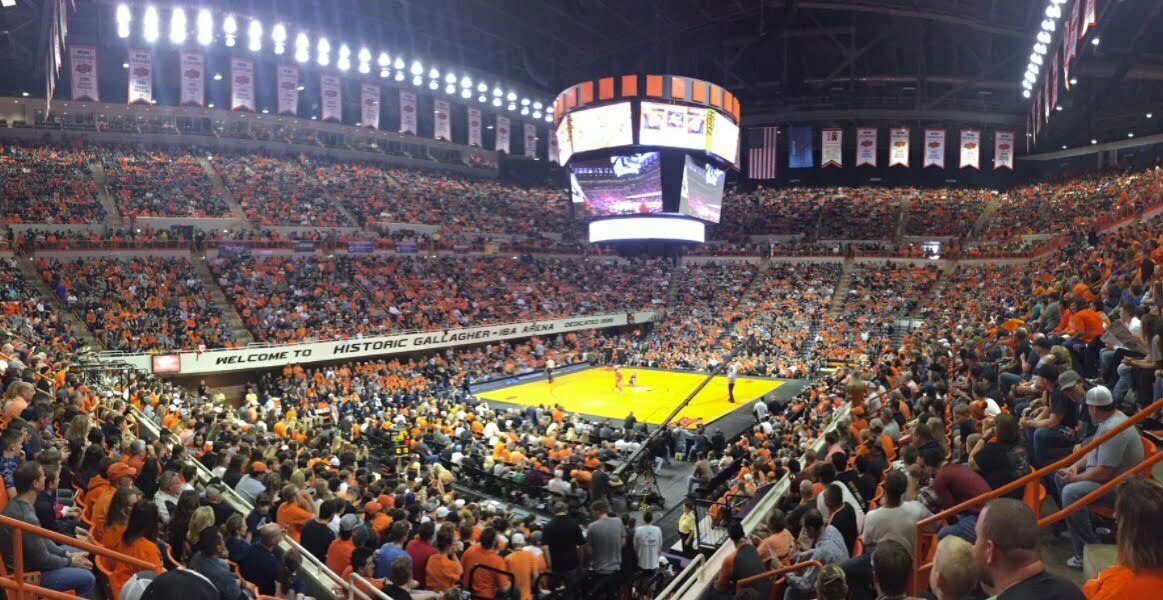 When Penn State’s Bo Nickal pinned Nolan Boyd in the 184-pound match, it was coffins for Oklahoma State.

The No. 1-ranked Cowboy wrestling team lost in a dual meet for the first time in almost a year, 27-13, in the NWCA Bowl Series against No. 2 PSU in the most-attended event ever in Gallagher-Iba. Boyd was pinned in 38 seconds, and the energy in GIA went from hopeful to dreadful.

“He did not finish the shot, which led into the pin,” coach John Smith said. “Any time your head goes into your knee, you’re gonna get cradled. … Nolan’s a guy that’ll be the first guy in the room tomorrow.”

Boyd, a senior 184-pounder, hadn’t been pinned in a dual meet in his collegiate career. His loss was the knickpoint in a dual that had swung in momentum.

But OSU football defensive coordinator, who was in attendance among the 14,058 others, said he heard differently.

Penn St. 125 looked at his coach and said. I just broke my ankle.Then kept going.I want some of that.@CowboyWrestling #authentictoughness pic.twitter.com/bBj1Pz7twx

Kaid Brock was next at 133 pounds and easily handled unranked George Carpenter. Then No. 1 Dean Heil avoided back-to-back pin opportunities in the final 30 seconds of the second and third periods against No. 11 Jimmy Gulibon.

That was as good as it got for the Cowboys.

Smith said too many of the Cowboys let the matches come to them rather than attacking.

“Getting into the beef of their lineup: (No. 1 Zain) Retherford, (No. 1 Jason) Nolf, (No. 4 Vincenzo) Joseph, (No. 7 Mark) Hall, (No. 2 Bo) Nickal, it just kinda looked like we were a team that was trying rather than doing,” Smith said. “It didn’t appear when it got real critical, that we had the confidence that we needed.”

Many of the final seven matches were decided in the third period.

No. 2 Anthony Collica lost to top-ranked Zain Retherford because of riding time. Penn State’s Mark Hall won the 174-pound match against Kyle Crutchmer because of a third-period takedown. And in 197, Preston Weigel had to win to keep OSU alive but couldn’t as PSU’s Matt McCutcheon got a takedown with 23 seconds left for a 4-3 win.

Many of the Nittany Lions’ wrestlers have deeper résumés than the Cowboys’, but Smith said it tough to watch his team be right there and come short so often.

“In the end, we just didn’t have it,” Smith said, pounding his fist. “It was just like — like our big brother or something. Just didn’t have the emotions that it takes to go out and do something special.”

Smith said the scores are what should motivate the team going forward. Heil said there were negatives in almost every match.

“Aside from Nick’s match, you look at every match, and you can just pick it apart,” Heil said. “Kaid was a takedown or two takedowns away from getting a tech (fall). Next thing you know, he gets taken down. I’m ranked No. 1 in the country, and I’m beating a guy 3-2, when I should be major (decision).”

Heil said, as the leader, it’s particularly disappointing to see the performance on such a massive stage.

“You got a bunch of guys who, like coach said, they just went out and tried,” Heil said. “They just tried. They didn’t do.”