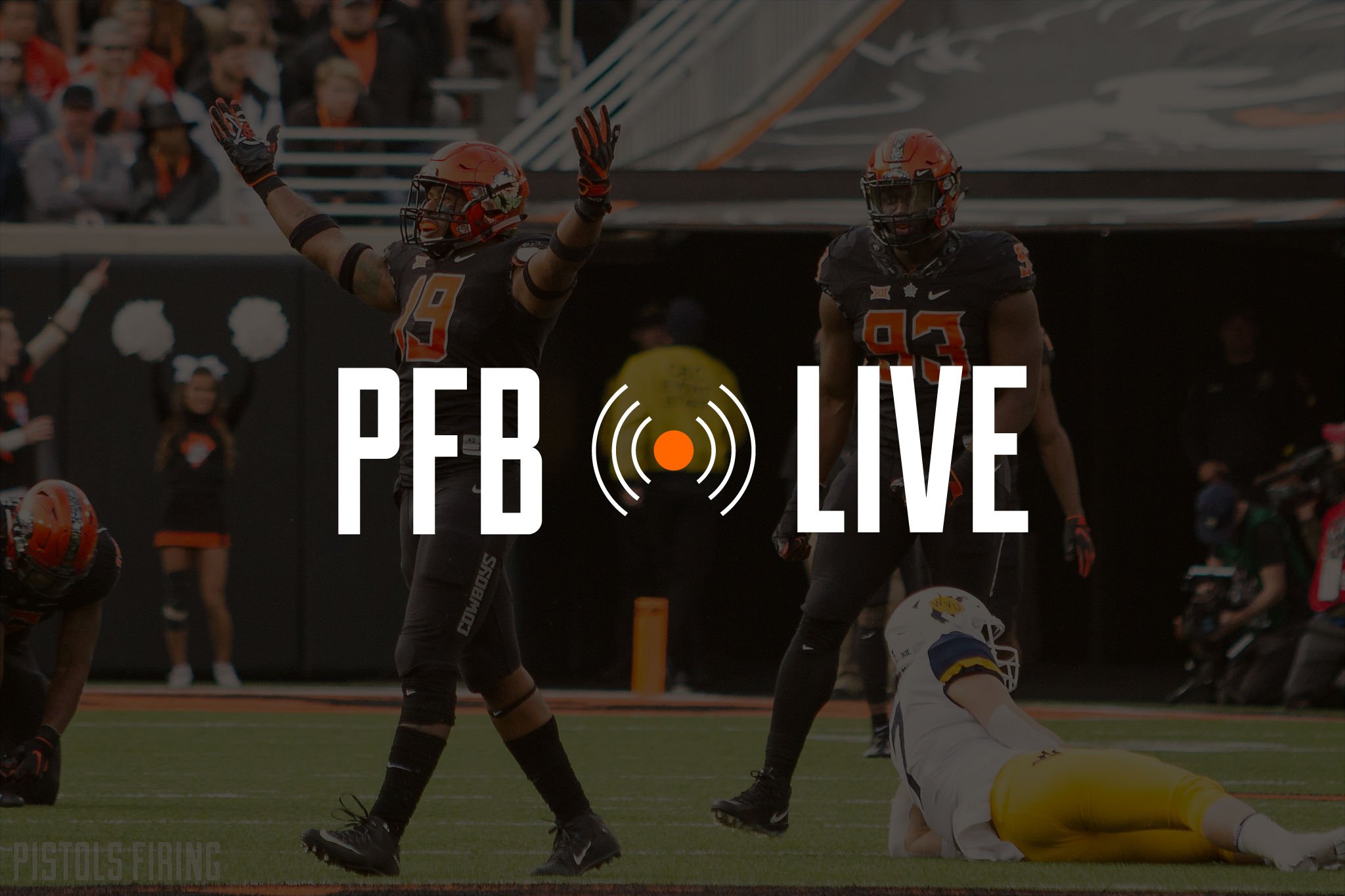 The Cowboys got another chance at the win when TCU decide to a attempt a field goal on fourth down with 14 seconds remaining. It was a 34-yard miss. Cornelius found Stoner 9 yards and then gave it one last heave that fell to the grass.

OSU finishes its season 6-6 and 3-6 in the Big 12, and awaits its bowl fate. It will be the eighth and final bowl-eligible team from the Big 12.

4Q: Oklahoma State 24 | TCU 31: OSU’s defense came up huge with Kolby Peel making the play to get the ball back.

4Q: Oklahoma State 24 | TCU 31: Stop me if you’ve heard this before. Taylor Cornelius has exorcised his first half demons and is leading Oklahoma State on a fourth quarter comeback attempt.

We’ll see if this one ends in a win or not but the Pokes are back to within 7 with five minutes to go.

4Q: Oklahoma State 17 | TCU 31: The Horned Frogs might have just sealed their sixth win and a bowl berth with Muehlstein pump-faked his way to his second TD.

4Q: Oklahoma State 17 | TCU 24: OSU put together its best drive of the night picking up 80 yards on 12 plays. And it almost didn’t happen. A TCU holding call saved the possession, and the Cornelius and Chuba did the rest.

4Q: Oklahoma State 10 | TCU 24: The Cowboys defense recovered from the penalty reset of downs and held forced another punt after his big play by Justin Phillips.

The Frogs are knocking on OSU’s door on second-and-10 at the 35-yard line. The Cowboys finally found pay dirt but can’t help get out of their own way. A TCU touchdown here feels like a deal-breaker.

3Q: Oklahoma State 10 | TCU 24: OSU cannot help but shoot itself in the foot. After forcing a three-and-out, the Pokes were flagged for roughing the punter when freshman Cowboy Back Logan Carter did this.

3Q: Oklahoma State 3 | TCU 24: The OSU D holds TCU to 3 after some big plays to get down the field and this INT that should have been by A.J. Green.

Across the field, this year’s Biletnikoff finalist has one catch on six targets for 4 yards.

3Q: Oklahoma State 3 | TCU 21: The Horned Frogs have scored two touchdowns on one offensive play in the second half.

2Q: Oklahoma State 3 | TCU 7: OSU didn’t take a knee with a minute left but maybe it should have. A late timeout with three seconds left allowed Taylor Cornelius to add to his season INT total on a Hail Mary! play.

TCU takes a 7-3 lead with a minute left in the half. Let’s see how aggressive OSU is with their remaining 69 seconds.

2Q: Oklahoma State 3 | TCU 0: Justin Phillips has been the most active player on either side of the ball for OSU. He added this nice open-field tackle which grounded the Horned Frogs’ drive.

This is how an actual #Big12 game has started. pic.twitter.com/ns0SGFhl3N

2Q: Oklahoma State 3 | TCU 0: OSU appeared to have another turnover with a Jalen Reagor fumble, but the play was called dead due to forward progress which can’t be reviewed.

2Q: Oklahoma State 3 | TCU 0: About that whole getting out of their own way comment. The Pokes’ fall behind the chains with a fumble exchange between Taylor Cornelius and LD Brown.

The Cowboys go three-and-out. You can’t afford too many of those against any FBS team, much less on the road.

TCU is down 3-0 nothing but has outgained Oklahoma State 95-30 and is doing its best to put together its first scoring drive. Will start the second period first-and-10 from OSU’s 48.

1Q: Oklahoma State 3 | TCU 0: Penalty issues rearing their ugly head. This feels a lot like the Baylor game early. Both times the Pokes were coming off of home wins over top 10 teams and look undisciplined and unengaged. Now three penalties in the first quarter. Pokes punt.

1Q: Oklahoma State 3 | TCU 0: The Cowboys defense did its best to give up points to TCU, but were somehow unsuccessful. After giving up a 24-yard rush to Jalen Reagor, Calvin Bundage was flagged for a flagrant facemask.

But the Frogs were unable to convert and missed on a 40-yard field goal into the wind.

1Q: Oklahoma State 3 | TCU 0: Taylor Cornelius looks to Britton Abbott for the first time this year on third and 4 and he pays it off with a first down.

But that success was short-lived as the Pokes punt it away four plays later. Not much going early for OSU’s offense. That penalty that absolved that opening-drive TD might (?) be significant later.

1Q: Oklahoma State 3 | TCU 0: The Pokes get off of the field after five plays and giving up 26 yards. A short punt gives OSU the ball at its own 27-yard line.

According to the TV crew, the play clock is inop tonight so an official will hold his hand up for the offense when the clock gets to 10.

1Q: Oklahoma State 3 | TCU 0: The Cowboys were quick to convert their turnover into 6 points with a nice throw and catch between Taylor Cornelius and Tyron Johnson. But Tylan Wallace apparently wanted to be the first OSU receiver to score and the play was called back due to an offensive PI.

OSU has to settle for 3. The score is 3-0 with both teams combined for -8 yards.

1Q: Oklahoma State 0 | TCU 0: The Cowboys defense starts the game with two-straight sacks and takes the ball back with a strip fumble thanks to Jarrell Owens and Trey Carter. and the fumble is recovered by Enoch Smith.

OSU wins the toss and defers. Jake McClure kickoff is a touchback. TCU ball at the OSU 35.

Some good news on the injury front.

The Pokes punched their ticket to the postseason last week with a huge win over No. 7 West Virginia. Now they head to Ft. Worth to take on a Horned Frogs group trying to do the same.

Mike Gundy has talked about his team’s need to put together three consecutive good performances and is looking for what he has termed a “three-peat.” Will they accomplish that or will there be a letdown after the huge upset win?

Let’s find out together.