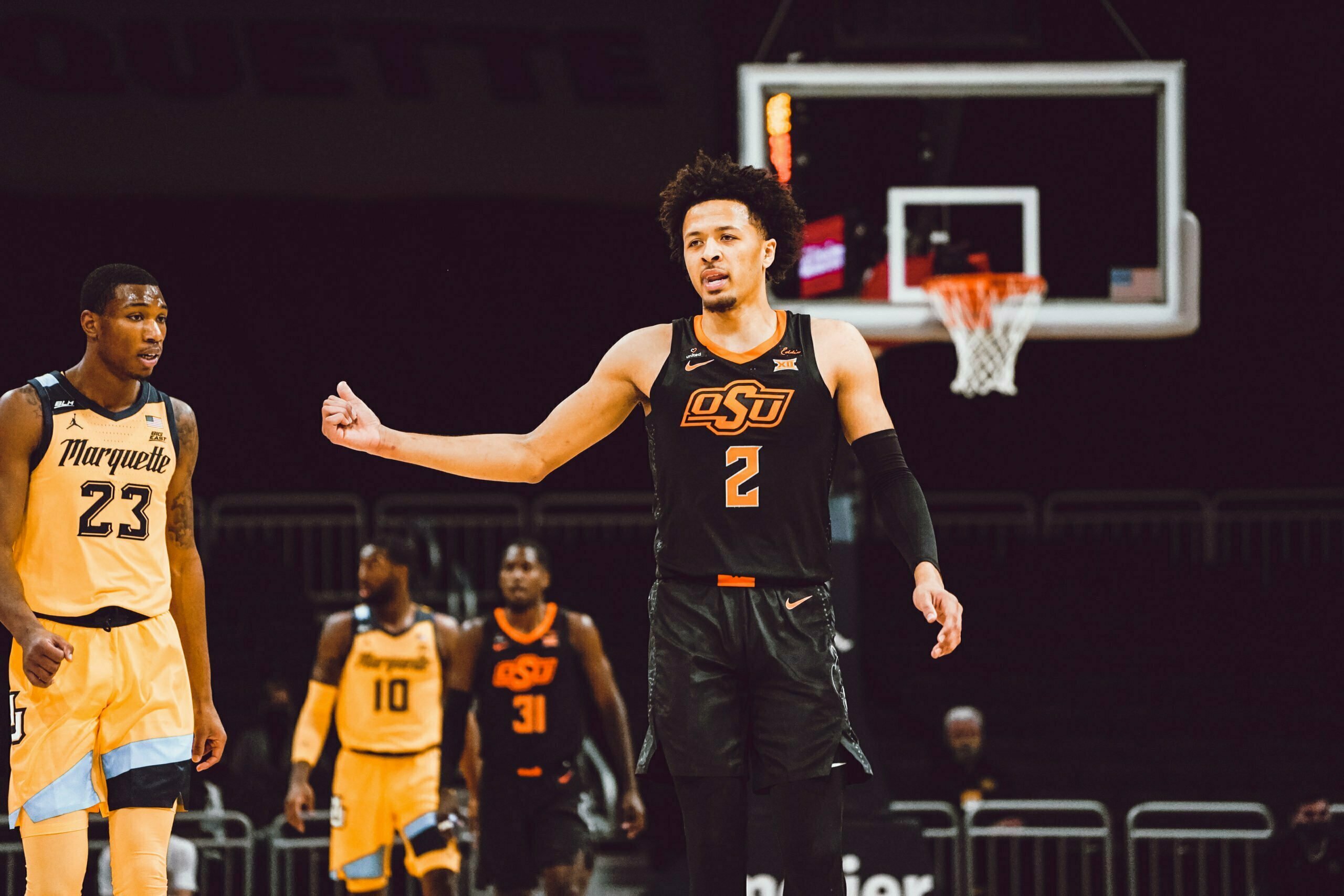 Ahead of the OSU hoops final nonconference game, and Cowboy football’s final conference matchup, the Pistols Firing staff convened to discuss what we’ve learned about Cade Cunningham through five games and what we expect to see from Mike Gundy’s squad this weekend and moving forward.

Kyle Cox: Okay, let’s start with Cade. What is the most exciting thing you’ve seen from the blue-chipper during his first five collegiate games?

Marshall Scott: How everything just looks so easy for him. The first time that didn’t happen was in the first half Tuesday, but then he got 16 in the final six minutes of the game. Everything is so smooth, it comes naturally and he has proven he can take over.

Cox: To me it’s with how little effort he seems to take over a game. He’s not going to dominate the conversation throughout a half, but you’ll look up and he’s got 12 points, two assists and three rebounds in 3-4 minutes, while barely beading a drop of sweat.

It was also exciting to see him take the game over late when he needed to against ORU, and how easy that seemed to be for him.

Kyle Boone: To me it’s two-fold excitement with Cade. First, the fact that Cade is so gifted as a passer immediately jumps at you. He sees the floor the way Luka and Ja and Trae see the floor, and he seems to always be a step ahead of everyone. Second, and this is just a personal joy, is that he’s just an absolute physical monster. Seeing him body up poor defenders in the post has been a delight. Yes, he’s a point guard, but people forget he’s 6-foot-8 and an absolute physical force who basically is unstoppable in most matchups.

Cox: To that point, the ability for him to post up smaller guards will be huge for OSU’s offense once league gets underway. He knows when to pass it and when to back dudes down. He plays like a vet.

Cox: So what questions do you still need answered about Cade or OSU as we enter conference play next week?

Scott: The Pokes haven’t hit the 3 consistently enough to start the year. Ferron Flavors, Rondel Walker and Bryce Williams are all capable guys, but Cade has been the Cowboys’ best 3-point shooter to start the year. That’s their next step offensively. Defensively, they need to start games sooner. Boynton mentioned after the Oakland game that open looks early gave Rashad Williams the confidence to end up dropping 32. Something similar happened with Max Abmas on Tuesday. They have been playing first halves more lax than they ought to, and they can’t do that against Big 12 schools.

Boone: No questions for Cade; he’s a perfect angel. But OSU as a team, I’m curious to see how this offense in particular evolves. Cade will do his thing. This team’s length makes it a threat to be really good night in and night out defensively. But it sometimes feels sloggy the way this team gets points on offense. We’ve seen Rondel Walker and Bryce Williams both emerge as reliable options of late, but is it sustainable? Like Marshall said, it definitely feels like the 3-point shooting is due for some positive regression. If this is the way they shoot from distance all season, though, OSU is going to be in a ton of defensive dog fights because it can’t put up enough points.

Cox: Mike Boynton has always been good at making adjustments, and I’m sure he will continue to do so. But I want to see if the Cowboys can impose their will on other teams, especially at the Big 12 level.

Can the Cowboys D teams up man-to-man consistently? There seem to still be some bugs that needed worked out. On the other side, are the Pokes going to be able to take advantage of their athleticism and get out in transition. And as you guys mentioned, perimeter shooting will be something to watch.

Cox: Okay, switching gears — What do you want to see from Mike Gundy’s group in what should be a winnable finale, but following a gut-punch from TCU?

Scott: Points. Saturday’s game was puzzling in that I didn’t think Spencer Sanders played horribly; I didn’t think Dez Jackson had a bad day, but somehow the Cowboys were just allergic to the end zone. I don’t know what bowl season will look like in 2020, but it would be nice to see some sort of what this offense was supposed to look like in the beginning of the year in this final regular season game.

Boone: I think at this point you’re just hoping the team comes out with some spirit on offense. Last week was a slog, especially on that side of the ball. Not being able to take advantage of five turnovers is less than ideal and losing in that type of gamescript is practically unheard of from Gundy-coached clubs. We’re seeing right now what looks like one of his worst-ever offensive units since he took over despite some seriously lofty preseason expectations, so it’d be good to end on a positive note.

Cox: A win, obviously, and I want to see some fight — regardless of who is playing — and I think we will. Attitude matters and the way you finish matters more than just for coach speak fodder. This has been a weird year and it’s definitely not gone the way the Pokes, or their fans, hoped. But a strong effort heading into the postseason would serve as a small consolation prize. It would at least get rid of the taste of an ugly loss before bowl season.

Boone: To go a level deeper there — because obviously everyone wants offensive points and a dub — I personally am rooting for seeing some fresh blood. Give me some Shane Illingworth, some Dominic Richardson, some Langston Anderson. Would be cool to get a preview of perhaps what this team might look like in 2021, even if it’s in some garbage time or sprinkled throughout the game.

Scott: Give Brennan Presley the football.

Boone: Basically, yes. I am a tried and true Dillon Stoner truther, but give Brennan all the opportunities to go be great. That includes punt return duties, slot shots, wildcat QB, safety, assistant coach, etc.

Scott: I’m also a Stoner stan, but they can both be on the field at the same time.

Cox: I like that @boone. If you’re Mike Gundy, hairdo and all, do you have a legit QB race in the spring (obv. not knowing how the last two games go)?

Scott: It’s so hard to tell because the controlled variables (the offensive line) was so out of whack this season. There will definitely be questions this spring, warranted or otherwise, about the QB spot in 2021 … unless Sanders goes full Johnny Football to end the year.

Boone: I think it’ll be an open QB competition this spring. We’ve seen some great stuff from Spencer but we’ve seen some bad stuff, too. Meanwhile, Shane has acquitted himself nicely considering some tough spots he’s been thrust into, including playing as a freshman when no one expected he would. Both have been good in spurts, both bad in spurts, but neither to me have definitively earned the QB1 status for 2021.

Cox: I have been in the engineer rotation on the Spencer Train since it left the station, but I think you have to be open to change. We’ll see how things play out but I’d want both Sanders and Trillingworth to get plenty of reps in the spring.

Boone: This is part of a larger discussion, but to me, the inconsistent quarterback play makes OSU’s decision to not recruit a quarterback in this cycle all the more confusing. Maybe they go get a grad transfer or someone who can push the play up a notch.

Scott: Yeah, it kinda made sense last year, as Sanders very much seemed to be the guy long term, but with a down year this season, that call might go back to bite OSU.

Scott: I quietly think Gunnar could be a Ehlinger-like QB as like a redshirt senior, not going to dazzle but just a grinder. That’s awful hard to project, though.

Boone: It will be a tightrope for Gundy to walk, too. You want Spencer — if he retains the job — to not lose his confidence. But you also want Trill to have hope that, if he performs well, he can be the long-term solution at the position. Suspect a healthy competition is upon us, though I also suspect it’ll be downplayed. Honestly, OSU needed Spencer to take over and be that dude — he’s a four-star talent from Texas, and so the pitch to other Texas talents would be easier if he was Deshaun Watson 2.0 — but thus far he has not been that.

Cox: You think he’ll be that overrated, @Marshall Scott?

Scott: Don’t you go putting words in my mouth!

Boone: I don’t know what to expect from Gunnar but having watched him a few times at Stillwater, I think he unfairly gets criticism just because he wasn’t ranked, wasn’t highly-touted and is Mike’s son. He’s a fine quarterback. Not the strongest arm, not super mobile, but a very hard worker, film junkie, solid decision-maker. Kind of a luxury to have him on the roster as a walk-on. Honestly pretty interested to see how his career turns out.