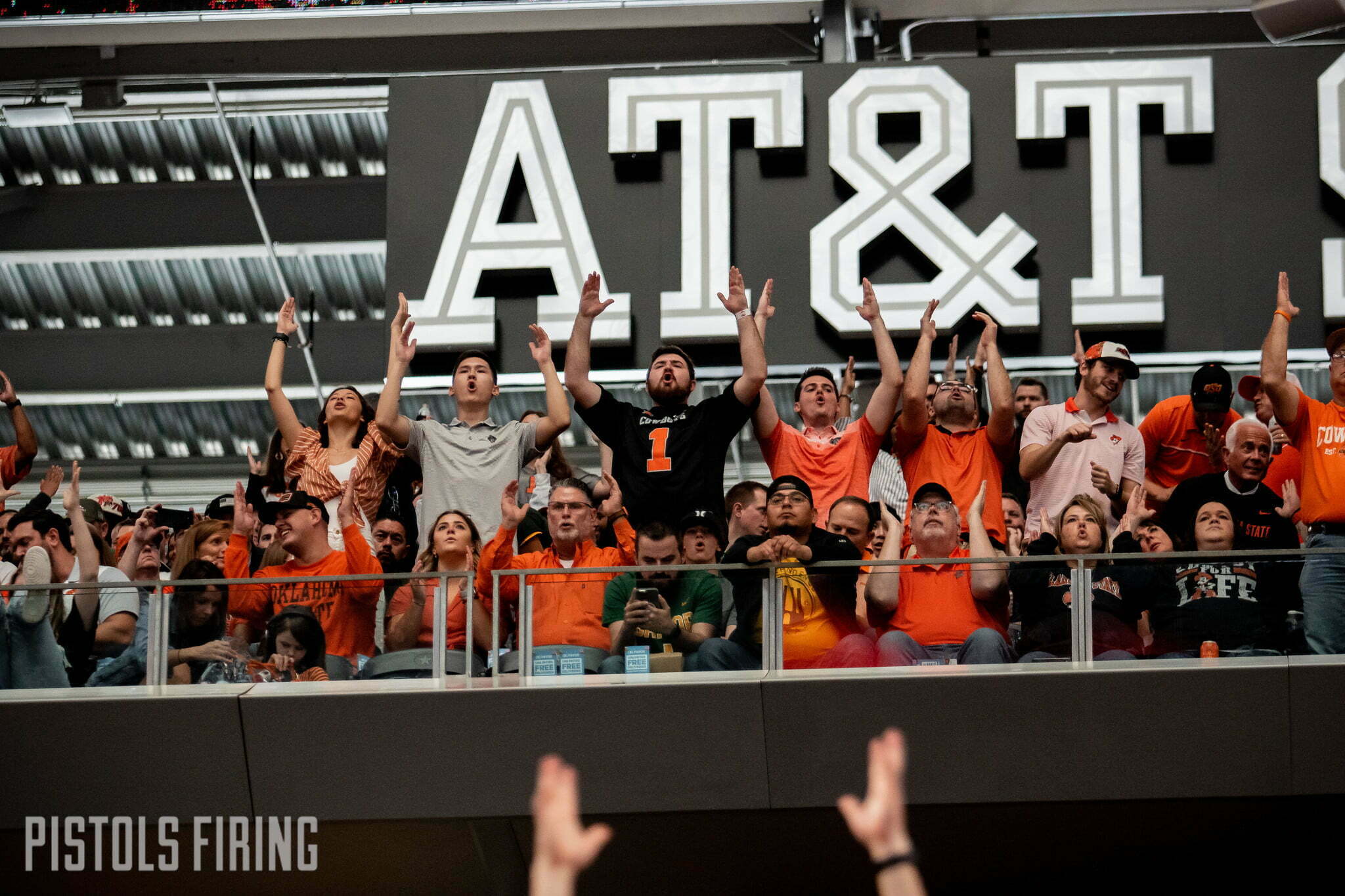 The Big Ten is reportedly in negotiations to poach USC and UCLA from the Pac-12, which would set off a major domino effect in college athletics and conference realignment with implications spreading far beyond just the Pac-12 and the Big Ten. What happens now with those leagues? What does it mean for the Big 12? For OSU? What does college athletics look like in five years?

Many, many questions with very, very few answers.

Our team has many, many thoughts on the topic at hand, of course — so let’s get to it roundtable style with an instant reaction to it all. I’m running point asking the questions but will chime in as well.

KB: First off, let’s get a vibe check. Scale of 1-10 — 10 being Mike Gundy after Central Michigan converts a hail mary to beat you at home level of stunned, 1 being it’s just a transaction that doesn’t much move the needle, how we feeling about this? I think I’m a full 10. Totally stunned. Did not see this coming at all.

Marshall: I think I’m about an eight. More movement seemed imminent, but I didn’t expect geography to get thrown of of the window like a Rudolph-to-Washington post route this soon. Mike Gundy has forewarned that the realignment wasn’t over, but it’s hard to not be surprised by something of this magnitude.

Cox: I’d say a 7-8 and not a 10 because how could you be that surprised by anything that happens in college football? Definitely didn’t see that coming. Summer bombshells are becoming the norm. Looks like CFB is taking a page from the NFL’s playbook of staying in the headlines year-round.

KB: So what does this mean for the Big 12’s long-term viability? Can it survive as is (i.e. without Texas and OU but with Houston, Cincinnati, UCF and BYU)?

My instant reaction is that to survive in this landscape the Big 12 must adapt by either adding schools — preferably from the now-ravaged Pac-12 — or branch out and pull a Texas/OU by doing what is individually best for each school. (I.e. OSU leaves for the Big Ten, but Kansas settles for a spot in the MAC.)

Marshall: For the league itself (and for the Pac-12 for that matter) it seems like doomsday is coming. Could this thing survive another five years? Maybe, but it feels like days are numbered for a lot of conferences.

Cox: I think there is a path for the Big 12 to be just fine, but I think adding some combination of Arizona/Arizona State/Colorado/Utah would go a long way in shoring up the league’s future. If a couple of those programs can’t be poached, it’s not the end of the world, as things sit now. The Big 12 is stronger due to the Pac-12’s attrition, but if the SEC and Big Ten keep upping the ante and adding more schools, you probably have to look at making some moves.

KB: Is the future of college conferences just two super-leagues (Big Ten and SEC) and then everyone else? Because it sure is starting to look that way.

Marshall: I think so. Because now, what does Oregon do when it can’t get a piece of the big money pie? What does Florida State, Clemson and Miami do when the Big Ten and SEC are raking in cash? Whether it’s two-by-two or a more sudden, widescale collapse, it feels like the Power Five will turn into a Power Two and everyone else will have to pick up the pieces.

Cox: With the vast number of Division I schools out there, I think there has to be at least four major leagues, maybe three. But I do see a scenario where the Big 12/ACC/Pac-12 get taken down another notch in national estimation and, even more importantly, revenue potential.

KB: To me I think that seems most likely, but that is excluding a lot of relevant schools. The entire ACC is just … out there! Arizona, Oregon State, Oregon, Washington in the Pac-12 are just … out there! They all have a ton of value and no perfect fit into either the Big Ten or SEC right now. Maybe that changes, but it does feel like maybe the Power Five shrinking to, say, a Power Three is a viable endpoint for all this.

KB: OK, so what happens with OSU now? What do you do if you’re Chad Weiberg? He took over basically as soon as last year’s realignment took off and now he’s sitting here as another one spins off, probably — just like you and I — wondering what in the world this means for OSU?

Big picture I think the obvious answer is that you do your darndest to try and fit into the super leagues of either the Big Ten or SEC. But that seems like a wish more than a solution, and I don’t get the feeling OSU is itching to — nor has the cache — to get into one of the Big Ten or SEC. It would solve a lot of problems but doesn’t seem likely.

Hanging tight in the Big 12 seems like the most realistic option but also the most dangerous, though. There’s strength in numbers now — as we see with the Big Ten and Pac-12 — and the new Big 12 doesn’t have that. It also doesn’t have major brand power. Adding the three AAC schools + BYU will help in coming years, but can it survive with the new TV deal upcoming? Will a merger with, say, the Pac-12 be necessary? I have no idea the answers. But it feels like today that the solution of simply adding Houston, Cincy, UCF and BYU to help offset the losses of OU and Texas are no longer viable long-term answers to keep OSU and the Big 12 afloat.

Scott: If you’re OSU, or any school not in the SEC or Big Ten, you have to do what is best for you at a time like this. The Big Ten and SEC are at 16 teams apiece now. Early reports say the megaconference model could include 20 teams. You gotta do your best to be one of those 40 institutions.

Cox: I get that you make another elevator pitch to get in with one of those two leagues, but you’re not banking on that. Outside of joining either the SEC of Big Ten, the only option is to double down on the Big 12 and do whatever it takes to strengthen your own conference. Again, best likely scenario in my mind is if the Big 12 can add a couple of the Pac-12’s leftovers. Say goodbye to your Saturday nights.