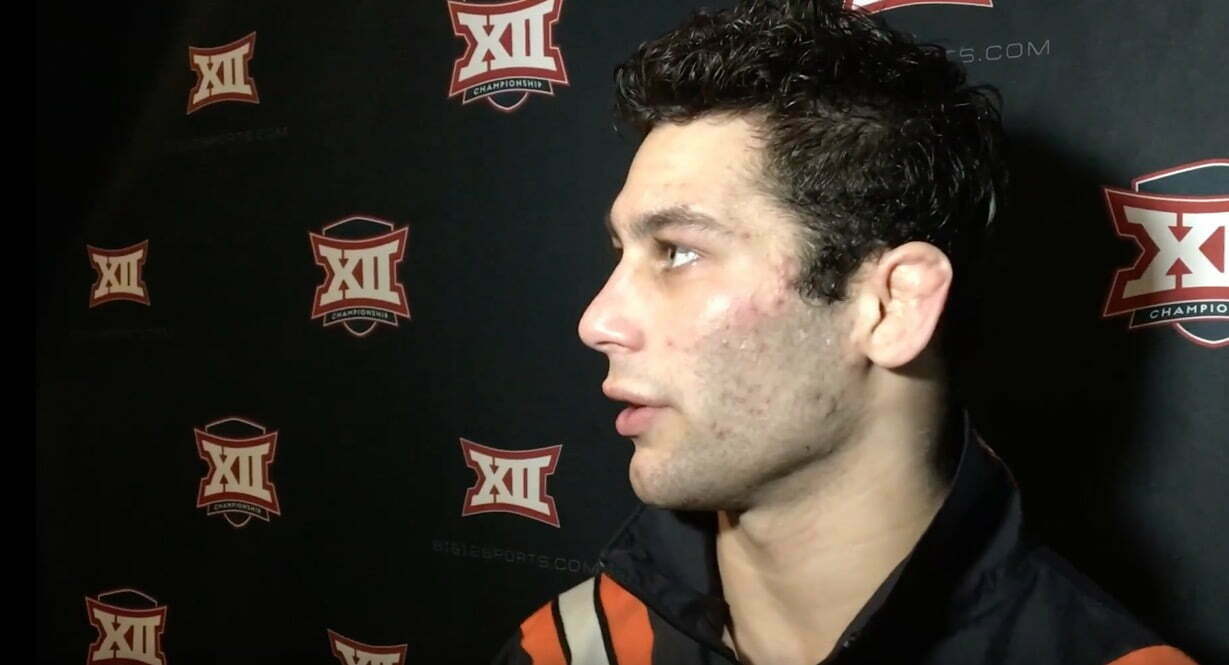 Nick Piccininni’s veins jutted from his body as he screamed and sprinted down the red carpet back to his Oklahoma State teammates in the tunnel at the BOK Center on Sunday. Piccininni, a 125-pound freshman wrestler, was a Big 12 champion, and it was the most electric moment of the championships.

Piccininni took down North Dakota State’s Josh Rodriguez, the tournament’s No. 1 seed at 125, in a 7-5 decision in the second period of a tiebreaker. The match went into sudden victory tied at 4 but neither wrestler could score, so it went to the tiebreaker. That’s where Piccininni earned the clinching takedown.

“I was just pumped,” Piccininni said. “When it comes to a point like that and it’s overtime, you get that takedown, it’s pretty awesome. … I’m wrestling at the highest stage and the highest level of competition I’ve ever wrestled at in my life, so it’s definitely one of the biggest wins I’ve ever had.”

A New York product, Piccininni grew up on Long Island 1,500 miles away from Gallagher-Iba Arena. The culture was complete different when he got to Stillwater, but having OSU printed on his warmups and wearing the orange singlet made it all much more powerful, he said.

“That’s what it’s about,” Piccininni said. “That’s the reason why I came here. I embrace (Stillwater). I like it. I like my teammates. I like my coaches, so it’s easy.”

After the NCAA Tournament though, OSU fans might not see much more of Piccininni. Commit Daton Fix is the next in line in Cowboy lore. He wrestles at 125 pounds as well and posted a 168-0 high school record with four state titles.

The best way for Piccininni to have a shot at starting next year at 125 is by winning in two weeks at the NCAA Championships in St. Louis.

“You know what? I’m going for it,” Piccininni said. “No one goes to NCAAs and says they don’t wanna place, so I’m going for that national title.”

The Greatest Impressed By Son

Before the Big 12 Championships, Joe Smith was the only Cowboy in the starting lineup who hadn’t qualified for the NCAA tournament.

With how he wrestled in Tulsa, he probably should have earned two bids. Smith swept his weight class with a 16-0 technical fall in the quarterfinals and an 8-0 major decision in the semis. In the 159-pound final, he won by another 8-0 major.

Smith was one of three OSU wrestlers who did not allow a single point through the tournament.

His dad was there to watch it all.

Joe fought a knee injury for about two weeks. His training regimen had to change, and adapting to that helped his success in Tulsa, he said.

“It’s pretty much 100 percent now, and I can do the things I wanna do to wrestle my style,” Joe said.

His coach said now that he’s healthy, Joe has started to mount his approach to NCAAs.

“There’s more in him,” coach John Smith said. “He needed to find himself through three matches. I don’t think he’s wrestled three matches since January.”

It was only fitting because Crutchmer, an OSU senior, grew up in Tulsa with the walls of his bedroom designed as an OU football stadium.

Soon after the chanting, the first period ended, and he had a 3-1 lead. Crutchmer said wrestling in his hometown to finish his Big 12 career was special.

Reed suffered a left ankle injury in the second period. Trainers had to tape his ankle on the floor, and he could hardly walk on it. But he fought through it. Crutchmer said that didn’t change a thing. In fact, because it was Bedlam, there was a little extra, he said.

“Me being here, I felt a little bit more pressure than I probably would have if I was somewhere else,” Crutchmer said. “It’s Bedlam no matter where it’s at, if it’s there, if it’s here, anywhere. If we wrestled at nationals, it’s Bedlam.”