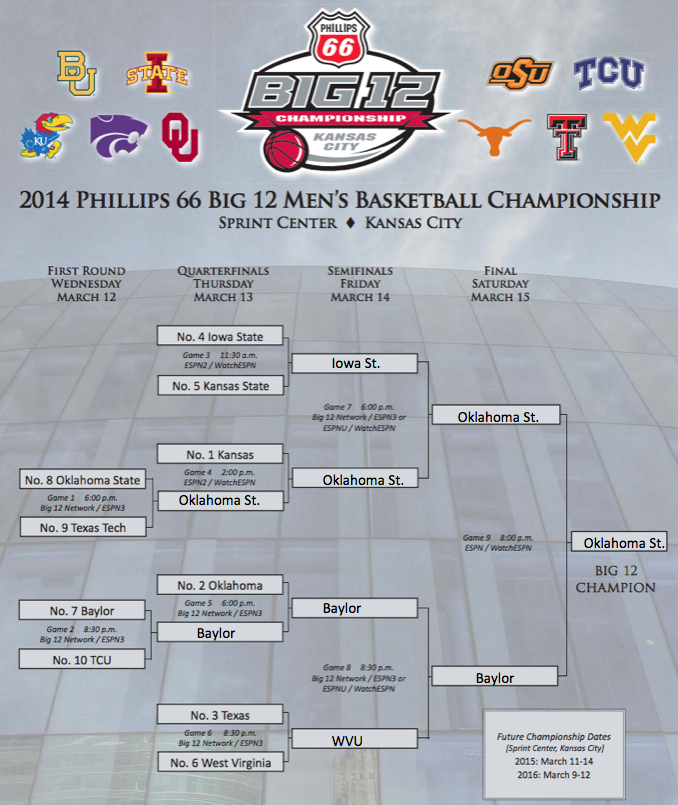 That’s right, I have the first ever Day 1 champ in Big 12 Tournament history and it’s the team that finished 8th in the Big 12 this year as well as the school I attended.

I just don’t think Kansas is that good without Embiid. You guys saw how well they played away from Phog Allen in their final few games (OSU, WVU) when he went down. They’ll have a good crowd and Wiggins is playing really well so I could be way off but I think OSU can take them.

Speaking of teams that aren’t playing well, Texas will lose to WVU. If we were doing confidence points I’d have all of mine on that game.[1. This means Texas will definitely win by 20+.]

Iowa State-Kansas State is a toss-up to me and I think the winner could win the whole thing but I just don’t feel like either team is better than the Pokes on a neutral court.

My final might be a 33-31 slugfest with the legs those two teams will be dragging around by Saturday night but we have Marcus and they don’t (well, Kansas State does, but I don’t have OSU playing them).

Call it a homer pick if you want[1. If you’ve been reading all season, you definitely won’t.] but I think OSU wins the 2014 Big 12 Tournament.